Learn to make cajeta, a Mexican confection with multilayered sweetness and history 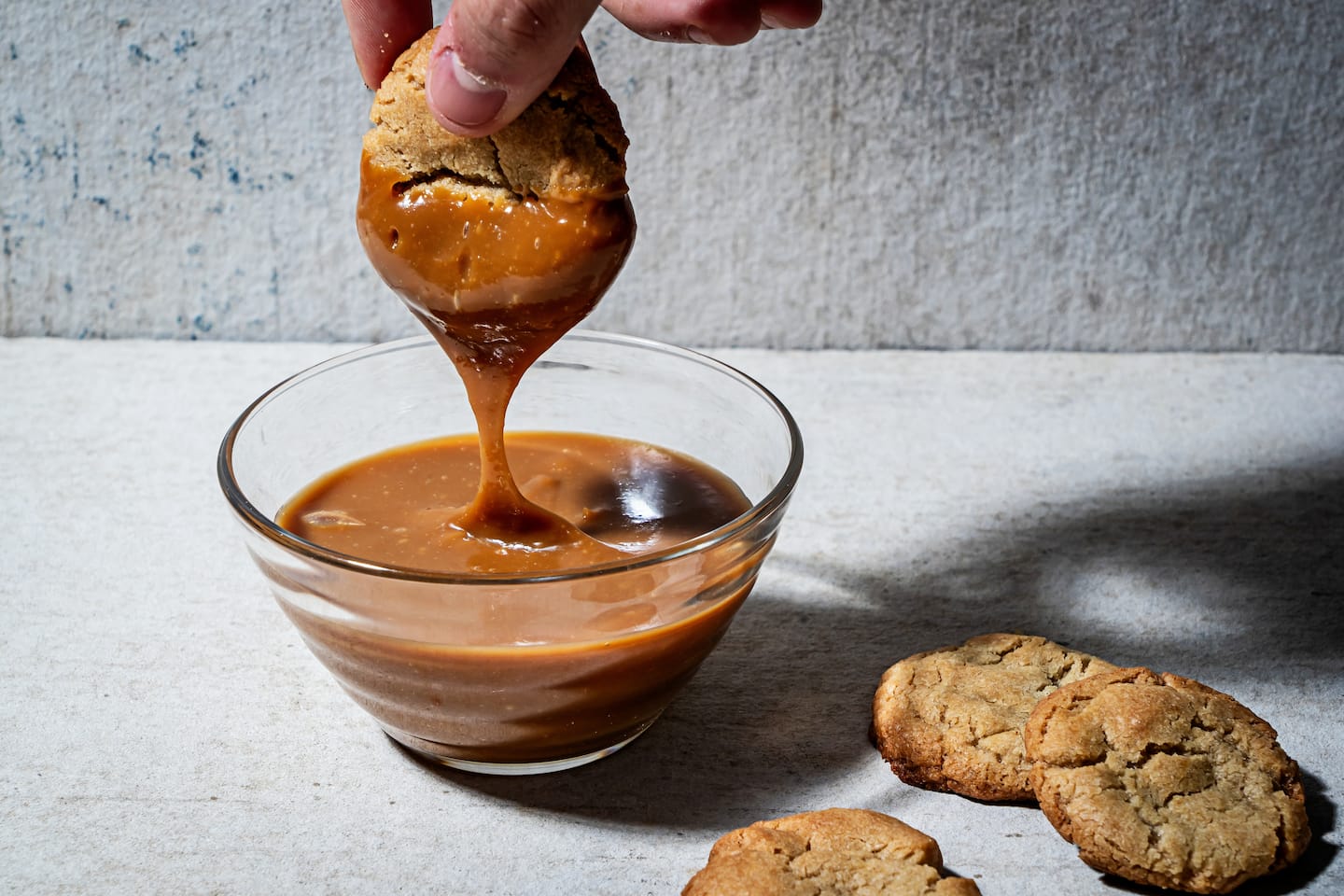 When we describe cajeta as a Mexican type of dulce de leche, it may sound like Mexico riffed on the Argentine specialty. In fact, Mexico may have started producing cajeta long before Argentina began producing its confection.

Popular legend claims that dulce de leche was created by accident in the 19th century when a distracted servant of Gen. Juan Manuel de Rosas left a pot of boiling milk and sugar unattended. Everyone loved the resulting milk jam, including the general, who eventually ruled Buenos Aires. Thus, dulce de leche became an essential part of Argentina’s culinary heritage, until the country tried to make it official before UNESCO and the World Trade Organization, and Uruguay protested. Now both countries share joint custody of dulce de leche as their thing.

“The ancient recipe from Indonesia migrated to the Philippine islands, then under Spanish rule. There, it was called ‘dulce gatas.’ Dulce de leche culture spread to America when Filipinos sailed the Pacific, particularly to the Acapulco area. In Mexico, they used goat’s milk and, notably, they incorporated a native flavoring, vanilla,” Balmaceda wrote.

Dulce gatas combines the Spanish word for “sweet” with the Tagalog word for “milk” and is most often made with the milk of the carabao (a type of water buffalo), muscovado sugar and baking soda, and it has a slightly grainy texture.

So how did dulce gatas find its way to Mexico? In the mid-16th century, Spain colonized the Philippines and called upon Mexico, as the viceroyalty New Spain, to govern there. The Spanish opened the Manila-Acapulco Galleon Trade Route, which led to importing dulce gatas, and they had brought goats to New Spain, developing the breed Criolla Negra for milk production. From there, the recipe likely was adapted to make use of surplus milk.

But cajeta’s history, like its flavor, is more complex than that.

As early as 1000 B.C., people in what are present-day China and India began cultivating sugar cane, after getting it from Australian explorers. Confections soon followed, some made from water buffalo’s milk and others made with cow’s. To this day, rabri, an Indian sweet, is made with caramelized milk, cardamom and dried fruit and nuts, to say nothing of countless milk-based fudgy sweets. Through trade routes and migrations, Arabs, Greeks and Persians discovered, and then created, their own versions, such as the milk pudding mahalabiya. In the 8th century, as Moors conquered most of Spain, they brought caramelized milk sweets to present-day Andalusia, where nuns and friars refined their own variations over the centuries.

When the Spanish colonized Mexico, they established missions with their candy-making nuns and friars. “Seventeenth-century manuscripts from Mexican convents show the development of the cajeta recipe,” says Maite Gomez-Rejón, art and culinary historian, educator and founder of ArtBites.

The first Spanish-language recipes in Mexico were written by poet, philosopher, composer and nun Sor Juana Inés de la Cruz, who was fascinated by food science, especially involving sugar. One of her writings is called “rules for all cajetas,” by which she meant convent-crafted, milk-based sweets packaged in little wooden boxes. Caja means “box” in Spanish. “So that’s what cajeta means … this little box,” Gomez-Rejón says.

“The convents were getting the first dibs on anything that was coming into the country from the galleons,” Gomez-Rejón says. “And they were experimenting and really inventing modern-day Mexican cuisine.” A manuscript from the Santa Monica convent in Puebla has a recipe for cajetas corrientes (or common cajetas,) which calls for both cow’s milk and goat’s milk.

“So we see this spread from convent to convent before it gets to Guanajuato, where it’s made exclusively from goat’s milk” thanks to the prolific production in that region, Gomez-Rejón says.

There the cajeta industry flourishes, and today the city of Celaya in particular is known for the sweet. Perhaps because Guanajuato is also known as the cradle of Mexican independence, cajeta was chosen as the official dessert of Mexico’s bicentennial in 2010.

The friars had a hand in cajeta’s development as well. “First of all, the friars were all making bathtub booze,” says Claudette Zepeda, culinary anthropologist and executive chef of the forthcoming Alila Marea Beach Resort Encinitas. They contributed their liquors to create what would become known as cajeta envinada. This translates to “with wine,” but all manner of spirits, such as rum and brandy, are used. Zepeda has been experimenting with vinegars such as tepache (made from pineapple) in her cajetas.

Zepeda also notes another important historical convergence in El Bajío, where metals and minerals such as copper were mined. “Copper is a metal that conducts a lot of heat, but it disperses it evenly throughout the mixture,” she explains, making it an excellent metal for anything that cooks for a long time over low heat. Friars and nuns “saw an opportunity to cook sugars at a controlled temperature over an open fire, and that’s how it started.” Applying European cooking techniques with locally made copper pots, they turned out the smooth, glossy caramel that defines cajeta.

Zepeda also suspects friars and nuns used cajeta and other sweet confections to lure Indigenous children into the missions to learn about Christianity. In her travels around the world, Zepeda says she has noticed that “usually the kids may not speak English, but they know candy.”

Nowadays you can pick up a jar of cajeta, most likely sold in a squeezable bottle rather than a little box, at any supermarket that serves a Mexican American community. But it’s simple enough to make at home, and goat’s milk is surprisingly easy to find in most dairy sections. You don’t need a copper pot, either. Channel the nuns of colonial Mexico and concoct your own saucy, sticky creation.

Cajeta, a caramel sauce traditionally made with goat’s milk, can be drizzled over ice cream or pancakes, spread on thin cookies, and used to make tres leches cake or for dipping fruit. It is, best of all, eaten straight out of the jar with a spoon.

The sauce is incredibly forgiving because of the amino acids in the goat’s milk, which make it more stable, so it doesn’t scorch as quickly as cow’s milk. For best results, simmer; if it starts to boil, simply lower the temperature, stirring every few minutes, and it should be fine. The baking soda neutralizes the milk’s pH levels and makes cajeta smooth. It also assists with the Maillard reaction, the browning of amino acids with sugars to create caramel.

Make Ahead: The cajeta needs to be prepared at least 2 hours before you plan to serve it, to allow for sufficient cooling.

Storage Notes: The cajeta can be refrigerated for up to 1 month; after that it starts to crystallize. It is thicker when cold; rewarm at 50 percent power in 30-second bursts to get the desired consistency. You can freeze cajeta for up to 1 year. Make sure you cover the surface with plastic wrap and leave a little clearance at the top of the container for expansion.

Where to Buy: Goat’s milk can be purchased at well-stocked supermarkets and health food stores.

Pour the milk into a 4- to 6-quart heavy-bottomed pot and set over medium-high heat. Sprinkle the baking soda over the milk, then whisk to combine. Whisk in the sugar to combine, then switch to a silicone spatula and bring the mixture to a boil — the milk will foam and rise up. Remove the pot from the heat just before the foam reaches the top.

Reduce the heat to low. When the foam subsides, return the pot to the heat and bring to a simmer, gradually raising the heat to medium. Maintain a lively simmer and cook until the mixture reduces and turns a golden brown, stirring every 2 to 5 minutes to prevent scorching on the sides and bottom, about 1 hour.

Stir in the salt, raise the heat to medium-high and, now stirring constantly, bring the cajeta to a low boil, until you start to catch glimpses of the bottom of the pot, about 15 minutes. You can stop here for a pourable, sauce-like consistency. Or, for a thicker, more pudding-like consistency, continue cooking for an additional 5 to 10 minutes. Keep in mind that the cajeta will continue to thicken as it cools.

Remove from the heat and continue to stir until the cajeta stops simmering. Mix in the vanilla, if using, and scrape the cajeta into a 2-cup (480-milliliter) glass jar with a lid. Press a piece of plastic wrap against the top of the cajeta; this prevents a skin from forming. Let cool completely, then cover with a lid. If not using it right away, refrigerate until needed.

You can use white sugar or light brown sugar instead of dark brown sugar, depending on your taste. White sugar will result in a slightly sweeter, lighter cajeta.

You can use cow’s milk for this recipe, but it will require constant stirring and a more vigilant eye.

If you want to add liquor, such as rum, or flavoring, do so during the last 10 minutes of cooking. To make a cinnamon-flavored cajeta, for example, start with 2 teaspoons of ground cinnamon.

If the cajeta turns out thicker than you wanted, add warm water, milk or rum, a little at a time, until you reach the desired consistency.

Cajeta can be used in many recipes that call for dulce de leche. Here are some ideas from Voraciously: