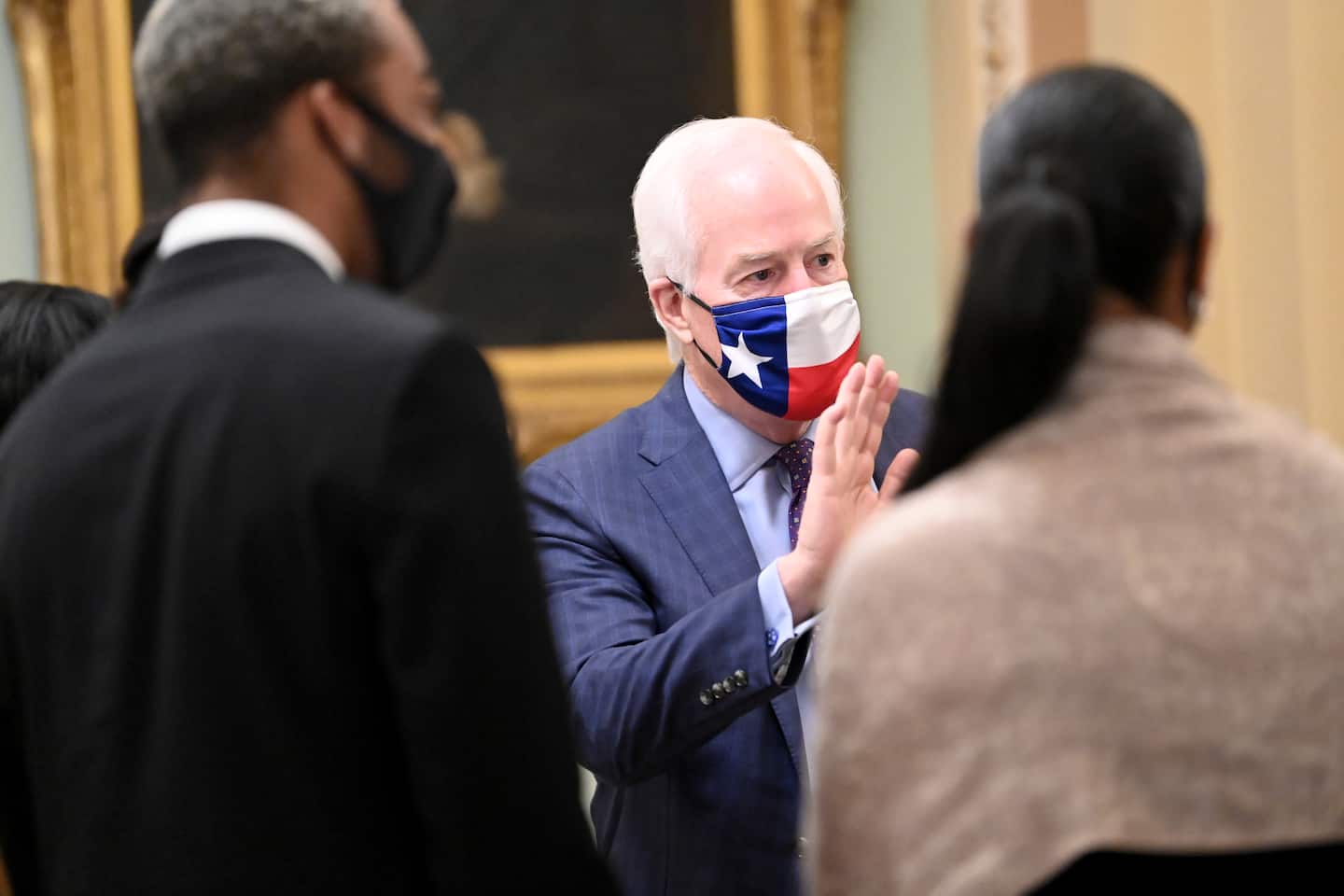 Today, that effort is evolving, as best exemplified by a tweet Monday in which a Republican senator suggested the president is something amounting to a Manchurian Candidate.

“The president is not doing cable news interviews,” said Sen. John Cornyn (R-Tex.), copying text from a Politico piece on Biden’s low profile. “Tweets from his account are limited and, when they come, unimaginably conventional. The public comments are largely scripted. Biden has opted for fewer sit down interviews with mainstream outlets and reporters.”

Then Cornyn got to the point: “Invites the question: is he really in charge?”

Cornyn’s tweet builds upon a whisper campaign among conservatives that perhaps Biden isn’t actually engaged in doing his job. Some have even suggested that Vice President Harris is actually in charge or will be soon — a suggestion that, at its worst, carries real dog-whistles given her status as the first woman and first Black person to hold that job.

It’s a baseless and ugly bit of innuendo. There is no question the White House — just as the Biden campaign did — has motives beyond good government for keeping a lower profile and keeping Biden on-script. He has for years made a habit of stepping in it with his public comments. And the stakes are significantly higher now that he is the leader of the free world.

But there is no legitimate reason to believe he is not making all the kinds of decisions a president usually makes behind closed doors. Biden’s familiarity with the issues is significantly more demonstrated than his predecessor’s was. Trump often seemed unaware of basic policies and key legislative initiatives, and he repeatedly contradicted his own officials. Despite this, Trump’s involvement in making key decisions was never questioned by Republicans like Cornyn.

It’s a pretty transparent and desperate strategy, given Biden’s current standing. It’s also a revealing one.

Republicans have few people to blame but themselves (and, more specifically, Trump) for how sustainable and successful Biden’s approach has been thus far. Perhaps the most-mocked part of Cornyn’s tweet is when he cites Biden’s “limited and … unimaginably conventional” tweets. Again, this is actually a quote lifted from the Politico piece (although Cornyn doesn’t use quotation marks to make that clear). The implication is this is somehow a bad thing.

It should also be noted here that, while Biden’s lack of tweets is apparently a strike against him for Republicans like Cornyn, they frequently dismissed Trump’s tweets as essentially the insignificant ramblings of a random Twitter user — rather than the declarations of a U.S. president.

But even beyond the tweeting, it was clear that Trump fatigue was a feature of the Trump presidency. The same Post-ABC poll showed that just 3 in 10 people said that the more they heard about Trump, the more they liked him. A Pew Research Center survey just before the election showed that 65 percent of Trump supporters were worn out by too much election coverage, compared to just more than half of Biden supporters. A huge body of reporting showed people who otherwise supported Trump wished he would get out of his own way.

All of it created a real — if not decisive — premium on Trump’s opponent promising a more traditional presidency, for which Biden was the Democrats’ most obvious candidate. “You won’t have to worry about my tweets when I’m president,” he said in the summer of 2020.

And it has seemingly worked. Biden currently enjoys a majority approval rating, with positive views outpacing negative ones by about 14 points — numbers Trump never touched at any point in his presidency. Biden has also done better, more notably, on some of the key issues of the day, such as his coronavirus response, suggesting that people hardly judge him negatively for not being more of a public presence on those issues. It’s quite possible he’s still in a honeymoon period and that people will demand more of a public presidency in the months and years to come. But right now he has very little incentive to allow Republicans to goad him into that, thanks to their inability to get Trump to tone it down.

Perhaps more than anything, though, Cornyn’s attack reinforces a byproduct of Biden’s low-profile strategy: the inability to caricature him and make him the issue. Republicans mounted little in the way of a robust effort to halt his coronavirus relief bill and are struggling to build one against his infrastructure and jobs plan. Even with these trillions of dollars in codified and proposed spending, their efforts to label him some kind of radical leftist have fallen short.

This is also something that traces back to the 2020 campaign, when Republicans argued that Biden would be a conduit for more extreme elements of his party — an attack that effectively granted that Bidenwas not so extreme.

Today, with Biden pushing historic spending, Republicans such as Cornyn are still apparently conceding their inability to use that to turn him into a boogeyman. Instead, they want to attach these proposals to other, supposedly shadowy figures in his administration — albeit with precisely zero actual evidence.