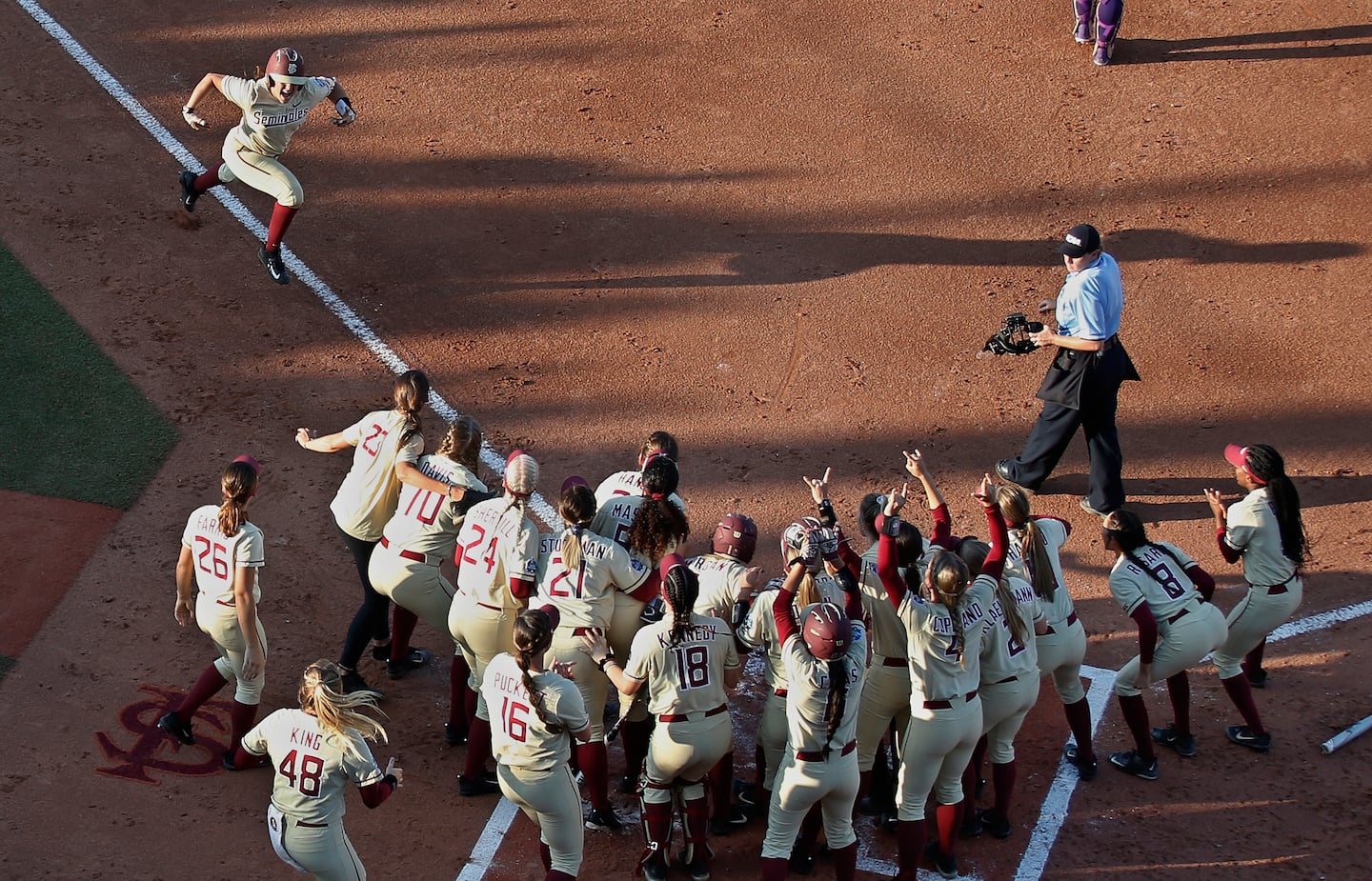 “Do the men have showers?” one softball coach said. “For us, we don’t have the opportunity to shower. We just get in our bus and go back to the hotel.”

But under the microscope focused on the NCAA’s treatment of women athletes, there may be no better contrast than the men’s and women’s College World Series.

The baseball and softball championships have become marquee events in the cities that host them, with large sellout crowds and the games drawing similar audiences on ESPN. But the tournaments remain unequal. Softball athletes play in a stadium with less than half the capacity and subpar facilities, and their tournament is condensed into a much smaller window than the men’s. And that’s after what coaches describe as a years-long battle with the NCAA for such basic amenities as bathrooms, which were eventually added, and showers, which they’re still waiting for.

Jacquie Joseph, who has spent three decades as the head coach at Michigan State, said the events of last month were the tip of the iceberg at the NCAA championships.

“Women’s basketball is the premier women’s sport,” Joseph said. And yet, she said, even they were left with “scraps” compared to the men.

“When I saw that, what I wanted to say is, ‘Imagine how we feel, the rest of us?’ They’re the chosen ones, and they’re treated like afterthoughts. What’s lower than an afterthought? That’s us.”

A solution that stunk

The men’s College World Series is one of the NCAA’s marquee championships, drawing an average of 22,000 fans per game to Omaha every spring to watch future pros ping balls around $131 million TD Ameritrade Park.

But on television, the Women’s College World Series draws nearly as many viewers as baseball. While the ratings for the NCAA men’s basketball championship far outstrip the women’s, the softball tournament drew an average of 1 million viewers over the 2019 tournament, according to ESPN, while baseball drew 1.1 million.

ESPN, which airs both championships, considers the sports to be roughly equal in value to the network, according to a person familiar with the sports’ television rights. The network paid $500 million in 2010 for the right to broadcast the two events, along with the women’s basketball tournament and nearly two dozen other championships, until 2024.

In Oklahoma City, the Women’s College World Series has become a marquee event in its own right: ESPN has dubbed it “the center of the softball universe.” Coaches and players praised the city for its dedication to softball and said the event — the biggest stage most softball athletes will ever have a chance to play on — was a positive, memorable experience.

But the venue where the tournament is hosted, USA Softball Hall of Fame Stadium, has lagged behind the men’s facilities for years by virtually every measure. Coaches recall a series of frustrating battles with the NCAA and their hosts for the most basic amenities.

Until 2011, there were no locker rooms; players changed into their uniforms at their hotels or on the bus. There were no bathrooms in the stadium dugouts, forcing players to run along the baseline or into the stands to share bathrooms with fans. When coaches begged for bathrooms, they arrived the next year at the tournament to find a portable toilet waiting for them in the dugout.

“I used to tell my players to go before the game, because how would you like to be caught coming out of a Porta-Potty on national TV?” one coach said. “And then there was the smell.”

The NCAA has been part of a push to get Oklahoma City to improve the stadium over the years, including a renovation that added changing rooms and, in 2014, dugout bathrooms. The stadium remains the country’s premier softball facility. But there have been more battles since, including for a batting cage that wasn’t open to the wind and rain.

Carol Hutchins, the head coach at Michigan, described a longtime sentiment among women’s college coaches: “The NCAA never asks, ‘What’s the least we can do for the men?’ With the women, that’s always the question.”

“We have to fight to get things,” Hutchins said. “We’re fighting with the NCAA, and it all comes down to, they don’t want to spend the same on the women.”

The women’s stadium capacity remains far below the men’s. Until 2019, Hall of Fame Stadium could hold only 9,000 people; every year, tickets to the Women’s College World Series sold out virtually overnight. TD Ameritrade Park holds 24,000, with the ability to expand to 35,000.

The women’s stadium added 4,000 seats in 2020 with funding from a city bond initiative, allowing it to accommodate 13,000. But before the championship was called off because of the coronavirus pandemic, Hall of Fame Stadium had already sold out every new seat — filling its newly expanded capacity.

The NCAA has agreed to keep the softball championship in Oklahoma until 2035, with no concrete plans to add more seating or facilities, according to a stadium spokesperson. The deal, softball leaders say, has limited their sport’s ability to grow and generate revenue — again offering what they see as the minimum.

“I think we could easily get 20,000 [fans] just like the men,” said one longtime head coach, who, along with other coaches, spoke on the condition of anonymity because of concerns about professional repercussions. After all, she said — they’ve already proved they can do it on TV. “But we won’t get that chance.”

It took the prism of the NCAA’s basketball tournament bubbles this year — two supposedly identical events — for a controversy to ignite over disparities. Unlike basketball, softball and baseball are different sports, with different venues and requirements, making direct comparisons more difficult. But the manuals sent to teams playing in each championship lay out clear differences.

In 2019, the men’s tournament offered a “team dinner” for all eight teams, including meals for 20 additional “VIPs” at each school. The women’s tournament manual advertised a reception with “heavy appetizers” that was only open to players and staff traveling with the team.

For the men, there is a parade. A VIP golf outing. A free massage day hosted by Creighton University — “a wonderful opportunity for teams to meet and experience massage treatments before the Series,” the manual advertised, with opportunities to arrange for massages throughout the tournament.

One softball coach, asked if she remembered a massage day for her players, answered, “Jesus God in heaven, no way.”

Perhaps no disparity frustrates softball leaders as much as their event’s ultra-condensed schedule: just seven days, compared with 12 for the men. In the women’s tournament, teams get a single rest day and are asked to play doubleheaders if they lose an early game. There is no room for weather delays and no days of rest before the final series. In the men’s tournament, there are frequent rest days, and teams can have as long as three days off before the finals begin.

The schedule can take a grueling toll on players’ bodies, softball leaders said.

As a pitcher at Arizona, Taryne Mowatt-McKinney threw a staggering 1,037 pitches during the seven-day span of the 2007 Women’s College World Series, a record. The third day of that stretch, she said, was the hardest: a weather delay meant Arizona hadn’t finished its second game the night before until after midnight, and then the Wildcats were on the field again 12 hours later.

As a player, Mowatt-McKinney said, “It’s completely worth it,” even the grueling doubleheaders. The feat made her one of the most recognizable names in softball, winning her an ESPY award for best female athlete.

But as a pitching coach at Arizona, Mowatt-McKinney also thinks about the toll that the tournament’s tight schedule takes.

Four Power Five softball coaches said they have asked the NCAA to consider a more forgiving schedule — eliminating the need for doubleheaders or adding a rest day. But extending the length of the tournament, coaches said they were told, was too costly or prohibited by television schedules.

ESPN, in a statement, disputed that its broadcast was the reason for the tournament schedule. “ESPN and the NCAA have productive, regular dialogue on ways to grow the sport and increase interest and viewership in the overall Championship. Ultimately, the format of the event itself is decided on by the NCAA, just as it is for all NCAA Championships.”

The controversy at the basketball tournament in March has prompted some softball coaches to consider trying to push the NCAA again to expand the tournament, giving their players rest and room for weather delays. At a Power Five coaches’ meeting this month, coaches discussed the idea, according to someone on the call, hoping to seize on an opportunity created by women’s basketball.

They would not be the first women’s college sports leaders outside of basketball to use the moment to put pressure on the NCAA.

When coaches at the women’s volleyball championships this month were briefed on their event, they discovered the NCAA was providing subpar practice surfaces. Some teams were likely to have no locker rooms, they were told, and early games would be aired with no commentary.

They quickly went public with their concerns, prompting promises from the NCAA to fix some of the issues. One of those accommodations: bringing in large tents to serve as temporary locker rooms in the tournament facility.

The public protests were a model taken directly out of the women’s basketball playbook, top volleyball coaches said, and with an eye toward the NCAA’s outside investigation.

“There’s an open window right now that gives us a seat at the table, which women’s volleyball hasn’t had,” said Mary Wise, the coach at Florida.

After the controversy played out on Twitter, Wise said she got a call the following morning from a top SEC official, who asked for her input on gender equity issues and what the NCAA could do to improve the tournament.

“She asked my opinion,” Wise said. “That doesn’t usually happen.”