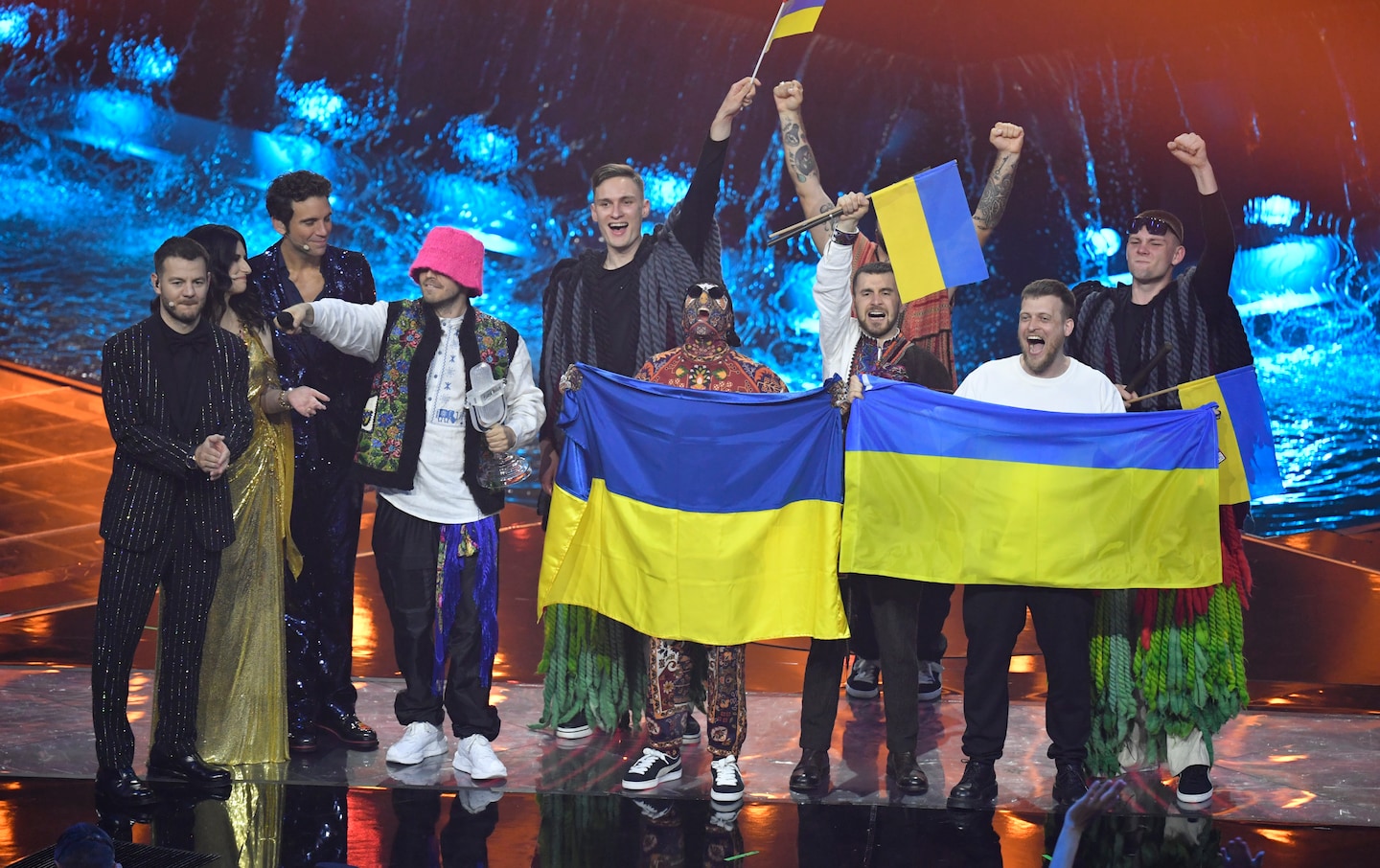 When the hosts of this year’s Eurovision Song Contest in Turin, Italy, announced the popular vote results for Ukraine, a crowd that had gathered at the Italian Embassy in Washington on Saturday for the European Union’s watch party erupted into cheers. Then a technical glitch interrupted the streaming broadcast. The party guests gasped.

Just seconds after learning that the Ukrainian folk-rap group Kalush Orchestra would gain 439 points and topple every other country on the leader board, the live stream had cut out, leaving frontman Oleh Psiuk’s elated — and now pixelated — face frozen on the screen.

It was a strangely specific time for a technical glitch. In the age of cyberwarfare, some might say too specific.

While Ukraine moved from fourth to first after the public vote, final results for Sweden, Spain and the United Kingdom — which led the jury vote — had yet to be announced. Ukraine hadn’t snatched a victory just yet.

Soon, there were impatient boos.

“Okay that’s it. Everyone go home,” a woman dressed in a blue T-shirt with a gold E.U. logo joked, as if she’d hijacked the broadcast to declare Ukraine victorious herself.

“It’s always the Italians!” another person exclaimed, forgetting, perhaps, that it is not Italy, but Russia that excels at cyberattacks of this variety.

Attendees reached for their phones, looking for the quickest update they could find online, when the live stream twitched back to life. It was clear that whether they were waving Serbia flags or decked out in Sweden gear, most guests were rooting for at least two countries. And when Ukraine won, it seemed as if everyone else had, too.

The win comes at a time when Ukraine is in a mortal fight for its independent identity, giving the cultural flourishes of Kalush Orchestra’s traditional-folk-meets-contemporary-rap song, “Stefania,” a sense of added gravitas. It is seen as a continentwide cry of support for Ukraine and a resounding condemnation of Russia’s invasion.

Ukraine first performed at Eurovision in 2003 and won in 2004 and 2016. Ahead of this year’s competition, Kalush Orchestra had to practice virtually before finally gathering safely in Lviv. On Saturday, Ukraine’s Eurovision commentator Timur Miroshnychenko broadcast from a bomb shelter.

This year marks perhaps the only time that war on European soil has come to significantly shape the show. A day after Russia invaded Ukraine in February, it was banned from participating the competition. Leading up to the Grand Final Saturday night, Ukraine’s Kalush Orchestra emerged as the favorite.

And that was clear Saturday at the Italian Embassy, where a few hundred people — largely E.U. delegation staff, personnel from European embassies and their friends — gathered around two large screens in a large, high-ceilinged hall. Two attendees near the entrance wore huge boas, which had shed piles of blue and yellow feathers on the floor. Several guests donned sunflower pins. And one woman paired blue socks with bright yellow sneakers. The E.U.’s signature blue and gold seemed interchangeable with Ukraine’s.

During Nadir Rustamli’s performance, Rufiat Aghayev, an Azerbaijan native and former TV host who has attended several Eurovisions, posed in front of the screen with a flag from his homeland in one hand and a Ukraine flag in the other. “We are good friends” he said of the two countries, “We are hoping they will win. They need it more now. The whole world is supporting them.”

Much of the voting at Eurovision reflects diplomatic relations — and grievances — between neighboring countries. In 2021, not long after Britain left the E.U., the country received zero votes. Liv Heinrich, a student from Germany, was interested to see who former Soviet states would support this year. Historically, some had used Eurovision as an opportunity to curry favor. “The absence of Russia will change voting dynamics,” she said.

While Eurovision officially aims to stay out of politics, it has not always been successful. In 2019, the host organization, the European Broadcasting Union, fined Iceland after rock group Hatari held up a Palestinian flag during the vote count to protest the Israeli occupation. Last year, Belarus was expelled after the EBU requested that the band Galasy ZMesta rewrite their song, which originally made fun of protests against their authoritarian leader Alexander Lukashenko.

Ukraine’s entry to the competition “Stefania” is, at first listen, far from political. Written by Psiuk about his mother, it has a sweet chorus that translates, “Stefania, mama, mama, Stefania/The field is in bloom, but her hair is turning gray/Sing me a lullaby, mama/I want to hear your dearest words again.”

Since the invasion, the song has become something of an anthem in the war-ravaged country, with people interpreting “mother” to mean Ukraine.

“Stefania” was one of the few songs to elicit collective applause at the embassy, in a room with bad acoustics, where it was difficult to hear anything at all. Members of the Ukrainian Embassy also made a quiet appearance at the event and could be seen nail-biting and teary-eyed as results were announced that their country had won.

Vlad Novac, a hospitality employee, came out to cheer for his home country of Moldova, and of course, Ukraine. Eurovision “is always about a little more than the music,” he said. “At the end of the day, it shows what the continent is feeling.”

Ask Elaine: I’m turning 30. Are my best days behind me?

Can this quirky Naval poetry tradition make a comeback?

Ex-Fed economist offers odds on avoiding a recession: ‘Less than 50-50’