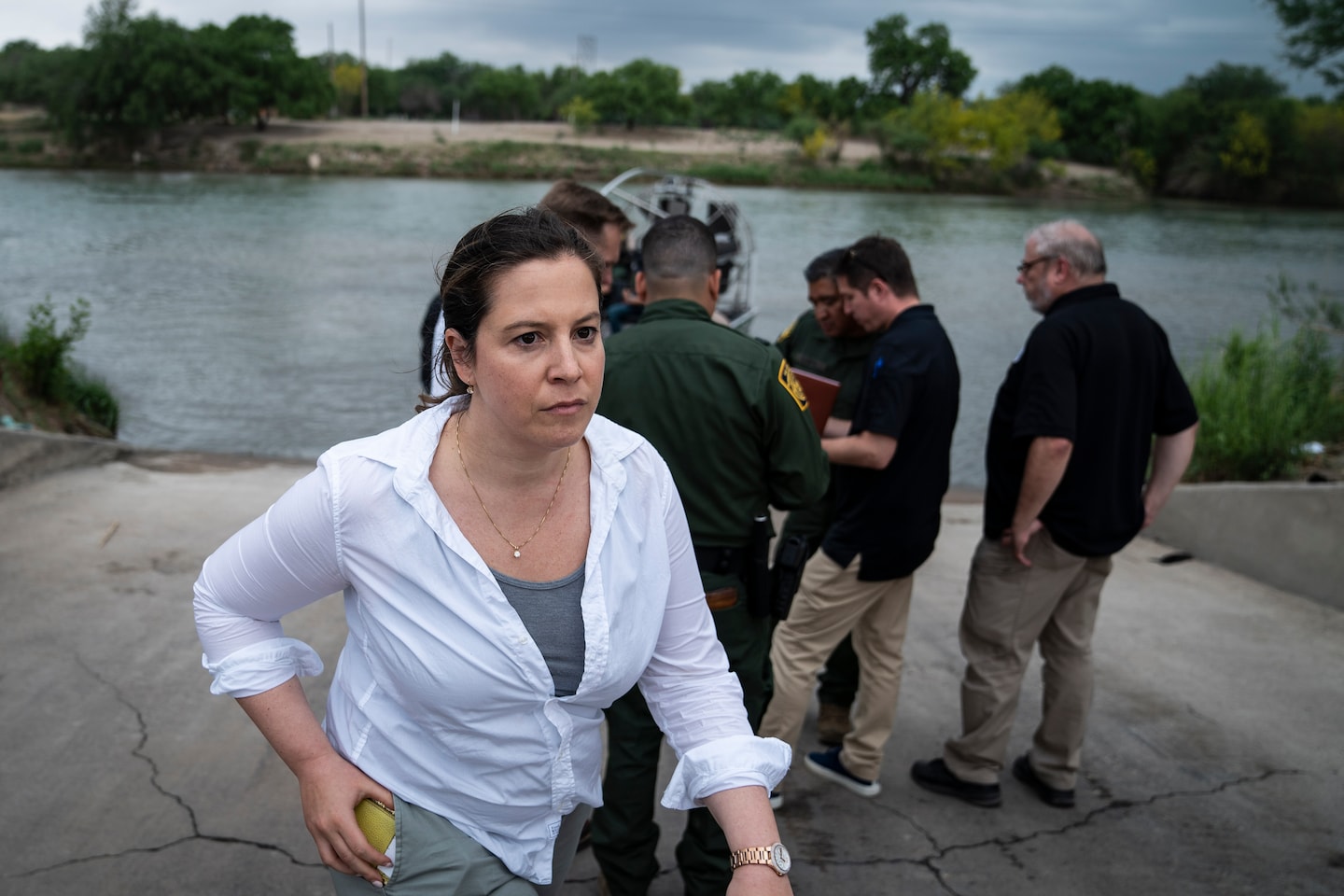 Rep. Elise Stefanik (R-N.Y.), the No. 3 House Republican, and other GOP lawmakers came under scrutiny Sunday for previously echoing the racist “great replacement” theory that apparently inspired an 18-year-old who allegedly killed 10 people while targeting Black people at a supermarket in Buffalo.

The baseless conspiracy theory claims that politicians are attempting to wipe out White Americans and their influence by replacing them with non-White immigrants. The theory was cited repeatedly by 18-year-old shooting suspect Payton Gendron in an online document that appeared to have outlined his intention to carry out his planned attack in Buffalo because of its significant population of Black people.

Eleven of the 13 people shot at a Tops Friendly Markets store on Saturday were Black, according to police.

While Stefanik has not pushed the theory by name, she and other conservatives have echoed the tenets of the far-right ideology as part of anti-immigrant rhetoric that has fired up the Republican base ahead of the midterm elections.

It marks a rapid transformation for Stefanik, who has sought to firmly align herself with former president Donald Trump and his nativist “Make America Great Again” agenda over the last year after she replaced Rep. Liz Cheney (R-Wyo.) as GOP conference chair. Cheney was pushed out for criticizing Trump’s role in spreading falsehoods about his election loss and for stoking the deadly Jan. 6, 2021, insurrection at the U.S. Capitol.

In response to the shooting Saturday, Stefanik tweeted that the U.S. “is heartbroken about the tragic news of horrific loss of life in Buffalo. We are mourning for the entire community & loved ones,” she wrote before thanking law enforcement for facing “skyrocketing violent crimes.”

Our nation is heartbroken about the tragic news of horrific loss of life in Buffalo.

We are mourning for the entire community & loved ones.

But Rep. Adam Kinzinger (R-Ill.), who is no stranger of denouncing pro-Trump colleagues, asked his followers in a tweet whether they knew “@EliseStefanik pushes white replacement theory?”

“@GOPLeader should be asked about this,” he said, referencing House Minority Leader Kevin McCarthy (R-Calif.). His office did not respond to a request for comment Sunday.

Kinzinger was referring to a series of Facebook ads published in September 2021 by Stefanik’s campaign committee that charged that Democrats were allowing undocumented immigrants into the United States as a ploy to outnumber, and eventually silence, Republican voters.

“Radical Democrats are planning their most aggressive move yet: a PERMANENT ELECTION INSURRECTION,” reads one of the ads, which shows a reflection of migrants in sunglasses Biden is wearing. “Their plan to grant amnesty to 11 MILLION illegal immigrants will overthrow our current electorate and create a permanent liberal majority in Washington.”

It’s a similar argument frequently espoused by Fox News host Tucker Carlson, leading the Anti-Defamation League to repeatedly call for his firing since April 2021 after he appeared to endorse the concept during one of his segments.

A Stefanik spokesman, who spoke on the condition of anonymity to speak candidly about her thinking, said the ads were pushed at the time when New York City was debating whether to allow roughly 1 million non-residents the chance to vote only in local elections. City council approved the measure in December, allowing those living in NYC for over 30 days with a work permit — not undocumented immigrants — to partake.

In a scathing editorial responding to the “despicable” ads, Stefanik’s hometown newspaper, the Times Union of Albany, wrote that the New York representative “isn’t so brazen as to use the slogans themselves; rather, she couches the hate in alarmist anti-immigrant rhetoric that’s become standard fare for the party of Donald Trump.”

“To equate opposition to illegal immigration with Nazism and white supremacy is a desperate attempt to stoke outrage & avoid covering Joe Biden’s border crisis,” she wrote in a Facebook post.

In a statement Sunday responding to the resurfaced posts in light of the Buffalo massacre, Stefanik’s senior adviser Alex deGrasse said, “Any implication or attempt to blame the heinous shooting in Buffalo on the Congresswoman is a new disgusting low for the Left, their Never Trump allies, and the sycophant stenographers in the media. The shooting was an act of evil and the criminal should be prosecuted to the fullest extent of the law.”

He added, “Despite sickening and false reporting, [the] Congresswoman has never advocated for any racist position or made a racist statement.”

Other Republicans in Congress have been pushing the theory in more explicit terms. Rep. Scott Perry (R-Pa.), the current chairman of the conservative House Freedom Caucus, said during a subcommittee hearing examining migration from Central America last year that many Americans believe “we’re replacing national-born American — native-born Americans — to permanently transform the political landscape of this very nation.”

After the ADL again called for Carlson’s firing in September, Rep. Matt Gaetz (R-Fla.) came to his defense, saying in a tweet the Fox News host “is CORRECT about Replacement Theory as he explains what is happening to America.”

An Associated Press-NORC Center for Public Affairs Research poll from December found that 1 in 3 U.S. adults believed there was “an effort to replace U.S. citizens with immigrants for electoral gains.” More Republicans believed in the likelihood than Democrats, 36 percent to 27 percent.

Rep. Brian Higgins (D-N.Y.), who represents the Buffalo area, called on leaders to denounce the theory and recognize the dangers that come with its rhetoric.

“The Great Replacement theory is racist nonsense that cynical politicians have used to foment division in America. What truly needs to be replaced in this country is ignorance and hate, which is driving division, perpetuating lies, and killing our neighbors,” he said in a statement Sunday. “The amplification of racism in all of its forms is sick and un-American and everyone – especially those who call themselves leaders – must speak out against it.”

McCarthy and other Republican leaders have been largely silent on the replacement rhetoric embraced by some of their colleagues, hoping to keep their focus on the economy and other issues that they feel will help them take back the House and Senate in November.

Last year, Republicans sought to oust Cheney from leadership for her repeated criticism of Trump after the Jan. 6 insurrection, saying they considered the issue a distraction and said Cheney should have been focused on keeping the GOP conference united ahead of the midterms.

Stefanik was considered a front-runner to replace Cheney but faced significant pushback from colleagues who questioned whether she could represent the pro-Trump conference given her background as more of a pro-business, anti-tax Republican cut from the same cloth as mentor Paul D. Ryan (R-Wis.), the former House speaker.

Her record on immigration was also questioned ahead of her ascension into leadership. A number of anti-immigration groups criticized her March 2021 vote for the Farm Workforce Authorization Act, for example, which would give legal status to undocumented farmworkers in the United States.

From Paul Ryan acolyte to Trump disciple: Stefanik sets out to replace Cheney in GOP leadership

Stefanik has since followed the trends of her party and district, which was once a Democratic stronghold but flipped for Trump by double-digit margins in 2016 and 2020.

She quickly gained Trump’s backing after she defended him during his impeachment trial and has since peddled his falsehood that the 2020 election was stolen.

Just last week, Stefanik appears to have amplified prominent QAnon conspiracy language fixated on pedophiles when alleging that the Biden administration does not have a plan to address a current baby formula shortage, referring to Democrats as “pedo grifters.”

A spokesperson later clarified that the term referred to the anti-Trump political action committee the Lincoln Project, specifically allegations that a former co-founder was sending unwarranted sexual messages to young men.

She and several congresswomen, including Rep. Marjorie Taylor Greene (R-Ga.) also spent the past week spreading falsehoods that the Biden administration was prioritizing sending baby formula to migrant babies at the border rather than feeding American-born children.

“Your plan #EliseStarvefanik is to starve babies. You have no excuse so now you’re just lashing out,” Rep. Ruben Gallego (D-Ariz.) said in response to Stefanik’s “grifters” tweet. “Picking on babies for political gain is so low and trashy.”