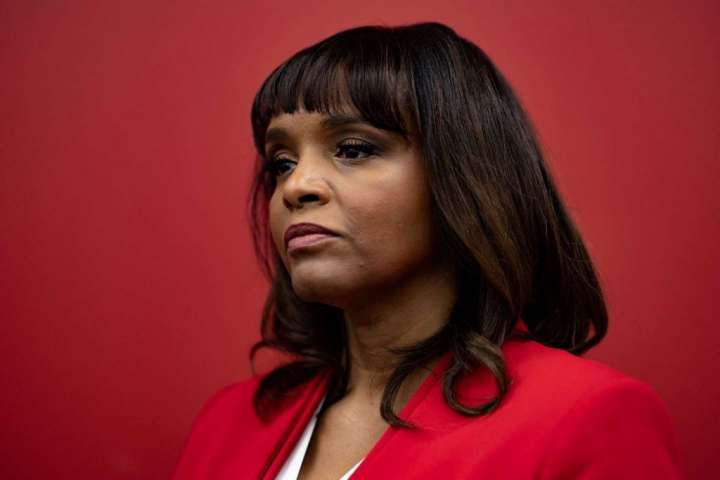 Former president Donald Trump on Monday tried to push his preferred candidate across the finish line in the high-stakes Republican primary for U.S. Senate in Pennsylvania, while a surging rival declined to endorse her main opponents if she does not win the nomination.

The developments underscored the chaotic finish to the primaries in one of the most closely watched Senate races in the country. On the Democratic side, the campaign of the leading contender, Lt. Gov. John Fetterman, said Monday he will not attend a primary-night rally Tuesday after suffering a stroke last week. Fetterman will remain hospitalized, according to his campaign.

Trump, who supports celebrity-turned-politician Mehmet Oz in the Republican primary, on Monday criticized insurgent candidate Kathy Barnette, alleging that she has not been fully scrutinized.

“People don’t know her,” Trump said of Barnette in an interview with The Washington Post. “She hasn’t been properly vetted. She ran for Congress fairly recently, and she lost by about 20 points.” Barnette, who has aligned herself with many of Trump’s ideas despite not having his support, participated in the “Stop the Steal” rally in Washington on Jan. 6, 2021, the day the U.S. Capitol was attacked by a pro-Trump mob.

Barnette did not immediately respond to a request for comment on Trump’s remarks.

The former president reiterated that he was behind Oz “all the way.” He said that he had a personal relationship with Oz and argued that he would give Republicans the best chance of holding the seat in November. “I also think Oz will do best in the general election,” Trump said.

Trump also recorded a robocall in support of Oz that disparaged Barnette and another rival, businessman David McCormick. He called the latter “an insider who absolutely sold us out to China” and hit Barnette over a proposal she made during her losing 2020 campaign for a U.S. House seat to erect a statue of the Obama family in Washington. “That’s no good,” the former president said in the call. “These are not candidates who put America First.”

McCormick’s campaign did not immediately respond to a request for comment on Trump’s attack. His campaign previously responded to a similar Trump attack by saying, “Dave’s battle-tested experience will make him one of the strongest Senators in Washington in holding China accountable and restoring pro-growth, America First policies.” Before running for Senate, McCormick led a hedge fund with significant investments in China.

Polls have shown a competitive Republican race, with support for Barnette on the rise. Adding to the tensions in the race, Barnette said Monday she would not support McCormick or Oz in the general election. “I have no intentions of supporting globalists,” Barnette told Breitbart News on Monday. “I believe we have ran out of room on this runway for this spaceship.”

Voters are heading to the polls in five states Tuesday to pick nominees for the November midterm elections. The vote will serve as the latest test of Trump’s influence over his party.

The Senate race in Pennsylvania is one of several expected to factor into which party controls the upper chamber of Congress next year. The retirement of Sen. Patrick J. Toomey (R-Pa.) triggered the open race.

Fetterman, who polls have shown is far ahead in the Democratic race, said Sunday that he suffered a stroke late last week and was recovering.

“I hadn’t been feeling well, but was so focused on the campaign that I ignored the signs and just kept going. On Friday it finally caught up with me,” Fetterman said in a statement. “I had a stroke that was caused by a clot from my heart being in an A-fib rhythm for too long.”

Doctors at Penn Medicine Lancaster General Hospital were able to “quickly and completely remove the clot,” he added in his statement. He said his doctors told him he “didn’t suffer any cognitive damage.”

The uncertainty surrounding the specifics of his return to the campaign trail loomed over the race in the final hours before voters were set to cast ballots. Rep. Conor Lamb and state Rep. Malcolm Kenyatta, two Democrats running against Fetterman, wished him a quick recovery.

Meanwhile, Trump’s clout with Republicans was also being tested in other states.

In North Carolina, he defended Rep. Madison Cawthorn on Monday even as members of his party have denounced the GOP freshman as a fame-seeking fabulist.

“Recently, he made some foolish mistakes, which I don’t believe he’ll make again,” Trump wrote on Truth Social, the media site he launched this year but has rarely contributed to. “Let’s give Madison a second chance!”

Some local Democrats have urged their voters to pull a Republican ballot to beat Cawthorn, and polling for state Sen. Chuck Edwards has shown him with a chance of forcing the congressman into a runoff. To avoid that, Cawthorn needs to win more than 30 percent of the vote.

Also in North Carolina, Trump has endorsed Rep. Ted Budd in the GOP primary to replace Sen. Richard Burr, a Republican who is retiring. Polling in the race’s final weeks found Budd building a lead over former governor Pat McCrory.

In Idaho, while Trump had endorsed Lt. Gov. Janice McGeachin’s challenge to Gov. Brad Little (R), he had not campaigned there, and McGeachin had raised little money to fund a far-right campaign that called for a complete ban on abortion — and included a recorded video for attendees of a white-nationalist conference.

Idaho conservatives were more hopeful about their chances of unseating a different Republican, Rep. Mike Simpson, who is on the ballot for the first time since voting against GOP challenges to the 2020 election and since supporting last year’s bipartisan infrastructure bill. One challenger, Bryan Smith, has loaned his campaign nearly $330,000 to fund ads ripping into Simpson.

Many of Tuesday’s most expensive races have unfolded in safe Democratic districts, where the party’s left wing is trying to expand its influence and where well-funded centrist PACs have poured in resources to stop them.

In Kentucky’s 3rd Congressional District, which covers Louisville, retiring House Democrat John Yarmuth has endorsed state Senate Minority Leader Morgan McGarvey (D) to succeed him. McGarvey entered the race after state Rep. Attica Scott (D), who would be the commonwealth’s first Black member of Congress, had set up a campaign.

Both candidates supported liberal priorities such as Medicare-for-all and legal marijuana, but McGarvey had raised far more money than Scott, spending more than $1 million while she spent less than $200,000. And McGarvey benefited from the support of Protect Our Future, a new PAC largely funded by 30-year-old cryptocurrency billionaire Sam Bankman-Fried — though McGarvey said he initially knew little about the group.

Protect Our Future spent heavily in other Tuesday primaries, making its biggest splash in Oregon, where it spent at least $11 million to support pandemic preparedness researcher Carrick Flynn over a crowded Democratic field in the new 6th Congressional District, outside Portland. A number of liberal groups have gotten behind state Rep. Andrea Salinas, along with the Congressional Hispanic Caucus, which has attacked the PAC for trying to keep Oregon from electing its first Latino member of Congress.

Outside money has also shaped the primary in the state’s new 5th Congressional District, which stretches from Salem to Bend. Rep. Kurt Schrader (D-Ore.), a leader of the conservative Blue Dog Democrats, is facing Jamie McLeod-Skinner, a liberal attorney and emergency-response expert.

Four of the district’s five county Democratic parties have endorsed McLeod-Skinner, who calls the incumbent the “Joe Manchin of Oregon,” based on his support from pharmaceutical companies and his vote to remove a prescription drug plan from last year’s House-passed social spending bill.

“People are really angry with his votes, and the fact that he won’t just own up to it,” McLeod-Skinner said in an interview last month, shortly before ballots were sent out in the all-mail election.

The party’s left is facing another test in Pennsylvania, where the American Israel Public Affairs Committee and its PAC have spent heavily to help attorney Steve Irwin in a close race with state Rep. Summer Lee. The Pittsburgh-based 12th Congressional District was drawn to elect a Democrat, and Irwin, a moderate who has occasionally donated to Republicans, is endorsed by Rep. Mike Doyle (D), who is retiring.

Lee, a democratic socialist who would be the first Black woman to represent Pennsylvania in Congress, has run as a potential ally of Sen. Bernie Sanders (I-Vt.). The ad campaign against her has portrayed her as a disloyal Democrat who would not get anything done in Washington, an argument Sanders flew to Pittsburgh last week to refute.

AIPAC is backing Davis in that race and gotten behind state Sen. Valerie Foushee in the 4th District.

Annie Linskey in Charlotte contributed to this report.