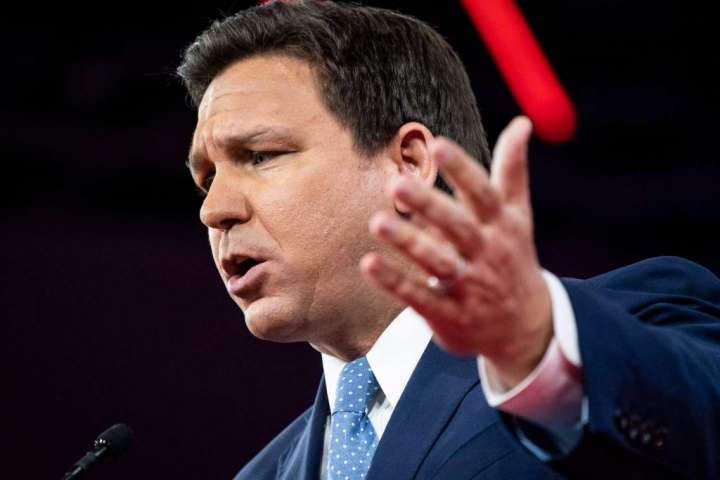 This one was teed up for Florida Gov. Ron DeSantis.

Back in March, long before the conservative furor over protests at Supreme Court justices’ homes, Florida’s legislature passed a ban on protesting at residential homes with the “intent to harass or disturb.”

DeSantis (R) signed the bill Monday, drawing support from conservative critics of the Supreme Court protests and derision from some on the left who argued the move violated First Amendment rights.

And you could forgive the latter group for jumping on that narrative, since another bill DeSantis signed last year cracking down on protests that turn violent — after a summer of racial justice demonstrations — was halted by a judge who indeed said it violated the First Amendment. DeSantis also pushed to remove Disney’s special tax status after it opposed him on a bill limiting discussion of sexual orientation and gender identity in schools. Those actions by DeSantis clearly raise important and valid questions about his stance toward free speech and the politicization thereof.

But in this newest instance at least, DeSantis appears to be on the side of most Democrats in Florida’s state Senate — and of established law.

The bill passed the state Senate in March by a resounding 28-to-3 margin, earning the votes of 10 Democrats. (The earlier vote in the state House was more partisan.)

Florida is hardly alone. While most states don’t have such a law, some blue-leaning states do — including Arizona, Colorado, Illinois and Minnesota, according to legal analyst Eugene Volokh. And many municipalities have similar laws. That includes Montgomery County, Md., whose law was at issue when protesters showed up at a justice’s home this month. That law bars stationary protests at a home but allows one to march in residential areas.

Much like that law, Florida’s appears carefully tailored to meet established requirements. The text of the law itself cites perhaps the most significant precedent, 1988′s Frisby v. Schultz, while applying a similar standard and even narrowing its scope.

The text of Florida’s law states:

“It is unlawful for a person to picket or protest before or about the dwelling of any person with the intent to harass or disturb that person in his or her dwelling.”

The first part aligns with the standard set in Frisby. In that case, the Supreme Court ruled that it is constitutional to ban protests at residences as long as the ban is content-neutral — i.e. it applies to all types of protests and not specific causes. The court also stated that a ban must allow people to still demonstrate in those neighborhoods, including by marching on residential streets in ways that don’t target a specific home.

Florida’s ban is actually somewhat narrower than the one in that case. The local law in Brookfield, Wis., forbade “any person to engage in picketing before or about the residence or dwelling of any individual.” Florida’s law contains the same “before or about” language — deliberately — but it also requires that such protests be intended “to harass or disturb” to be illegal. The law is also more reserved in that it requires a law enforcement officer to warn protesters to peaceably disperse before making any arrests.

Just because a law is constitutional and exists elsewhere, of course, doesn’t mean that it can’t be objected to; indeed, complying with the Constitution is a pretty low bar.

But in addition to echoing existing laws, this particular law doesn’t go nearly as far as the “anti-riot” law DeSantis made his focal point early last year. The law he signed made “willfully participating in a violent public disturbance” a crime. (It also granted civil immunity to drivers who hit protesters with their vehicles, if they said the protests made them fear for their well-being at the time.) Civil rights and free-speech groups objected, saying that it would chill participation in protests because protesters could be held liable for violence they didn’t perpetrate. A judge ruled that the law’s vagueness “consumes vast swaths of core First Amendment speech.”

DeSantis’s move to strip Disney of its special tax status rubbed even some conservatives the wrong way. Despite DeSantis’s assurance that he wasn’t retaliating against Disney for speech he didn’t like, the timing very much pointed in that direction.

If there’s a narrative building here, it’s that DeSantis isn’t exactly erring on the side of free speech — and is even targeting speech by people he doesn’t like, in rather novel ways. DeSantis is very much in line with Republicans embracing the usefulness of big government in cracking down on Big Tech, critical race theory and businesses that enact their own coronavirus restrictions.

It’s just that the law he signed Monday on residential protests is far from the best evidence of that. But in his long-running and successful quest to build his political career on owning the libs, it’s certainly useful.