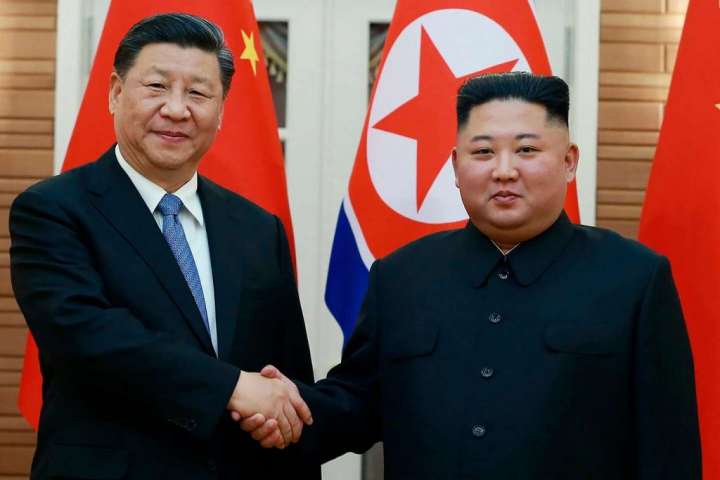 SEOUL — In December 2017, the U.N. Security Council agreed that the next time North Korea tested a ballistic missile capable of reaching the United States, it would slam down new fuel sanctions to pressure its leader, Kim Jong Un.

In March, when North Korea finally tested just such a missile capable of reaching Washington, the Security Council did not carry out its threat, largely because of objections from two countries: China and Russia.

As President Biden makes his first presidential trip to South Korea and Japan in the next week, he faces shifting dynamics in Northeast Asia that pose steep challenges to U.S. efforts to shore up alliances to counter China’s rise. A key challenge is North Korea’s thawing relationships with China and Russia, aimed at reducing U.S. influence in the region.

In particular, China’s strategic overture to North Korea since the collapse of U.S.-North Korea diplomatic talks in 2019 has drawn the two countries closer. With tensions rising over the U.S.-China competition and a new South Korean conservative government that vows to take a harder line on North Korea and China, Beijing has more incentive to keep Pyongyang close, experts say.

The United States wants to strengthen relationships with South Korea and Japan to tackle urgent regional issues, including North Korea’s nuclear ambitions, China’s supply chain dominance and the possibility of a conflict in Taiwan. But it won’t be an easy task, especially with souring Japan-South Korea relations and South Korea’s economic dependence on China.

“The overall security and economic situation, the landscape, doesn’t look very bright,” said Ahn Ho-young, former South Korean ambassador to the United States. “Because of all these challenges, this visit that President Biden is planning, is even more important.”

North Korea has long had a rocky relationship with China. But in recent years, Beijing has boosted its diplomacy with Pyongyang and grown to account for more than 90 percent of its external trade activity. While that trade sharply dropped during North Korea’s covid lockdown, Beijing remains its main lifeline.

The two countries have become more cooperative in recent years out of political convenience in the face of the U.S.-China competition, said Andrei Lankov, professor of Korean Studies at Kookmin University and a leading scholar on North Korean issues.

“The major game changer is the confrontation with the United States. … It means that the strategic value of North Korea from the Chinese point of view has increased dramatically,” Lankov said. “For North Korea, the Sino-U.S. rivalry is a kind of gift sent by the heavens. It gives them essentially unconditional Chinese support — something in the past they couldn’t even dream about.”

North Korea and Russia have also had a complicated relationship, but Pyongyang has become a vocal supporter of Moscow in the wake of the war, even becoming one of five countries that declined to condemn Russia’s invasion of Ukraine. Russian companies have continued to employ North Korean laborers, despite U.N. sanctions banning countries from hosting workers who earn foreign currency for the Kim regime.

Notably, China and Russia have shielded North Korea from further international sanctions despite Kim’s ambitious pursuit of his nuclear program, consistently advocating a rollback of sanctions.

“China, Russia and North Korea will continue to cooperate to safeguard regional peace and stability no matter what pressures and impacts may come from the U.S.,” China’s state-run Global Times wrote in 2021.

Most recently, when the United States last week pushed for new U.N. sanctions on North Korea over its missile and nuclear programs, China and Russia vetoed the move.

China’s ambassador to the U.N., Zhang Jun, blamed the United States for being “enamored superstitiously of the magic power of sanctions” and urged Washington to take a more active role in resuming talks with Pyongyang. Russia’s deputy U.N. ambassador, Anna Evstigneeva, said, “it is absolutely unrealistic” to expect North Korea to disarm under the threat of sanctions.

“Russia would like to see Americans to be distracted by some kind of development elsewhere. So they don’t mind, for the time being, North Korea’s nuclear adventurism — even though in the long run, Russia is not very happy about a nuclear North Korea, like China,” Lankov said.

North Korea’s Kim is determined to show he is on track with his five-year weapons-development schedule and has conducted an unprecedented number of missile tests this year. He appears to be preparing for an imminent seventh nuclear test, U.S. and South Korean officials say.

But China and Russia probably will not support additional sanctions on Kim even if he conducts a nuclear test, given China’s “dual track” approach to engaging North Korea despite its nuclear ambitions, and Russia’s opposition to international sanctions in the wake of the war in Ukraine.

The muddled response from the international community as a result of China and Russia has emboldened North Korea to develop an array of nuclear-capable weapons with impunity, including weapons targeting South Korea, said Ahn, the former South Korean ambassador. Ahn noted that North Korea’s leader Kim last month threatened nuclear retaliation if provoked.

“We have to deal with objective developments: North Korean missile technology is progressing all the time, and then North Korea is in fact coming up with declared intention of using those, tactical nuclear weapons,” Ahn said. “I think this would be the time we should be substantiating what we mean by strong deterrence.”

The new South Korean president, Yoon Suk-yeol, has promised to work with the United States to cooperate on regional efforts to counter China, such as the Quad and Biden’s new economic proposal named the Indo-Pacific Economic Framework.

“It’s hard to be optimistic,” Chung said. “If North Korea conducts a nuclear test, and Russia and China decline to pursue additional U.N. sanctions, then what does South Korea do?”