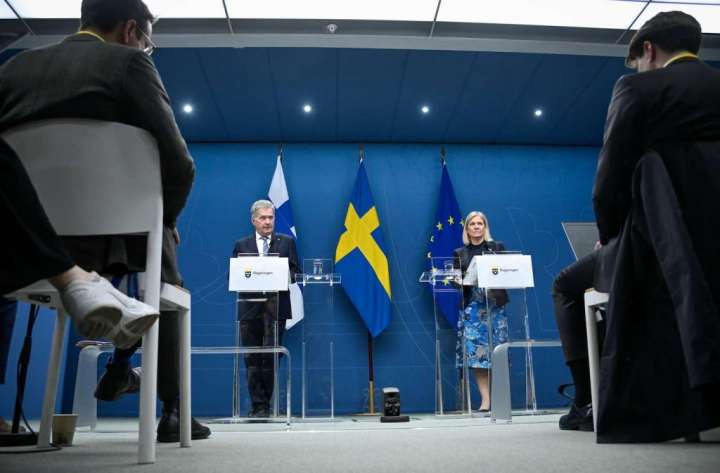 BRUSSELS — Finland and Sweden on Wednesday submitted letters formally expressing interest in joining NATO, a historic moment for two countries that held fast to military nonalignment until Russia’s invasion of Ukraine upended their thinking about security.

The delivery of the letters to the alliance’s Brussels headquarters marks the start of an accession process that could take months, but that is ultimately expected to result in an expansion of NATO from 30 to 32 members, remaking Europe’s post-Cold War security architecture along the way.

“We are leaving one era and beginning another,” Swedish Prime Minister Magdalena Andersson said Monday, announcing the decision.

How Putin’s brutal war in Ukraine pushed Finland toward NATO

Andersson and Finnish President Sauli Niinistö of Finland are scheduled to appear at the White House on Thursday, where President Biden is expected to show his support.

NATO Secretary General Jens Stoltenberg and several NATO countries have signaled that Finland and Sweden could expect protection in the period before their membership is fully ratified and they are part of NATO’s collective defense pact, known as “Article 5.”

A big question is whether Russian President Vladimir Putin will retaliate. European officials and diplomats officials said Finland and Sweden are prepared for hybrid or clandestine attacks.

Putin had cited the threat of NATO expansion among the justifications for his unprovoked invasion of Ukraine. Kyiv itself is not considered to be on track for NATO membership. But Putin’s war has resulted in a reinvigorated alliance that is now poised to double its land border with Russia.

The two new members would bring NATO’s full force to the far north and bolster its presence in the Baltic Sea region. The alliance would gain two sophisticated militaries with deep experience operating near Russia’s frontier. Sweden also holds the strategically important island of Gotland, just 200 miles from the Russian military in Kaliningrad.

Stoltenberg said Sunday that their accession would be a “turning point for security” in Europe. “Their membership in NATO would increase our shared security, demonstrate that NATO’s door is open, and that aggression does not pay,” he said.

Finland and Sweden didn’t consider themselves neutral before now. Militarily, they have been close NATO partners. Politically, they are members of the European Union.

But thinking of themselves as nonaligned militarily has been an important part of their self-conception. Before Russia’s invasion of Ukraine, a majority of people in both countries said it was safer to be outside of NATO. But the past months have seen a dramatic swing in public opinion.

Why Finland and Sweden weren’t part of NATO

“This is an extraordinary development given where we were in February,” said Anna Wieslander, director for Northern Europe at the Atlantic Council.

“Russia wanted to turn back time, to go back to the Cold War, to fragment and weaken the West,” she continued. “Now, in May, we are here.”

After receiving the applications, NATO will convene its decision-making body, the North Atlantic Council, to decide whether to move forward with the request. From there, there will be accession talks, according to a NATO official who spoke on condition of anonymity per the alliance’s ground rules.

This first phase of the accession process is expected to be swift, largely because both countries are already close NATO partners. From there it could take “months” for each member state to ratify the decision, the official said.

Russian officials have warned of “consequences” at every step, but in recent days have offered more muted rhetoric.

“Russia has no problems with Finland and Sweden, and in this sense, expansion at the expense of these countries does not create an immediate threat for us,” Putin said in televised remarks on Monday. “But the expansion of military infrastructure into this territory will certainly provoke our response.”

In a weekend telephone call, Putin told Finnish President Sauli Niinisto that the decision to join NATO was “wrong” and could have “a negative effect” on Russian-Finnish ties, but he did not make specific threats, according readouts.

NATO and European officials have for the most part downplayed the risk of significant Russian aggression.

The country’s military remains tied up in heavy fighting in Ukraine and has lost both soldiers and equipment. Russia also withdrew troops from the border with Finland, leaving Moscow with a reduced capacity to target the border militarily.

Given widespread support for NATO accession in Finland and Sweden, it will be difficult for Russia to try to influence those publics.

“There is no place to intervene, there is no ground to make people change their minds,” said Henri Vanhanen, a foreign policy expert and adviser to the center-right National Coalition Party. “This is the democratic resilience we have against Russia.”

“It is out of Russia’s reach right now to try to stop Finland and Sweden from joining NATO,” he continued. “It has to come to terms with it.”

If Putin does try anything, allies have pledged support. Britain, Denmark, France, Iceland and Norway are among those who have promised military support should either Finland or Sweden come under attack. Whoever would seek to test European solidarity by threatening or attacking their sovereignty, through whatever means, must be certain that France will stand shoulder to shoulder with Finland and Sweden,” read the French statement.