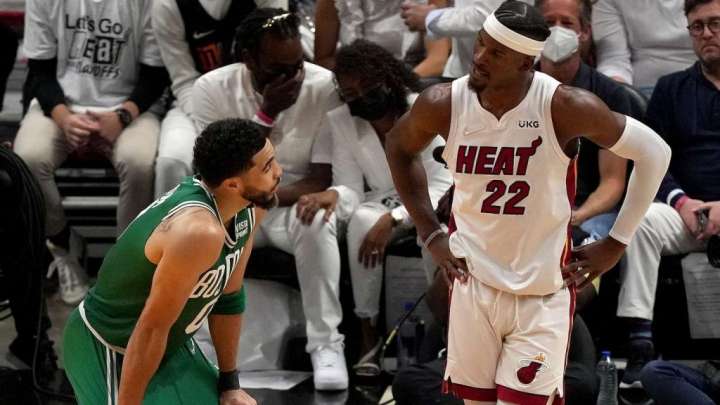 An appreciation of Miami Heat superstar Jimmy Butler can start with the way he showed up to the backroom dais in FTX Arena following Game 1 of the Eastern Conference finals. It was the solo command performance that followed his buffet style of basketball — all the scoring, defense and playmaking you can eat. And, possibly for popularity reasons, this moment was just as important as the game, because an audacious outfit in front of the cameras or a saucy quote served up to reporters would only brighten a star’s glow over the next day’s news cycle.

And in walked Butler, clothed in a hoodie. His mood: hovering somewhere around a solid four. His most earnest sound bite: something about planning not to shoot a three-pointer in Game 2 on Thursday night. Real sexy stuff.

He shrugged when a reporter began a question by ticking off his numbers in the Heat’s opening win over the Boston Celtics: 41 points, nine rebounds, five assists, four steals and three blocks. (It only happened to be the first time a player had registered those numbers in the playoffs since the league began counting steals and blocks.) He then provided his monotone response, sounding more like a doctor delivering a glum diagnosis than a dude who had just made history.

Stephen Curry has the splash in San Francisco, and Luka Doncic has won the heart of every NBA fan rushing to praise him as The Next. Also, 24-year-old Jayson Tatum has attained OG status among the ascendant faces of the game such as Doncic, Trae Young and Ja Morant. But of the superstars remaining in the NBA playoffs, we keep forgetting to pay attention to the one in Miami.

It’s weird to think that a player can be overlooked even though he was described as the “anchor and face” of the franchise by team president Pat Riley after he agreed to a four-year, $184 million extension last summer. And how many underappreciated players get their own Michelob ad campaign that highlight their quirkiness and affinity for Hootie & the Blowfish songs? Butler, however, may be the exception.

He doesn’t shoot threes, making him an outlier in today’s NBA. Since arriving in Miami, Butler, 32, has scaled back his game from the perimeter. Contrast that with the version of “Jimmy Buckets” circa the 2018-19 Philadelphia 76ers. During his one-season cameo with the Sixers, the team battled the eventual champion Toronto Raptors through seven games in the second round and Butler hoisted 34 attempts. This season, however, Butler averaged around a pair of three-point attempts per game. That’s the same number he took Tuesday night against Boston, which for his liking was two too many.

Butler’s game doesn’t defy gravity nor delight with acrobatics. Instead, the way he describes it, his preferred method of competition sounds closer to roller derby.

“I like physicality,” Butler said. “I want to run into people and see who falls down first, who is going to quit first. I think that’s the style of basketball I like to play.”

Also, his endorsement of Heat basketball won’t exactly help with the team’s engagement on the ’gram: “That’s the style of basketball we call Miami Heat basketball,” he said. “Gritty, dog-like, worried about getting stops instead of worried about getting buckets.” It’s no coincidence the Heat was the only squad among the last eight remaining playoff teams without a player who earned a single vote for MVP honors. “Dog-like” wins games but not votes.

Yet somehow, this throwback style of play — where stops and steals count as highlights — works for Butler and his team.

Far removed from the bluster of Miami’s Big Three, Butler’s version of the Heat and its rock ’em, sock ’em style of play have already made a Finals appearance during his first season in 2019-20. And since we’re here, let’s stop putting an asterisk on the “bubble playoffs.” The defining image of Butler, hunched over a courtside barrier while fake crowd noise pumped through the arena, displayed the uniqueness of the experience that the Heat and Los Angeles Lakers went through, and yet it still registered as a completely exhausting one.

Two years later, while other stars attract the marquees, all Butler has done is guide the top-seeded Heat through the playoffs. He’s doing so without a healthy Kyle Lowry, a former champion, while playing alongside teammates who might have a hard time getting recognized in South Beach (Gabe Vincent and Max Strus).

He’s not alone in uplifting his team to unpredictable heights. Stars are supposed to do just that. As the only lottery-pick talent in the Dallas Mavericks’ rotation, Doncic has carried his team to the Western Conference finals. And Tatum is likely to go for 40 in this series soon — you can always count on a man with an impeccable hairline like his — because he’ll have to shoulder more of a load without teammates Marcus Smart (foot injury) and Al Horford (health and safety protocols), who both missed Game 1.

But before we anoint the next superstars, can we appreciate what Butler is doing now?

“This level is high level, this competition, and he senses it, and he knows it,” Heat Coach Erik Spoelstra said. “He feels it. And he was able to produce and put us in a position to feel comfortable to be able to win this game.”

As teammates Bam Adebayo and Tyler Herro finished their postgame interview with reporters Tuesday night, Butler waited near the exit. Herro, with dark sunglasses, a cap plopped on his head and a sleeveless shirt, looked as though he took his cues from the NBA player fashion starter kit. Herro looked like a star. Then in walked Butler, who had played like one.