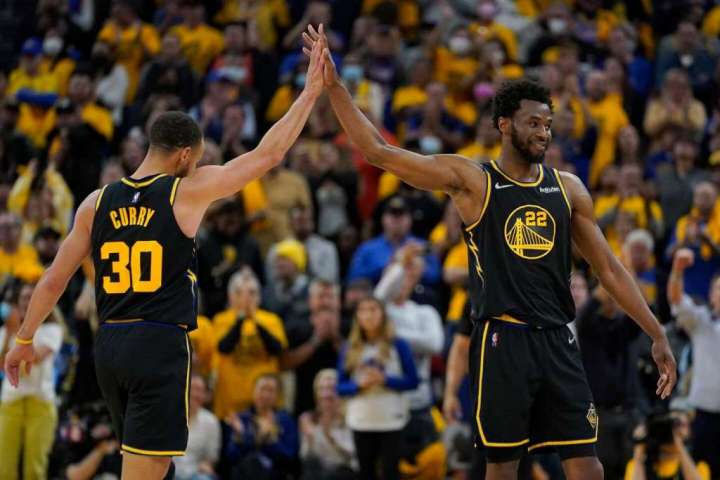 This is an excerpt from Ben Golliver’s NBA Post Up weekly newsletter. Sign up to get the latest news and commentary and the best high jinks from #NBATwitter and R/NBA delivered to your inbox every Monday.

SAN FRANCISCO — When the Golden State Warriors were ramping up for the season in October, they were still viewed as a collection of questions rather than surefire title contenders.

Klay Thompson was rehabbing a torn Achilles’. Draymond Green was three years removed from his most recent all-star selection. And Stephen Curry had been outdueled by LeBron James and Ja Morant in the 2021 play-in tournament, causing the Warriors to miss the playoffs for the second straight year.

The biggest cause for uncertainty, though, was Andrew Wiggins, a starting small forward who would be critical to the Warriors’ playoff hopes. The No. 1 draft pick in 2014 had gradually acclimated to his new home following his February 2020 trade from the Minnesota Timberwolves. But Wiggins, like Kyrie Irving, held severe reservations about getting a coronavirus vaccine and would be ineligible to play full-time per San Francisco’s local mandate unless he got the shot. The decision dragged for weeks throughout training camp until Wiggins relented shortly before the preseason.

“The only options were to get vaccinated or not play in the NBA,” Wiggins said at the time, citing his desire to provide for his family. “It was a tough decision. Hopefully there’s a lot of people out there that are stronger than me and keep fighting, stand for what they believe.”

What to know about the 2022 NBA Finals: Warriors vs. Celtics

Had Wiggins held firm like Irving, who remained unvaccinated and was only able to fully participate once New York’s local mandate was lifted in March, the Warriors probably wouldn’t be in position to claim their fourth title since 2015.

As for Wiggins, whose hesitancy was grounded in fears of potential side effects and a desire for bodily autonomy, his eventual willingness to get the Johnson & Johnson shot set up what has turned out to be easily the most successful season of his career. In the past eight months, Wiggins has led Golden State in minutes played, been selected to his first All-Star Game thanks to an online voting push from K-pop star BamBam and emerged as the leading X-factor in the upcoming Finals against the Boston Celtics, which open Thursday at Chase Center.

Back when Wiggins, a Toronto native, was a high school prodigy, he reclassified so he could enter the NCAA ranks a year early and boasted the grandest of dreams, proclaiming in 2012 that he wanted to “score like Kevin Durant and get to the basket like LeBron James.” With a prototypical wing’s frame, an incredible first step and excellent leaping ability, Wiggins earned the “Maple Jordan” nickname, graced the cover of Sports Illustrated during his one-and-done season at Kansas, became a No. 1 draft pick and won 2015 rookie of the year honors with the Timberwolves.

He emerged as a reliable scorer, averaging around 20 points, but his efficiency left much to be desired, as did Minnesota’s young roster. In his five-plus seasons with the Timberwolves, Wiggins reached the playoffs just once and appeared in a single postseason win. His quiet nature and tendency to float in and out of the action turned off fans who yearned for a transformational talent as the Timberwolves missed the playoffs for 13 straight years before their 2018 breakthrough.

Along came the Warriors, who viewed Wiggins as a distressed asset who could help fill a void following Durant’s 2019 departure in free agency. Golden State sent guard D’Angelo Russell to Minnesota for Wiggins and a 2021 first-round pick, which became rookie Jonathan Kuminga.

“I think the Wiggins trade is the key to all of this,” Coach Steve Kerr said recently, noting that the Warriors’ group of wing defenders had been “wiped out” by the 2019 departures of Durant, Andre Iguodala and Shaun Livingston. “The Wiggins trade allowed us to start to rebuild that wing defense. Wiggs has just been so good. He’s a perfect fit next to our guys. I don’t know where we’d be without him.”

Wiggins averaged 17.2 points, 4.5 rebounds and 2.2 assists this season, settling into life as Golden State’s fourth-leading scorer and most important wing defender. His familiarity with Kerr’s motion offense improved during his second season with the Warriors, and he displayed a willingness to scale back his scoring upon Thompson’s January return from injury.

That unselfishness — along with his diligent on-ball defense and no-complaints mentality — has won him rave reviews from his coach, teammates and opponents during this postseason run. His multipronged value was most evident in the Western Conference finals against the Dallas Mavericks, when he hounded all-NBA guard Luka Doncic with full-court pressure and still found a way to score consistently.

“Wiggs is understanding the nuances of winning basketball and how to key in on the little things,” Curry said. “Consistent effort on defense, taking those one-on-one challenges, being aggressive on the offensive end, using his athletic ability to get to the rim if he needs to, confidence shooting the three. It’s not like he’s out there scoring 30 every night. It’s the other things that help you win.”

Thanks to the bounce that excited basketball scouts during his prep days, Wiggins’s knack for offensive rebounding was crucial against Dallas’s small front line. And his athleticism was on full display when he threw down a poster dunk on Doncic, who admitted that he wished he “had those bunnies.”

Doncic averaged 32 points, 9.2 rebounds and six assists in the West finals, but he left the series saying he “played terrible” in Game 5 and was “still learning a lot” against the more talented and cohesive Warriors. Wiggins’s 27 points and 11 rebounds in a Game 3 victory were pivotal, helping ensure Golden State would make quick work of Dallas and enjoy six days of rest before the Finals.

“I gave Andrew a big hug and told him how grateful I am for him,” Thompson said at the end of the West finals. “The job he did on Luka all series — Luka is one of the toughest guards in the NBA. I told him: ‘Wow, you make my job so much easier. I don’t have to chase these guys around like I once did.’ ”

After years of getting labeled as a draft disappointment — not a bust but also not a franchise player — Wiggins is suddenly in position to become the first player from the 2014 lottery to win a ring. To do so, he will be asked to play major minutes against Boston’s Jayson Tatum and Jaylen Brown, the most talented wing duo Golden State will face this postseason.

“The playoffs are different than the regular season,” Wiggins said. “It’s very detailed. The physicality — you’re able to get away with a little bit more stuff. I love it. [My teammates] are future Hall of Famers. They won on the biggest stage. They’re consistent with it. They know what it takes and how to do it. Being here, being around those guys, I have just learned a lot.”