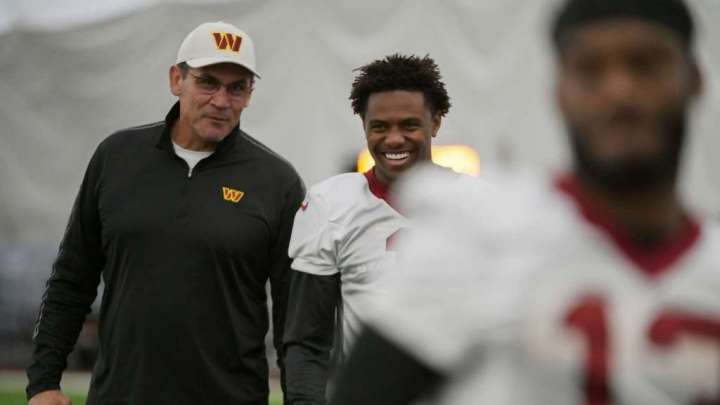 In February, on the shaded sideline of a field in Phoenix, Jahan Dotson may have heard something he didn’t like. A tour guide was showing a visitor around the campus of Exos, a high-end athletic performance center where many NFL prospects train for the combine.

“There’s Garrett Wilson,” the guide said, pointing at the Ohio State wideout stretching across the field. “He’s going to be the number one receiver in the draft.”

Nearby, a group of wide receivers groused. “Man, I’m not trying to hear that,” one grumbled. Another waved his hand, dismissing the comment. Dotson, if he heard, didn’t react — except to walk away and toward the next drill. Told this story later, trainer Nic Hill thought it was classic Dotson, whom he nicknamed “the silent assassin.”

In the 12 weeks Dotson was at Exos, Hill learned the calm, steady, dragonfly-fast wide receiver didn’t need to be praised or challenged or cajoled. During 40-yard dash practice — a big, raucous spectacle with thunderous beats and staccato shouting — Dotson was often subdued and at the back of the line. Hill noticed Dotson was at his best when he appeared withdrawn.

“You see him get focused and kind of glass over the eyes,” Hill said. “It’s like: ‘Okay, that’s what I want to see. That’s what I need to see.’ That calm confidence — you know he’s about to go off.”

In Dotson, 22, the Washington Commanders seem to have a mature, polished wideout who’s ready to produce. He was the 16th draft pick — and, as it turned out, the fifth wide receiver taken. While analysts have concerns about his size (5-foot-11, 182 pounds) and strength, they also gush about his hands (“Best in the draft,” said NFL Network’s Daniel Jeremiah) and catch radius (“Maybe the largest . . . of any sub-5-foot-11 receiver I have ever scouted,” wrote Dane Brugler of the Athletic).

In the Commanders’ offense, Dotson’s skill set figures to be valuable with a big-armed, imprecise quarterback in Carson Wentz. Offensive coordinator Scott Turner could move him around the formation with other versatile weapons such as Curtis Samuel, Terry McLaurin and Antonio Gibson.

“We have really big expectations for [Dotson],” General Manager Martin Mayhew said. “He’s going to fit right in to what we’re doing offensively.”

In a way, Dotson has been preparing for this his whole life. When he was 3 or 4, he said, he went to the park with his older cousins to play catch — and one of them forced him to do 10 push-ups for each drop.

“I got tired of that real quick,” Dotson deadpanned.

In the late 2000s, Dotson’s parents, Al and Robin, moved from East Orange, N.J., to the small town of Nazareth, Pa., to raise Jahan and his brother Al in a safer environment. They commuted to New Jersey every day for work — more than an hour each way — as Jahan became a standout athlete, including in track and basketball. But every day, from bed to school to field, he always seemed to be carrying a football.

Early in his senior year, Dotson committed to UCLA. But Josh Gattis, then the passing game coordinator at Penn State, said he heard Dotson might be interested in staying closer to home. Even though Dotson was “kind of frail,” Gattis said, he was a complete receiver. Not only was he an elite athlete — jumping, body control, ball skills — he was smart. He had a game plan to beat the defense and executed it with crisp routes. Dotson’s stats were gaudy, too.

“The buzz that he was creating through the eastern part of [Pennsylvania] was tremendous,” Gattis said.

That fall, Penn State finished 11-2 and won the Big Ten and the Fiesta Bowl behind running back Saquon Barkley, who once starred at a high school not far from Dotson’s in the Lehigh Valley. Those factors — the program’s renaissance and a local hero’s rise, as well as the departures of three top wideouts — made it easy for Dotson to flip his commitment to Penn State after UCLA fired coach Jim Mora.

In State College, Dotson ascended each season despite having three receivers coaches in four years. After his junior year, when he had 52 catches for 884 yards and eight touchdowns in nine games of the pandemic-shortened season, he could have left for the NFL. But he said he was too young, he wasn’t ready and it “wasn’t a very hard decision” to stay in school.

In 2021, Dotson worked with the same position coach in consecutive seasons for the first time in at least seven years. Taylor Stubblefield, that receivers coach, believed Dotson could make another leap because of his competitive streak. Once, while hosting a dinner at his house, Stubblefield saw it distilled as Dotson and Stubblefield’s son, Jagger, invented a game in which they threw balls at the family dog bed in the distance. (Jagger won two of three, Stubblefield said.)

Barry Svrluga: The options for a Commanders stadium site: Bad, worse and nonexistent

In the team facility, Dotson asked for hard coaching. In Dotson’s senior year, Stubblefield focused on his footwork, his ability to disguise routes and his versatility. The coach delved into the nuances of looking for clues to the defense’s plan through the “DED” of a defensive back — depth, eyes, demeanor — and reminded Dotson of what it meant to be a professional by repeating the expression, “Don’t leave your paycheck on the table.”

“If you have an opportunity to make a play, that’s your opportunity to get paid,” he said. “Whether it’s working to an area that the defense isn’t there or whether it’s that hard, dirty, grinding route where the [defensive back] plays it perfectly and you got to make a great play — no matter what the situation is, be able to get paid.”

By the end of the year, Dotson had compiled one of the best seasons in Penn State history with 91 catches for 1,182 yards and 12 touchdowns. The Nittany Lions also used him out of the backfield and on passing trick plays, where he completed both attempts for a total of 43 yards.

Before the draft, Dotson focused on honing his speed and adding strength. Hill, the Exos trainer, said the company’s analysis recommended he play at about 183 pounds. And when Dotson arrived at the Commanders’ facility for the first time in late April, he arrived holding a football.

In his few Washington news conferences so far, Dotson has seemed businesslike. He compared learning the playbook — familiar concepts with new verbiage — to English and Spanish, that it’ll just take a little time. But one of the few subjects to prompt a more emotional response is his family.

“Having my parents there by my side, that was big to me,” he said during his introductory news conference in front of Al and Robin. “Reflecting on my young childhood days, there was a lot of sacrifice that led to this moment and a lot of hard work — just thinking about all those times where things weren’t always so pretty. But at the end of the day, we made it happen, and we got to this moment.”

And now, Dotson said, he’s intent on making the most of it.