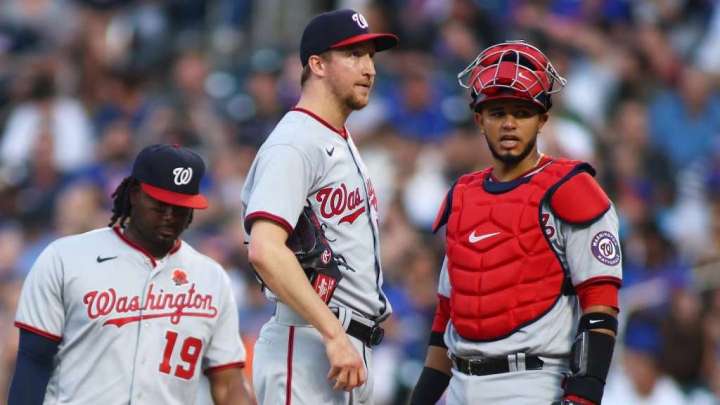 NEW YORK — Like clockwork, Erick Fedde, Andres Machado and Austin Voth each recorded four outs Monday night — no more, no less — and were crushed by the New York Mets at Citi Field. They were tagged with a combined 12 runs in four innings of the Washington Nationals’ 13-5 loss. The Mets’ top three hitters of Luis Guillorme, Starling Marte and Francisco Lindor were 8 for 9 with a homer, a walk and seven RBI against those three pitchers.

But Fedde’s outing, the worst of his season, posed a bigger problem than what Machado or Voth did behind him. At this point, struggles for the two relievers are more routine than concerning. Machado, having just returned from Class AAA Rochester, has battled command issues all season. Nick Plummer’s three-run homer in the fourth inning shot Voth’s ERA to 10.13 in 18⅔ innings. Fedde, though, had been the Nationals’ best starter and entered with a 1.95 ERA in May.

Of course, that memo didn’t reach the first-place Mets (33-17), who now have a 15-game lead on bottom-feeding Washington (18-32). Fedde’s burst of success came with a spike in cutter usage, mostly throwing the pitch near the top of the strike zone. Yet in a 32-pitch first inning, Guillorme and Lindor smacked cutters for singles. In between, Marte singled on a sinker to make it three in a row to begin Fedde’s night.

“It’s brutal. It lets the whole team down,” said Fedde, who blanked the front-running Los Angeles Dodgers for six innings in his previous start. “If you’re able to at least go six and give up a bunch of runs, you put the team in a better position going forward. But today was just really unacceptable in a sense, and I feel bad for the guys in the bullpen. I put them behind the eight ball probably for the next week or so.”

With ‘training wheels’ off, Josiah Gray adjusts to life in Nats’ rotation

Nothing worked aside from a cutter to Jeff McNeil that induced a double play. It took 29 pitches for Fedde to record an out. Two coming at once helped him wiggle out of the first inning with only a pair of runs on the board. Yet in the second, Mark Canha led off with a single, Plummer doubled, Tomás Nido flied out, Guillorme singled in Plummer, Marte lined a two-run homer, and Lindor singled, too. That was it for Fedde. He was handed a 3-0 lead that flipped to 6-3 before the sun set in Queens. To no avail, Josh Bell and César Hernández revved the offense with three hits each.

Fedde, 29, faced 12 batters, gave up eight hits and a walk and managed four outs, his fewest since a disaster against the San Diego Padres in July. Eight of the Mets’ 11 batted balls against him traveled 96.4 mph or faster. Statcast defines those as “hard-hit.” Among them was Marte’s homer, which reached the left field seats at 106.3. That’s colloquially known as “scorched.”

“When you’re feeling good and things are going the right way, to have an abrupt halt to that is tough,” Fedde said. “It’s hard for me not to think that I ruined my whole month in that sense.”

Last time out: Juan Soto looks more like himself in the Nats’ win over the Rockies

What does Fedde’s short start mean for the immediate rotation plans? The Nationals need a spot starter for Wednesday’s matchup with the Mets. Before Fedde exited in the second inning Monday, the club was hoping to consider Josh Rogers or Paolo Espino as options, should they not be used much in the first two games of this series.

But Espino was asked for three innings and 48 pitches of mop-up duty. Then Rogers entered for the eighth, logging just 13 pitches. (Pete Alonso greeted him with a solo homer.) In turn, the choice for Wednesday narrowed to Rogers for two or three innings or a starter from the minors. And the latter scenario probably pushes Jackson Tetreault to his major league debut.

Tetreault, 25, would be on regular rest and has a 3.35 ERA in 10 starts for Rochester. The righty is not on the 40-man roster, so the Nationals would have to add him in the spot they opened by designating starter Aaron Sanchez for assignment Saturday. Another possibility is 24-year-old lefty Evan Lee, who is on the 40-man because the Nationals wanted to protect him from being selected in the Rule 5 draft last year. But Lee has never pitched above Class AA and recently made a pit stop on the injured list. Tetreault is the leading candidate.

Why did Yadiel Hernandez pinch-hit for Nelson Cruz in the fifth? Cruz has a contusion above his left ankle after Mets starter David Peterson hit him in that spot in the first inning. Manager Dave Martinez told reporters that X-rays were negative and called Cruz “day-to-day.” Cruz, 41, recently dealt with a mild right ankle sprain following an awkward slide in Milwaukee.

What’s next for Stephen Strasburg’s rehab? Strasburg is in New York to throw his between-starts bullpen session in front of the Nationals’ coaches and athletic trainers. If that goes well, he is expected to make another rehab start Friday, this time pitching for Rochester and targeting six innings. Beyond that, Martinez wouldn’t commit to Strasburg making the jump from one outing in Rochester to his major league return. But if he did, the 33-year-old righty would be on schedule for a June 8 meeting with the Marlins in Miami.

No 19-31 for the Nationals? Nope, they fell one win shy of the most famous record in club history. Maybe next year.