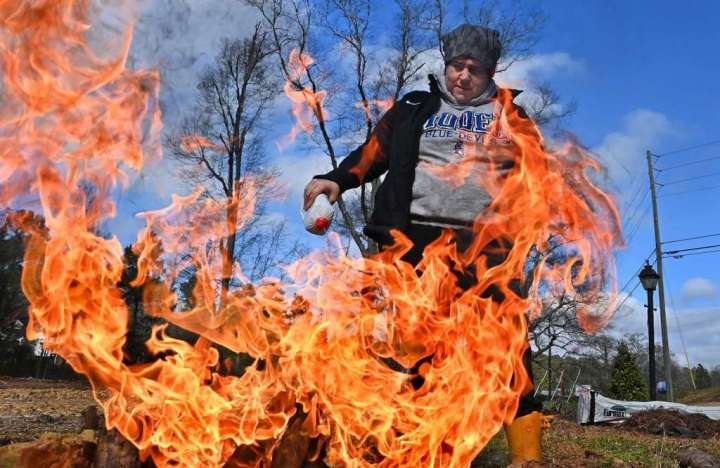 It’s always baseless, and often someone has already debunked either his exact claim or a version of it. But rarely is it as dubious as the latest iteration.

In an email from his political action committee Tuesday, Trump promoted an analysis that suggested former senator David Perdue’s loss in the Georgia governor’s primary, by 74 percent to 22 percent, somehow was the result of voter fraud.

Trump blasts out article that claims Kemp’s 50 point victory in the Georgia GOP gubernatorial primary was due to voter fraud. 400,000 Mules? pic.twitter.com/2udbJiGxgX

Among the claims made in the piece the former president sought to promote:

The author of the piece Trump cited, which was originally posted on Substack, declined to respond to questions about the substance of the claims.

Trump’s effort to blame his Georgia losses on fraud is merely the latest evidence of something that has become increasingly evident since 2020: that without a true rebuke from his party, Trump is just going to keep undermining democracy through more and more outlandish claims.

But it’s worth a look at just how that progression has taken place.

It seems like eons ago, but on Election Day 2012, with GOP presidential candidate Mitt Romney headed for predictable defeat, Trump baselessly tweeted about “reports of voting machines switching Romney votes to Obama.” Late that night, with Romney having lost, Trump called for people to rise up. “We can’t let this happen,” he tweeted at 11:29 p.m. “We should march on Washington and stop this travesty. Our nation is totally divided!”

By 2016, Trump was a candidate in his own right. And his baseless allegations of fraud began after the first votes were cast. After initially conceding his loss in the Iowa caucuses, Trump two days later falsely blamed it on fraud allegedly committed by Sen. Ted Cruz (R-Tex.). Trump later walked back the claim that Cruz had done something illegal.

Trump went on to win the 2016 general election, but even in victory he cried “fraud” — because he had lost the popular vote. Trump cited a social media conspiracy theory in claiming that 3 million to 5 million undocumented immigrants had illegally voted, and that somehow every one of them had voted for Hillary Clinton, with none for him. As we wrote back then:

Once you get past the lack of a factual basis for Trump’s strange and incredible claim, this is what really doesn’t make sense about it. Trump is alleging that as many as 3.6 percent of the votes cast in a 2016 contest decided by even fewer votes may have been illegitimate. He’s saying the number of illegal votes may have been larger than the populations of 38 states. He’s saying that as many as 30 to 40 percent of the estimated 11 million undocumented immigrants in the United States cast ballots.

(For some reason, despite this large degree of supposed fraud and its having been enough to change the outcome, Trump did not doubt the legitimacy of his win. He delayed calling for an investigation until after he was in office. The investigation turned up no evidence of widespread fraud.)

The 2020 election, of course, is what sparked Trump’s most infamous claims of voter fraud. That’s in large part because of how concerted his effort was and its consequences, including the Jan. 6, 2021, insurrection and a majority of Republicans coming to believe the general thrust of Trump’s claims.

By 2021, all eyes turned to the California recall, where Trump ally Larry Elder appeared to have a fighting chance against Gov. Gavin Newsom (D). Even before Election Day, Elder’s website blamed voter fraud for Newsom being “reinstated” as governor, and Trump claimed the election was being “totally rigged.” But when Elder lost by a huge margin — 62-38 percent — they largely backed off the claim.

An even larger margin in the Georgia governor’s was apparently not enough to exempt it from this treatment. And that treatment comes two weeks after Trump urged his preferred candidate, celebrity physician Mehmet Oz, to declare victory in a very tight race before many votes were even counted. Trump argued that doing so would somehow prevent the election from being stolen.

Oz did not heed that advice, but he did not publicly reject the argument from his benefactor. And that’s how the GOP has generally handled these things: They won’t completely echo Trump, but they’ll either treat him like he’s just some guy spouting off on the Internet or offer a watered-down version to make it sound as if they’re on the same page.

As an anonymous White House official infamously said a week after the 2020 election, “What is the downside for humoring him for this little bit of time?” The biggest downside was soon revealed to be the Jan. 6 insurrection. But the party hasn’t stopped humoring him. And apparently that means he’ll cry foul even after elections in which his side is defeated by more than 3 to 1.

Philip Bump contributed to this report.