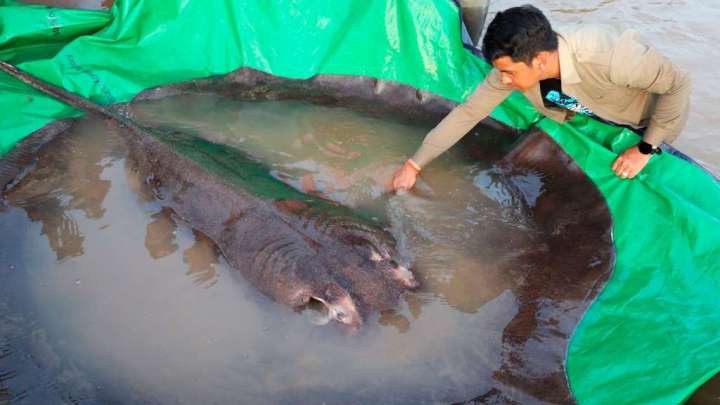 A giant 661-pound stingray was caught in a remote fishing village on the shores of the Mekong River in Cambodia, making it the heaviest freshwater fish ever documented, researchers said Monday.

The 13-foot fish dethrones the former record-holder, a 646-pound catfish found in northern Thailand in 2005. It also renews hope that large freshwater fish — which as a group of animals are critically threatened — can thrive once again.

A fisherman caught the giant stingray on the evening of June 13, said Chea Selia, a member of a joint American-Cambodian research team known as the Wonders of the Mekong that is documenting freshwater fish. The fisherman then contacted her team the following morning, Chea said. The stingray was weighed, then released.

Before the catch, locals had told the researchers that they were seeing large “black shadows underneath the water at night,” Chea said in a phone interview. “They thought they were spirits. I think they were the stingrays,” she said.

Nearly a third of all freshwater fish species are threatened with extinction, according to the World Wildlife Fund; since 1970, populations of freshwater fish weighing 66 pounds or more have declined by 94 percent. In 2020 alone, 16 species were declared extinct, including the Chinese paddlefish.

Feared extinct for nearly half a century, Batman River fish rediscovered in Turkey

“I was concerned we would see [more extinctions] before we would see records broken,” said Zeb Hogan, a 48-year-old biologist who has spent his two-decade career researching large freshwater fish. “The fact that this record-breaking fish was found is mainly significant because it shows that there is still hope for these fish,” he said.

Hogan had just finished writing a manuscript for his book entitled “In Search of the World’s Largest Fish.” In his draft, Hogan describes how in 2005, locals in Thailand had found the then-largest ever freshwater fish. But last week, Hogan had to update it, after hearing from the Wonders of Mekong team in Cambodia, which he directs with help from the U.S. government. (The Wonders of Mekong is funded by the U.S. Agency for International Development).

The 661-pound stingray is also the fourth large freshwater fish to be found in that area of the Mekong River since April 22, when Hogan’s team started asking local fishers to report any big fish they see. That suggests the area — near the fishing village of Koh Preah, 140 miles northeast of Cambodia’s capital, Phnom Penh — could be a breeding ground for freshwater stingrays that needs to be conserved. “I think we can call it a stingray hot spot,” Hogan said.

Cambodian fisheries officials are now planning an international workshop that will seek to involve experts from Vietnam, Laos and Thailand to discuss how to better protect the surviving freshwater fish in the area, Hogan said.

The Mekong, which at an estimated 2,700 miles is longer than the Mississippi, snakes down mainland Southeast Asia across the four countries, meaning conservation efforts must be coordinated. Cambodian officials could not be immediately reached for comment.

Hogan spoke by phone from a vacation in Hawaii with his family. When asked if his family was okay with him working during his holiday, Hogan shrugged it off.

“I’ve spent the last 20 years of my life focused on this topic,” said Hogan, who has hosted a show called “Monster Fish with Zeb Hogan” on Nat Geo Wild. “So I wouldn’t miss this for the world. And yeah, my family’s on board, too,” he said.