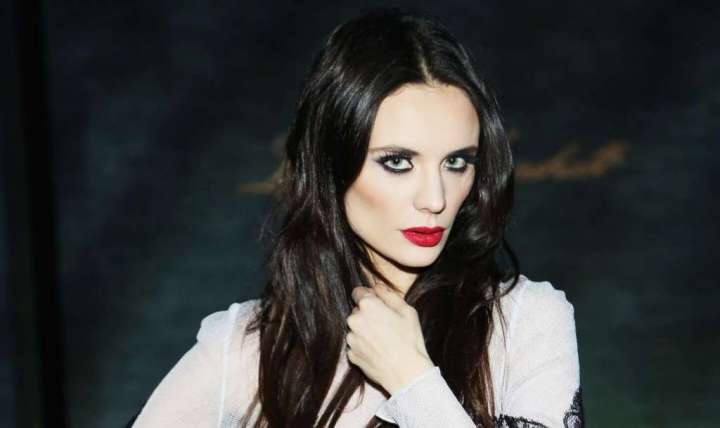 Leaving behind a decade-long modeling career in the United States, the dual U.S.-Russian national returned to her hometown of Moscow this spring to launch a new clothing line in sanctions-hit Russia while declaring her support for Russian President Vladimir Putin.

The concept of the company, which she says is still under development, is inexpensive replicas of Western brand apparel to fill the shelves of Zara, H&M and other retailers that shuttered their Russian locations in the aftermath of the Feb. 24 invasion.

“We change the design a little bit in order not to get sued by the companies,” Dikhtyar said in a phone interview from her home in Moscow.

The project provides a glimpse into the ragtag reorientation of the Russian economy under Western sanctions. One of the best-known examples is the recreation of McDonald’s without the Golden Arches and Big Macs, but otherwise offering what its new backer — a Siberian oil tycoon who bought all 840 stores — says will be largely indistinguishable fare under a new name — “Tasty and that’s it.”

With scant options in Ukraine, U.S. and allies prepare for long war

On Friday, at an economic forum in St. Petersburg, Putin said the adaptation of the Russian economy was succeeding. “Russian enterprises and government authorities worked in a composed and professional manner,” he said. “We’re normalizing the economic situation. We stabilized the financial markets, the banking system, the trade system.”

The effects of sanctions have for now also been blunted by soaring oil and gas revenue, allowing the Kremlin to continue to fund the war effort and stimulate the economy.

Dikhtyar sees herself at the vanguard of this economic reinvention and expresses no regret about pursuing business in wartime Russia. “What’s wrong with it?” she said. “It’s an amazing opportunity here in Moscow.”

In the United States, Dikhtyar is best-known for her stint on the reality TV show “The Face” and a subsequent tabloid feud with former supermodel Naomi Campbell. Over the last decade, she worked as a fashion model with her image featured in the pages of FHM and the foreign editions of L’Officiel and Playboy.

“People are so brainwashed by media — It’s insane,” she said, blaming the United States for prolonging a war in Ukraine that has brought the Kremlin international condemnation.

“There is no more peace and this is the fault of the United States of America,” she said. “If they would not support the military in Ukraine, they would achieve peace … but since they brought military equipment to Ukraine, to give lots of money to Ukraine, it means Russia has to now bring more soldiers and more equipment, which can lead to more death and longer conflict.”

In returning to Moscow, Dikhtyar joined a small cohort of Russians with ties to the West who refused to condemn the invasion despite the reputational risk. Valery Gergiev, the chief conductor of the Munich Philharmonic and a close ally of Putin, was fired from his position in Germany. Actor Vladimir Mashkov — known in the West for his roles in “Mission Impossible” and “Behind Enemy Lines” — strongly endorsed the war only to have his daughter refute him on U.S. television. Pianist Boris Berezovsky was dropped by his agent in March after urging Russian forces to cut off the electricity in Ukraine’s capital, Kyiv.

In the fashion world, Burberry, Chanel, H&M and Hermès all closed stores and online sales in Russia, joining the nearly 1,000 companies that have curtailed operations in the country, according to a Yale University project.

But in their race to the exits, Dikhtyar sees opportunity.

“The market is huge,” she said. “Think about it: 150 million people have nothing to wear because all the brands pull out.”

Those who have worked with Dikhtyar say her attempt to do business in Moscow while championing the war in Ukraine is provocative but not surprising.

“She likes to be controversial and start scandals,” said Ivan Bitton, the owner of a fashion house in Los Angeles who produced several photo shoots with Dikhtyar between 2015 and 2018.

Bitton pointed to her televised fight with a Black model on “The Face” over Dikhtyar’s statement that darker-skinned models would not succeed on the show. Dikhtyar said her remarks were misunderstood.”

Her comments about the war touch on sensitivities in a fashion industry that is home to both Ukrainians and Russians working side-by-side as models, photographers and designers.

Evgeny Milkovich, a Ukrainian photographer working in New York City, has photographed Dikhtyar on multiple occasions. His family home in Kyiv is a 10-minute drive from the city of Bucha, where Ukrainians were massacred in March. Milkovich said he was dismayed by how Kremlin “propaganda” has taken the “humanity” from some of the Russians in the fashion industry.

“People like Kira wage their own wars with their controversies,” he said. “We made several successful photo projects, but the essence of the people I work with is also important to me. So unfortunately, cooperation can easily end here.”

Born in Moscow, Dikhtyar showed early promise as a rhythmic gymnast, competing on Russia’s national junior team before being recruited as a model in her early teens. Tall and thin with blue-green eyes, Dikhtyar was represented by MC2, a modeling agency founded by Jean-Luc Brunel with backing from disgraced financier Jeffrey Epstein.

Dikhtyar said she first met Epstein at the age of 17 — but unlike scores of other women, she said he never touched her. Instead, the two forged a friendship that extended beyond 2008, when Epstein pleaded guilty in a Florida state court for soliciting underage girls for prostitution.

“Yes, It’s true. I was friends with Jeffrey Epstein. I’m not defending anything,” she said of the financier who committed suicide in 2019 while in custody facing charges of abuse and sex trafficking of girls.

In Russia, she captured headlines last year when she accused a once-powerful Russian oligarch of raping her when she was 15, a disclosure broadcast on state TV as part of her a campaign she launched against sexual violence. But Dikhtyar’s advocacy work on behalf of women is also a source of contention. Her professional website and accompanying media articles list her as a “UN Ambassador” for her international work on reforming sexual consent laws.

However, a spokeswoman for U.N. Women, the world body’s arm for gender equality, denied working with Dikhtyar and said the United Nations “has not appointed” her an ambassador, a title that requires the approval of U.N. Secretary General António Guterres.

Dikhtyar said she could not be faulted for how previous news articles characterized her work on behalf of women.

The prospects for Dikhtyar’s new retail pursuits are unclear.

The Russian economy is expected to contract by 8.5 percent in 2022 as international sanctions take a toll, according to the International Monetary Fund. But analysts say there is a potential market for moderately-priced clothing with Western panache.

“No matter how poor the Russian population has become, they still want to buy clothes and there are still people who have the money,” said Ekaterina Schulmann, a Russian political scientist at the Robert Bosch Academy in Berlin.

Olga Rebrova, a Russian stylist and the owner of the fashion brand Stanchy, cautioned that a new Russian clothing line would not be able to match the low production costs of established fast-fashion brands that manufacture in Vietnam, Bangladesh or China. But she said the mass exodus of Western retailers has made it “a little easier” for Russian businesses to succeed.

“When your competitors are big conglomerates, it’s quite difficult to compete as you don’t have such marketing budgets,” Rebrova said in an interview from Moscow. She said her own company has benefited “since I do not have big competitors now.”

In describing her business plan, Dikhtyar said designers would take a dress from her wardrobe, alter the design slightly, and mass produce it. “They basically take it, copy it, give it to factory, and in the morning you have thousands,” she said.

Jeff Sonnenfeld, a professor at the Yale School of Management, said if Dikhtyar’s business infringed on the intellectual property of other fashion brands, it could have a negative long-term impact on the Russian economy.

“If they’re going to be in defiance of the most minimal of global standards of respect for intellectual property, then Russia will become even more of an island,” said Sonnenfeld.

After taking part in a more-than two-hour interview, Dikhtyar later requested that an article not be published about her because she said she was not authorized to speak on behalf of the clothing line.

While pressing to stop publication, she said that she knows people in the Russian mafia. “The Russian mafia still exists,” she said “We will have to do some background check on you and your family for this kind of article.”

Moments later, she insisted it was a joke. “Are you scared of Russian mafia?” she asked.

Mary Ilyushina and Natalia Abbakumova in Riga, Latvia, and Paul Sonne in Washington contributed to this report.