How many Rusty Bowers Republicans are out there? 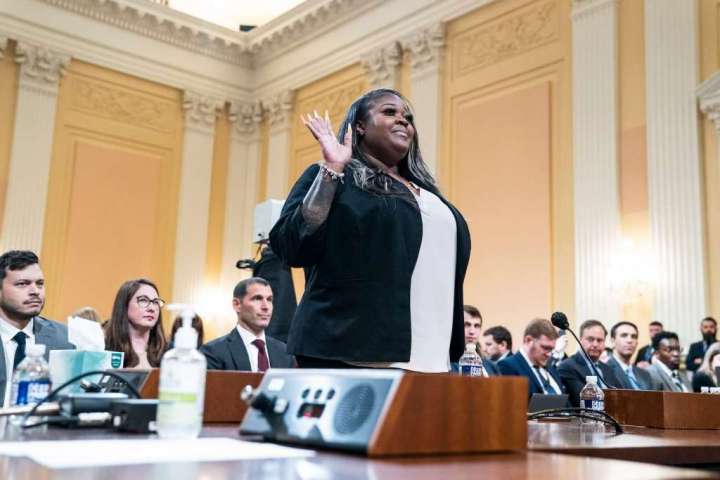 Note to every politician in the GOP: You have to decide. You can be a Rusty Bowers Republican. Or you can be a Donald Trump Republican.

That’s the road Arizona House Speaker Russell “Rusty” Bowers took when he refused to set aside the decision of his state’s voters to support Democrat Joe Biden — even though Bowers had supported and campaigned for Trump.

Or you can be someone for whom it is oaths, laws, the Constitution and the preservation of democracy that are entirely foreign to his worldview. For Trump, power and self-interest are all.

And so Trump encouraged violence against election workers, asked Georgia Secretary of State Brad Raffensperger to “find 11,780 votes” for him that didn’t exist, and encouraged his campaign to support fake electoral college slates that would back him, even though their states had supported Biden.

Many moments in the Jan. 6 committee hearings have underscored that there is a moral vacuum where Trump’s conscience should be. But there is something even worse than the attempted cheating and lawbreaking and lying. It is the former president’s willingness to target public servants who do their duty and egg on supporters to threaten them with violence.

Every Republican officeholder should listen several times to the words of Ruby Freeman, a Georgia election worker falsely accused of wrongdoing by Trump and his cronies: “Do you know how it feels to have the president of the United States target you?”

Her daughter, Wandrea ArShaye “Shaye” Moss, who also did civic service as an election worker, testified about Trump supporters breaking into her grandmother’s home to perform a “citizen’s arrest.” She told of how hateful, racist threats turned her into a recluse and how she gained 60 pounds.

Republican politicians have been stunningly quiet about the big doings at the Jan. 6 hearings. Their reticence speaks to the success of the investigative committee. It has put forward so much convincing evidence of Trump’s wrongdoing — with most of the testimony coming from Republicans — that GOP leaders are finding few ways of either defending him or discrediting the work of the committee. Its “just the facts, ma’am” approach leaves little room for dissent.

But silence is not the right response. Anyone who has read accounts of the hearings, let alone watched them in detail, can come to only one conclusion about Trump, what he tried to do with power and what he’d do if he ever came close to power again.

Refusing to break with Trump now, forcefully and definitively, is to demonstrate a complete indifference to what the ethics of a constitutional republic and democracy require. Remaining aloof is the opposite of being an Edmund Burke conservative — the sort who, like that 18th-century politician and philosopher, understands that institutions must be nurtured and that rule by mobs is dangerous.

Their terror of Trump’s power in Republican primaries can no longer be their excuse. Burke was right: “No passion so effectually robs the mind of all its powers of acting and reasoning as fear.”

Of course, I wish Bowers had not said before his testimony that he’d vote for Trump again against Biden. His testimony made the best possible case against Trump, and it should set all Republicans free (himself included) to reason and to act. A solid conservative, Bowers stood up for his oath — and what he saw as the demands of his faith — when doing so was hard, when he was besieged by Trump and his henchmen. Is he not the sort of Republican a patriotic American could tell their children about with pride?

They should let Raffensperger, who beat a Trump-backed candidate in a Georgia primary early this year, set them free. He offered a simple but weighty reason that Trump’s election fabrications and manipulations must be rejected — despite Trump’s threats and lobbying. “The numbers are the numbers,” Raffensperger said. “The numbers don’t lie.”

And the testimony of Freeman and Moss cries out to Republicans: Turn back from Trump’s path once and for all. To hang on to power, Trump was willing to use threats and lies to destroy the lives of two grass-roots citizens dedicated to the most basic work of democracy. Can any Republican in good conscience defend what Trump did?

The Jan. 6 committee has done Republicans a great service. It has lifted up members of their party who showed integrity and courage. And it has laid out in lurid detail exactly how egregious Trump’s behavior was.

This is the moment for Republicans to rid themselves of Trump. I wish I had more confidence that the party would seize the opportunity.

Congressional hearings: The House committee investigating the attack on the U.S. Capitol has conducted more than 1,000 interviews over the last year. It will share it’s findings in a series of hearings starting June 9. Here’s what we know about the hearings and how to watch them.

The riot: On Jan. 6, 2021, a pro-Trump mob stormed the U.S. Capitol in an attempt to stop the certification of the 2020 election results. Five people died on that day or in the immediate aftermath, and 140 police officers were assaulted.

Inside the siege: During the rampage, rioters came perilously close to penetrating the inner sanctums of the building while lawmakers were still there, including former vice president Mike Pence. The Washington Post examined text messages, photos and videos to create a video timeline of what happened on Jan. 6.

Charges: Proud Boys leader Enrique Tarrio and four lieutenants have been charged with seditious conspiracy, joining Oathkeepers leader Stewart Rhodes and about two dozen associates in being indicted for their participation in the Capitol attack. They’re just some of the hundreds who were charged, many of which received punishments substantially lighter than what the government requested.