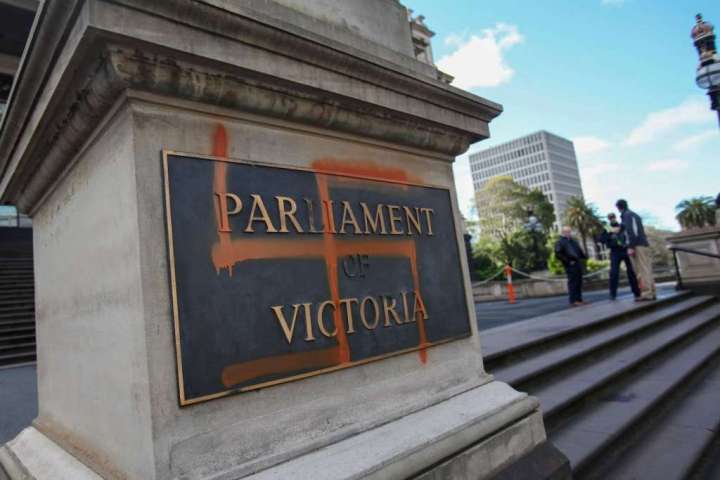 Australia’s Victoria state — home to Melbourne — passed legislation Tuesday that bans the public display of Nazi symbols such as the swastika. It is the first jurisdiction in the country to enact restrictions on the swastika, which has been appropriated by far-right extremists.

The law comes as Australia faces a spike in ideological extremism. A top federal police official told a public broadcaster in October that the number of far-right-linked terrorism investigations had increased by 750 percent in about 18 months, even though religious extremism was still a larger threat. The Australian Security Intelligence Organization, a domestic security agency, said in 2019 that about a third of its counterterrorism investigations involved right-wing extremism. That year, an Australian gunman killed 51 people at two mosques in Christchurch, New Zealand.

“One of the most concerning aspects of these investigations is the growing number of young people — predominantly young men — who are being radicalised,” the agency wrote last year.

The law, which takes effect in six months, carries punitive measures that may include a prison sentence of up to 12 months, a fine of up to roughly $15,000 or both. State lawmakers held a hearing last week in which experts largely agreed on the need to deter extremism, though rights groups such as Liberty Victoria cautioned that the law should not undermine free speech.

“The Nazi symbol glorifies one of the most hateful ideologies in history — its public display does nothing but cause further pain and division,” said state Attorney General Jaclyn Symes.

While a majority of Australians are of European descent, the country has a fast-growing Asian population. Immigration has also made it one of the most multicultural countries in the Western world.

The rise of domestic extremism in America

“Australia has a long history of extreme right-wing activity, but it has certainly intensified in recent years,” said Levi J. West, an extremism expert at Charles Sturt University. “The tempo has dramatically increased in the post-Christchurch period.”

The new law includes certain exceptions for religious and educational use. “Parliament recognises the continued importance of the swastika as an ancient and auspicious symbol of purity, love, peace, and good fortune in Buddhist, Hindu, Jain and other religions,” the bill’s authors wrote. The misuse of the swastika is an affront to these worshipers, they added.