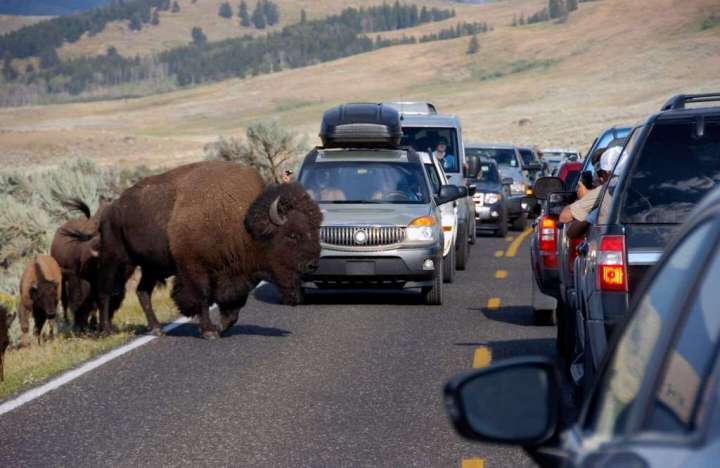 Wild animal attacks are rare, but dangerous encounters do happen, especially when humans ignore — or are unaware of — wildlife-viewing rules and etiquette. Over Memorial Day weekend, a bison in Yellowstone gored an Ohio woman who had stood within 10 feet of the animal, significantly short of the park’s directive to stay at least 25 yards (or 75 feet) away. The burly beast flung the visitor 10 feet in the air and inflicted a puncture wound, among other injuries.

“Domestic animals account for most animal attacks in the U.S., but if we are just talking about wildlife, snakes and rodents (rats, squirrels, etc.) make up the vast majority,” Mark Hofberg, a campaigns officer for the International Fund for Animal Welfare, a D.C.-based nonprofit, wrote in an email. “The high-profile attacks from bears, cougars and other large mammals that you hear on the news are much rarer but have a higher chance of being dangerous, so it pays to be prepared.”

With the summer outdoor season upon us, we will undoubtedly bump into animals in their natural habitats, a prospect that delights one group more than the other. “Wild animals want to be left to themselves,” said Cameron Harsh, programs director in the U.S. office of World Animal Protection, an international nonprofit group. “They don’t want to interact with humanity.”

To ensure a peaceable kingdom, we asked wildlife specialists in government agencies and nonprofit organizations for advice on how to keep all creatures — two-, four- and no-legged, with or without a tail, most with teeth — safe in the wild. Here are their guidelines:

Familiarize yourself with the fauna in the park or region you plan to visit. “The basic rule of thumb, whether you are going to Shenandoah or Yellowstone or Denali [national parks], is to know what wildlife calls that its home,” said Bart Melton, wildlife program director at the National Parks Conservation Association (NPCA), a D.C.-based nonprofit. Learn to identify the local residents (grizzlies have pronounced shoulder humps, while black bears don’t) and note their schedules. For instance, ungulates, such as bison, and coyotes are generally crepuscular, or most active at dusk and dawn, whereas alligators are diurnal and nocturnal. (They basically keep the same hours as a 24-hour diner.)

You can find this information on park websites (for national parks, search under the “Nature” or “Safety” headings) and at visitor centers and tourism offices. Trailheads typically feature bulletin boards that highlight the wildlife and share best hiking practices. State wildlife management agencies are also valuable resources. For example, the Florida Fish and Wildlife Conservation Commission’s website has a page called “Living with Wildlife and Preventing Wildlife Conflicts” that includes tips on securing food and links to short bios for nearly 400 species, including the black bear, bull shark and cottonmouth/water moccasin. The Arizona Game and Fish Department’s “Living with Wildlife” section offers a primer on the state’s 13 rattlesnake species, plus guidance on how to handle a run-in with a mountain lion, bobcat, bear or javelina, among other critters.

Be extra vigilant during big annual events. During calving and mating seasons, for example, animals may behave more aggressively. In the spring, bears head out in search of food after a long winter’s fast. Around the same time, cubs will venture out of their dens for the first time, with their protective mothers nearby. “Make sure if you see cubs, you are of aware of the mother bear’s location,” Melton said. “It’s extremely important to avoid getting between a female bear and her cubs.” Elk, bison and moose also calve during this period, so give the parents and their offspring a wide berth. In the fall, bears binge-eat before hibernation, a period called hyperphagia, and elk, caribou, moose and other hoofed animals compete for mates during the weeks-long rut. “The male elk are pretty feisty,” Melton said. For this reason, never come between the swaggering males and their objects of affection.

Give animals lots of space. Although there is no official distancing figure, experts, including those at many national parks, recommend staying at least 75 feet from nonpredatory creatures and 300 feet from predators. David Lamfrom, vice president of regional programs at NPCA, recommends a 50-foot buffer around elephant seals and sea lions, whose males are territorial, and at least six feet between you and a venomous snake. “If you’re close enough to take a selfie,” said Sarah Gaines Barmeyer, senior managing director for NPCA’s conservation programs, “you’re too close.” Speaking of photography: Invest in a telephoto lens.

A guide to volunteering in the outdoors

Always stick to designated trails and viewing platforms. Avoid surprising the wildlife. “Be predictable,” said Lamfrom, adding that animals such as bears and moose are typically wise to the heavily peopled routes. At Shark Valley in Florida’s Everglades National Park, home to more than 200,000 alligators, visitors can observe the large reptiles from a tram or along a wooden boardwalk. “They’re not going to climb up and get you,” Barmeyer said. However, Meredith Budd, regional policy director with the Florida Wildlife Federation, warns against lingering at the water’s edge, especially at retention ponds and particularly if you have a small dog in tow. “If there’s a body of water in Florida,” she said, “there’s likely to be an alligator in it.”

Leave no trace of food behind. Clean up all your garbage and sweep up any crumbs. If you are camping, lock your edibles in a bear-proof container. “In most cases, wildlife wants to avoid you, but if you are leaving the aluminum foil out with burger drippings from your cookout last night, you are making it hard for them to ignore you,” Hofberg said. Never leave a backpack containing food lying around, even for the time it takes to snap a photo of a vista or to tie your shoe. Be mindful of odors that might smell like a medicine cabinet to you but a Las Vegas buffet to a wild animal. For instance, Melton recommends campers do not bring toothpaste inside their tent or put deodorant on before lights-out. Also, don’t sleep in your hiking clothes, especially if you grilled burgers in them.

Take preventive measures. On hiking trails in bear country, announce your presence vocally. “Let the bears know you are there,” Melton said. “Continual renditions of good singalong songs or taking turns every couple of minutes with a, ‘Hey, Bear!’ yelled loudly is a good approach.” If you notice a carcass, don’t rubberneck: Pass it as quickly as possible. In tall marsh grass or wetlands, wear knee-high boots to protect your legs from snakes. Before stepping over a log, check the other side for snakes waiting for unsuspecting prey. In stingray territory, such as Florida’s Gulf Coast, shuffle your feet in the sand as a warning signal. In waters inhabited by sharks or barracuda, leave the shiny clothes and glittery, dangling accessories for the disco. “Don’t look like a fish,” Barmeyer advised. Also, resist the urge to swim in a school of fish, which is basically a drive-through for aquatic predators.

In a dangerously close encounter, follow the proper course of action. This could vary by species. For example, with black bears, directly face the threatening animal and fight back if the situation turns grave. With grizzlies, avoid eye contact and play dead in the event of an attack. However, a few prevailing rules apply. “In general, for animals that are predators, you don’t want to act like prey,” Hofberg said. “So don’t turn your back, and don’t run away. Make yourself large, and if you are with others, gather together.” In its “Staying Safe Around Bears” section, the National Park Service suggests speaking calmly to the bear, as if you were trying to console a child, and slowly waving your arms. Carry bear spray, but use it only in an emergency. The Be Bear Aware Campaign offers free instruction on handling the deterrent. Melton reminds hikers that bear spray is not just a stronger version of mosquito repellent: “Don’t spray it on your tent.” To defend yourself against a moose, bison or elk, try to insert an object, such as a tree or boulder, between yourself and the animal. For a comprehensive guide to de-escalating conflicts with wildlife, check out the “Wildlife Safety Tips” section from outdoor retailer REI.

Show respect. It should go without saying: Never feed, taunt or harass the animals.