Rupert Murdoch and Jerry Hall to divorce after six years 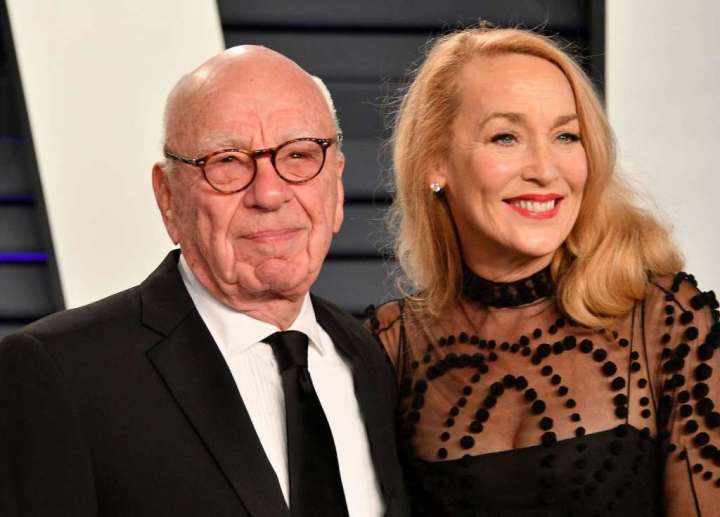 Rupert Murdoch, the mogul who controls Fox News, the Wall Street Journal and the British Sun tabloid among a host of other media properties, and former actress-supermodel Jerry Hall are divorcing after six years, according to two people familiar with the discussions.

This signals the end of Murdoch’s fourth, and shortest, marriage. The pair wed in March 2016 when Murdoch was 85 and Hall was 59, in a London ceremony that resembled a boldface blended family portrait with her children (whose father is Mick Jagger) and his (who include the now-CEO of Fox Corp.) in attendance.

As emissaries of wildly disparate celebrity worlds, the pair were the subject of endless media fascination. Shortly after their nuptials, the Daily Mail declared “the couple couldn’t keep the smiles off their faces” at a New York City gala. Years later, the same newspaper published paparazzi photos of a “romantic evening meal” in London.

From 2016: Jerry Hall and Rupert Murdoch seem like a perfectly fine couple to me

But Murdoch’s marriage to Hall still managed to avoid most of the tabloid friction that crackled through his previous union with Wendi Deng. Deng, a former News Corp employee who met Murdoch at a company event, famously smacked down a protester who threw a foam pie at Murdoch during a 2011 British parliamentary hearing. And it was during that 1999-2014 marriage that Murdoch broke up the terms of the trust that controls his family’s media empire to make space for his two daughters with Deng. Around the same time, Lachlan Murdoch, Murdoch’s older son and then his heir apparent, left the family business and returned to Australia; he has since returned as a key leader of the Murdoch empire.

Murdoch divorced his second wife, Anna, a former newspaper reporter, in 1999 after 32 years of marriage and three children. He had one child with his first wife, Patricia Booker, to whom he was married from 1956 to 1967.

While a divorce from Hall is unlikely to impact the trust, people close to the elder Murdoch are on the watch for how it might affect his attention to his businesses. One speculated that he may be more inclined to take more interest in the goings-on of the two companies his family controls.

Although Murdoch sold the bulk of his empire in a $71 billion sale to Disney in 2019, he remained a formidable presence in both media and politics through his media outlets. He was a frequent unofficial adviser to former president Donald Trump, although he distanced himself from Trump leading up to the 2020 election; the two men’s relationship further suffered after Murdoch’s Fox News projected that Trump lost Arizona, an election call that came before other news organizations followed.

Hall, a Texas native, was one of the defining top models of the 1970s before segueing into a handful of 1980s acting roles as well as half of one of the era’s most glamorous jet-set couples. But her two-decade relationship with Jagger ended in 1999 when she filed for divorce — and a British court agreed with Jagger’s argument that their 1990 wedding in Bali had never been a legally binding ceremony. While tabloids speculated that Hall received only a tiny fraction of Jagger’s fortune at the time of their annulment, their lawyers released a joint statement saying “a mutually acceptable legal and financial settlement has been reached.”