The harassment faced by Jan. 6 witnesses after Trump’s false claims 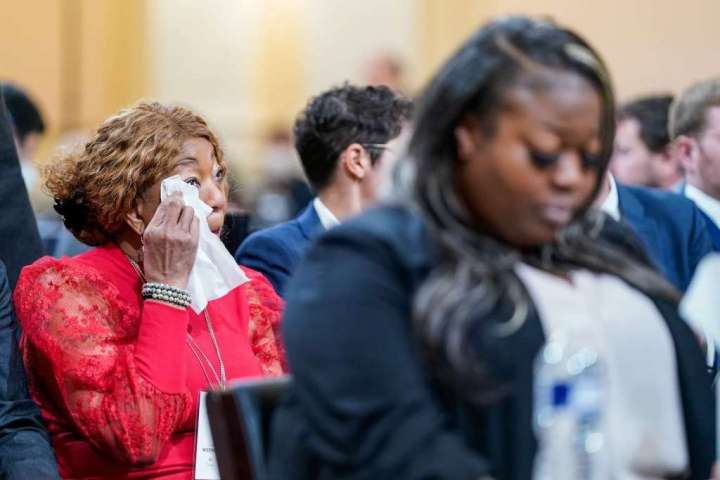 The committee to investigate the Jan. 6, 2021, attack, throughout this month has revealed new facts about the plot to overturn the 2020 election — but the most jaw-dropping moments from the hearings have often been the personal and emotional ones.

“The system held, but barely,” Rep. Adam B. Schiff (D-Calif.) said. And across the country, these officials who stood up to the pressure campaign faced harassment, death threats, break-ins to their homes and extreme stress on their families. Many election workers report that the trend continues today.

3 takeaways from the 4th Jan. 6 hearing

Here are some of the threats faced by those who either stood up to Trump or were targeted by his false election claims, according to testimony shared on Tuesday.

“I received just shy of 4,000 text messages over a short period of time”: That’s Michigan Senate Majority Leader Mike Shirkey (R), describing what happened after Trump retweeted his phone number, pressuring him and other Republican state lawmakers to flip the state’s election results to him. Shirkey said the people who texted “were believing things that were untrue.”

“[W]e had to disconnect our home phone for about three days because it would ring all hours of the night”: Pennsylvania House Speaker Bryan Cutler (R) said he got daily voice mails from Trump’s legal team. There were also protests outside his district office and his home, including one announced by Stephen K. Bannon. “My son Mike — my then-15-year-old son — was home by himself for the first one.”

“He had a pistol and was threatening my neighbor”: Arizona House Speaker Russell “Rusty” Bowers (R) said his office received “in excess of 20,000 emails” and “tens of thousands of voice mails.” He said protests became “a pattern in our lives,” with people blaring loudspeakers and calling him corrupt. In one case, Bowers said, there was a man with “three bars on his chest” (seemingly a reference to the Three Percenters) “and he had a pistol and was threatening my neighbor — not with the pistol, but just vocally.” Bowers added that “at the same time, on some of these, we had a daughter, who was gravely ill, who was upset by what was happening outside.” (Bowers’s daughter died weeks after Jan. 6.)

“My stomach sunk, and I thought, ‘It’s me. … Are they coming with guns?‘ ”: Michigan Secretary of State Jocelyn Benson (D) described protesters gathering near her house one evening, saying, “Are they going to attack my house? I’m in here with my kid. I’m trying to put him to bed. And so that was the scariest moment — just not knowing what was going to happen.”

“There was nowhere I felt safe. Nowhere. Do you know how it feels to have the president of the United States to target you?”: That’s Ruby Freeman. She and her daughter, both former election workers in Georgia, were falsely accused of election fraud by the president and his allies — multiple times, by name. Trump lawyer Rudy Giuliani falsely said Freeman and her daughter were passing a “USB port” to each other — she testified it was a ginger mint. Then the threats came, and Freeman said it ruined her reputation.

“I get nervous when I have to give my name for food orders. I’m always concerned of who’s around me,” she said.

“All for doing my job”: Freeman’s daughter, Wandrea ArShaye “Shaye” Moss, was also at the center of those false election-fraud claims. At the time, she had been an election worker in Fulton County for years. She was shocked when a colleague told her that Trump and his allies had singled her out. The threats came over social media. “I had lot of threats wishing death upon me, telling me that, you know, I’ll be in jail with my mother, and saying things like, ‘Be glad it’s 2020 and not 1920.’ ”

She testified Tuesday that she’s afraid to go anywhere to this day: “All for doing my job.”

“Some people broke into my daughter-in-law’s home”: Perhaps no one faced as much public pressure from Trump as Georgia Secretary of State Brad Raffensperger (R). Raffensperger testified in-person Tuesday that in addition to protests at his house, someone broke into his daughter-in-law’s home after the election. He explained that she is a widow with two children, so “we were very concerned about her safety.”

“Why didn’t you just quit and walk away?” Schiff asked him.

“Because I knew that we had followed the law and we followed the Constitution,” he replied. “And I think sometimes moments required you to stand up and just take the shots. You’re doing your job. And that’s all we did.”

Aaron Blake contributed to this report.

5 takeaways from the Jan. 6 hearing on Trump’s Justice Dept. plot

What Kavanaugh’s gun case concurrence does — and doesn’t — mean

As Jan. 6 committee targets Trump, his consternation at McCarthy grows

Miss Manners: Should couples sign greeting cards for each other?

She found handwritten letters from her enslaved ancestor: ‘I’m just blown away’

Submit your photo to the 2022 Washington Post Travel contest