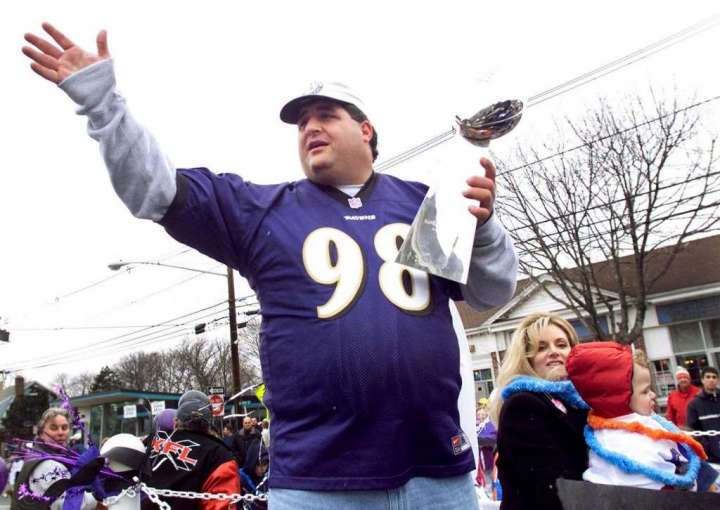 Tony Siragusa, a Super Bowl-winning NFL defensive tackle and television personality whose massive physique was matched by his outsize public persona, has died at age 55.

The Baltimore Ravens, for whom he starred from 1997 to 2001, said he died “unexpectedly” Wednesday morning. A cause of death was not immediately made known.

Declaring that he and his wife were “stunned and heartbroken” at the news of Siragusa’s death, Ravens owner Steve Bisciotti said in a statement: “He was a special person and clearly one of the most popular players in Ravens history.

“Our deepest prayers and sympathies go out to Kathy, their three children and the rest of the Siragusa family,” Bisciotti added. “This is a tremendously sad day for the Baltimore Ravens. We appreciate everyone who has expressed an outpouring of support for our players, coaches and staff.”

Earlier Wednesday, the Ravens had shared news of the death of 26-year-old linebacker Jaylon Ferguson. A cause of death in his case was yet to be announced.

Indianapolis Colts owner Jim Irsay, with whose team Siragusa spent his first seven years in the NFL, had confirmed reports on Siragusa’s death that began to emerge Wednesday afternoon.

“I’m heart broken as is all of Colts Nation,” Irsay tweeted.

Nicknamed “Goose,” Siragusa achieved national fame after he left the Colts and joined the Ravens in 1997. A 6-foot-3, 330-pound nose tackle who clogged opposing running lanes, he was a key figure on a record-setting defense that helped the 2000 Ravens win Super Bowl XXXV. After proving one of the most entertaining figures during the pre-Super Bowl media day, Siragusa delivered a star turn several months later when Baltimore featured in the first season of HBO’s “Hard Knocks.”

“There was no one like Goose — a warrior on the field and a team unifier with a giving, generous heart who helped teammates and the community more than most people know,” former Ravens coach Brian Billick said. “We would not have won the Super Bowl without him.”

Former Ravens running back Jamal Lewis said Wednesday he was glad that he, Siragusa and other members of the 2000 championship team had “a chance to be together one last time” at a celebration earlier this year of that triumphant squad.

Well before social media and “building your brand,” Tony Siragusa used Super Bowl XXXV to become a media star. He leveraged his wild persona to become a broadcaster, actor and pitchman. He even landed on The Sopranos. He was so savvy and such a character. RIP Goose. pic.twitter.com/YqUKRDMMY9

“Goose was one of the most humble and funniest guys I knew,” Lewis said in a statement. “I can remember his locker being next to mine on game day. He was never bothered and enjoyed life. While I had butterflies in my stomach, he was cracking jokes and pumping me up at the same time. … He will be truly missed.”

Several years after his playing career ended following the 2001 season, Siragusa was hired as an NFL sideline reporter for Fox Sports. He brought a light touch to the role until he and the network parted ways in 2016.

A New Jersey native, Siragusa also appeared on-screen as a minor character in HBO’s hit show, “The Sopranos,” and he had a part in a 2002 Spike Lee movie, “25th Hour.”

In addition to starring for his high school football team, for which he punted and played on the defensive line, Siragusa was a standout wrestler who won a New Jersey state title in 1985. He went on to play football at the University of Pittsburgh because, as he explained (via the Panthers), “If I wanted to learn a school song, I would’ve gone to Notre Dame or Penn State. I want to kill people on the football field. That’s why I came to Pitt.”

“Tony truly was bigger than life, on and off the field,” Pitt Coach Pat Narduzzi said. “His post-football life took him so many places but he never forgot Pitt. We could always count on him to send the best recorded pep talks to our guys before our biggest games. ‘The Goose’ leaves a great legacy and he will be sorely missed.”

Before he became a beloved football personality on TV with @NFLonFOX…

He played college football at Pitt, becoming a fan favorite and one of the best defensive linemen in the nation.

Knee injuries hindered Siragusa’s final two seasons at Pitt, and he went undrafted by the NFL in 1990 before signing with the Colts as a free agent. He went on to play 12 seasons with Indianapolis and Baltimore.

“This is a tough one,” said former Ravens linebacker Ray Lewis, another member of the team’s dominant defense in 2000. “I love Goose like a brother. From the first day we met, I knew that life was different. I knew he was someone who would change my life forever. He was a one-of-a-kind person who made you feel important and special. You can never replace a man like that.”