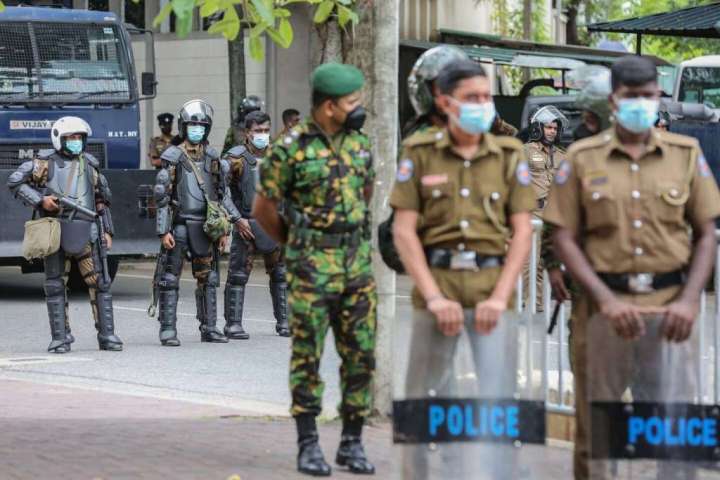 “Collapsed.” A “serious situation.” And potentially, a “fall to rock bottom.”

Those are some of the ways Sri Lanka’s prime minister described his country’s faltering economy Wednesday as the island nation faces extreme food and fuel shortages.

The comments to Parliament from Prime Minister Ranil Wickremesinghe come after weeks of turmoil caused by government incompetence, experts say — a dynamic exacerbated by global inflation and supply chain disarray amid the Russian invasion of Ukraine and the lingering impacts of the coronavirus pandemic.

“We are now facing a far more serious situation beyond the mere shortages of fuel, gas, electricity and food,” Wickremesinghe said, speaking in Sinhala. “Our economy has faced a complete collapse.”

Sri Lanka, a country of 23 million off the southeastern coast of India, has essentially had the door to fuel supplies shut in its face, as its national Ceylon Petroleum Corp. is $700 million in debt.

Inside the collapse of the Rajapaksa dynasty in Sri Lanka

Though Wickremesinghe’s proclamation was dramatic, it wasn’t necessarily overstated. “The economy is certainly on the brink of collapse,” said Nirvikar Singh, an economics professor and expert on South Asia at the University of California at Santa Cruz. The government has been “astonishingly irresponsible and incompetent,” having mismanaged the country’s monetary and economic policy since 2019, he said.

In recent days, lines for gasoline have stretched for miles. On Monday, schools and government offices in major cities were shuttered for at least a week with the fuel shortage forcing the country to a screeching halt.

Food insecurity has also plagued Sri Lanka, with data from the country’s central bank showing a sharp uptick in prices for all food items. Rice, a staple in the country, costs nearly three times as much as it did a year ago. Prices of essential produce such as tomatoes have gone up by four times from the previous year. Last week, government workers were asked to grow their food in their backyards.

The signs of the devastating crisis are everywhere, including medicine shortages at hospitals and businesses on the brink of closure. At the main public hospital in the capital, Colombo, essential supplies such as medicine and catheters are scarce.

“We are trying to manage somehow, but there is a dearth,” said the hospital’s spokeswoman, Pushpa De Soysa. “We just have to be judicious in using what we have.”

In the nearby, once bustling Colpetty neighborhood, restaurant owner Pradeep Vithanachchi has been forced to turn to the black market for cooking gas, which is hard to find and expensive when sporadically available.

“It is now an existential crisis for both the business and us,” he said of the restaurant — a fixture there for four decades that he inherited from his father.

Sri Lanka is waiting for loan assistance from the International Monetary Fund, which Wickremesinghe said would not only provide tangible help, but also act as a “seal of approval” so that “the world will once again trust us,” allowing the country to receive low-interest loans from other nations.

The contracting growth is a matter of grave concern, economists say. Ahilan Kadirgamar, an economist at the country’s Jaffna University, said the economy was likely to shrink by 10 percent. “People have given up on production, and there is no planning or process to address this,” he said, adding that it would take at least five years for the country to find solid footing again.

Singh said international financial help “should be able to turn things around relatively quickly, though there will be painful after-effects.” He noted that Sri Lanka is a relatively small economy, meaning the finances necessary to lift the island out of its economic implosion are “not large on a global scale.”

Should Sri Lanka emerge from the chaos, the experience would offer one upside, Singh said, as economic concerns swirl globally.

“Sri Lanka does provide a lesson to other countries about the basics of economic management,” he said. “These lessons are not new but sometimes are forgotten.”

Masih reported from New Delhi and Farisz from Colombo.