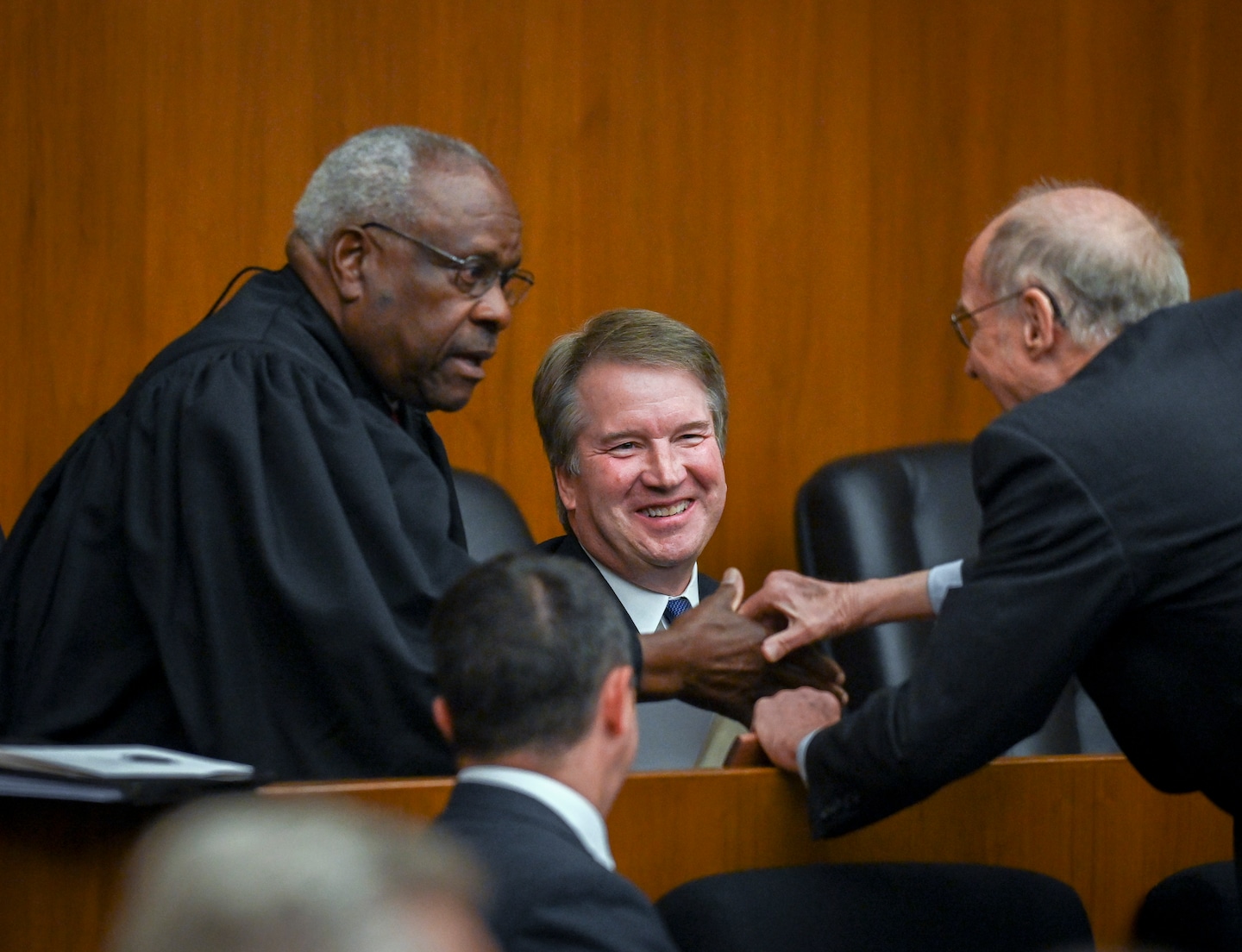 For the second straight day, members of the newly powerful conservative wing of the Supreme Court have released a major decision — this one overturning Roe v. Wade — while seeking to insulate the court from charges that its landmark ruling could be a key step toward more extreme rulings.

In this case, though, that assurance is undercut by one of the court’s own conservative members, Justice Clarence Thomas.

In both Justice Samuel A. Alito Jr.’s opinion overruling Roe and Justice Brett M. Kavanaugh’s concurrence, each make a point to clarify that the decision ending a constitutional right to abortion doesn’t endanger other unenumerated rights the court has recognized, such as same-sex marriage, interracial marriage and contraception.

Alito seeks to debunk this claim at length, saying it “is hard to see how we could be clearer” that the decision doesn’t cast doubt on those precedents. He even suggests, in a particularly remarkable passage, that raising the prospect might amount to cheap political maneuvering.

Citing the three liberal justices’ dissent, specifically its discussion of Roe and the landmark contraception case Griswold v. Connecticut, he wagers that it is perhaps “designed to stoke unfounded fear that our decision will imperil those other rights.” That’s a pretty significant suggestion to make about one’s colleagues in the court.

But if you want to understand why the three liberal justices and abortion rights supporters might, at the very least, worry about such things, you only need to look at what Thomas said in his own concurrence.

In it, Thomas calls for not just revisiting Obergefell v. Hodges (same-sex marriage), Griswold and another contraception case, but overturning those precedents as well.

Thomas writes that the abortion case is indeed unique, and that “no party has asked us to decide ‘whether our entire Fourteenth Amendment jurisprudence must be preserved or revised.’ ” He adds: “Thus, I agree that “[n]othing in [the Court’s] opinion should be understood to cast doubt on precedents that do not concern abortion.”

Then arrives the unstated “but.”

“For that reason, in future cases, we should reconsider all of this Court’s substantive due process precedents, including Griswold, Lawrence [v. Texas]” — a landmark case invalidating anti-sodomy laws — “and Obergefell,” Thomas writes. “Because any substantive due process decision is ‘demonstrably erroneous,’ we have a duty to ‘correct the error’ established in those precedents.”

Thomas then explicitly suggests that he would like to not just revisit but overrule those precedents.

“After overruling these demonstrably erroneous decisions, the question would remain whether other constitutional provisions guarantee the myriad rights that our substantive due process cases have generated,” he writes.

Thomas, notably, does not address whether another unenumerated right that the court’s critics have often spotlighted as being potentially endangered by overturning Roe — interracial marriage (Loving v. Virginia) — should be revisited or overruled. He doesn’t mention it, even as Kavanaugh includes the case among those that in his estimation should not be considered endangered.

So on the one hand, we have two conservative justices bristling at the notion that their decision could be used to undermine established federal rights on contraception and marriage. On the other, you have one of their colleagues arguing in the same case that it is indeed time to overrule those cases as well.

That doesn’t, of course, mean the court will actually do so. Thomas is but one of nine justices, and if Alito and Kavanaugh aren’t on board with revisiting those precedents, it won’t happen. Also, the idea that Thomas would support overturning these precedents isn’t shocking. (Many of the quotes he uses above are from his own past opinions and concurrences.) And later in that same paragraph, Thomas does leave open the possibility that “other constitutional provisions guarantee” the rights derived from “substantive due process cases.”

But when one of their own colleagues and ideological allies is calling for overruling these cases — in his concurrence in the abortion case, no less — it becomes significantly more difficult to argue that it is some whole-cloth liberal fantasy (or even, in Alito’s suggestion, a scare tactic) that this case could also be used to chip away at those rights. It’s not the largest logical leap, despite protestations to the contrary. That doesn’t mean it will happen, but abortion rights and other rights are apparently closely linked in their own colleague’s mind.

It’s also worth parsing these assurances. Alito and Kavanaugh also very notably say that those precedents aren’t endangered by this decision, specifically, and not necessarily that they can’t or shouldn’t be revisited at all.

In that way, this is similar to Kavanaugh’s and Chief Justice John G. Roberts Jr.’s concurrence in a key gun case yesterday. Both sought to underline that the court striking down New York’s law requiring as special need for concealed-carry permits wouldn’t mean anyone can carry a gun outside their home. They emphasized that the ruling didn’t endanger less far-reaching restrictions in 43 states.

But again, there was also Thomas (who wrote the opinion) suggesting the specifics of those 43 states’ laws could indeed be reviewed “because any permitting scheme can be put toward abusive ends.”

We shouldn’t rush to assume that the court will go much further in striking down gun restrictions or other unenumerated rights, but PR is PR — even when it’s coming from a Supreme Court justice.