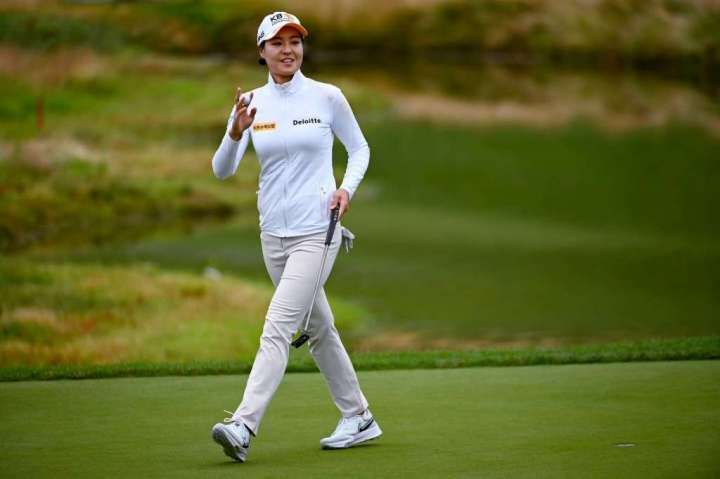 On a course that has served as the backdrop for some of golf’s most indelible moments, South Korea’s In Gee Chun, a mathematics prodigy in her youth, didn’t spend much time counting the birdies that led to her record-setting first round Thursday at the Women’s PGA Championship.

Chun instead was too busy discussing with her caddie an annoying pimple on her lip and how much she enjoyed the kiwis she and her team found at a Korean market not far from Congressional Country Club in Bethesda.

The carefree demeanor allowed Chun to declutter her mind, ignore recent travails and collect nine birdies for an 8-under-par 64, a record at the renovated Blue Course and the lowest score in the first round of the Women’s PGA Championship, the third major of the season.

Seeking her first victory in four years, the two-time major champion completed the morning tee times seven shots clear of a cluster of players, including Americans Nelly Korda, the world No. 2, and ninth-ranked Jennifer Kupcho, the winner at last week’s Meijer LPGA Classic.

“I don’t know what course In Gee was playing,” said an incredulous Korda, who missed a short putt for a birdie at No. 17 and bogeyed the 18th on the 6,984-yard layout that played at least several hundred yards longer after two-plus inches of rain fell overnight and continued through portions of the morning rounds.

The soggy conditions that yielded virtually no roll on the fairways made Chun’s performance that much more astounding. Not only is the layout the longest in Women’s PGA Championship history, surpassing Hazeltine’s 6,804 yards in 2019, but Chun ranks 117th in driving distance.

She overcame a lack of distance off the tee by hitting 14 of 14 fairways and 15 of 18 greens in regulation, relying a handful of times on her 7-wood for blind approaches to greens. Chun, who began her round on the back nine, wielded that club as deftly as many of her competitors did their short irons and wedges.

At the 437-yard par-4 18th, for instance, Chun, pulling the trusty 7-wood out of her bag, landed her second shot within five feet for a fourth consecutive birdie and fifth on her opening nine. Her only bogey came at the par-4 No. 1, but she followed with three consecutive birdies.

Her final birdie came at the 174-yard par-3 seventh, where again she leaned on her 7-wood to leave a midrange birdie in a round reminiscent of Rory McIlroy’s 6-under 65 for the 18-hole lead at the 2011 U.S. Open, the last major held at Congressional and the most recent professional major in the D.C. area.

Congressional has hosted three U.S. Opens, including Ken Venturi’s iconic victory in 1964 amid oppressive conditions that left him barely able stand, as well as the 1976 PGA Championship and the 1985 U.S. Senior Open. This week is the first women’s major at Congressional.

“I have motivation because if I keep playing golf, then I have a lot of chances to play all the good golf courses in the world,” said Chun, who needed just 25 putts and one-putted 11 holes. “I really enjoy playing the good golf courses, and I feel very honored to play golf [at a venue] with all the history.”

Chun gave little indication entering this week that she was about to produce some of the most exquisite golf of her career. In her two most recent events, the Meijer LPGA Classic and the ShopRite LPGA Classic, she finished tied for 67th and tied for 72nd, respectively.

But a visit to play Congressional roughly one month ago provided insight to a layout the vast majority of other players navigated for the first time either during Tuesday’s pro-am or Wednesday’s practice rounds.

The advance scouting in part led to Chun’s second-lowest 18-hole score in a major, behind an 8-under 63 in the first round of the 2016 Evian Championship. She won that season’s fourth major championship wire-to-wire at 21-under 263, establishing the lowest 72-hole score in relation to par regardless of gender.

One year earlier, Chun had won the U.S. Women’s Open by one shot over Amy Yang at Lancaster Country Club for her first victory on American soil. Chun accepted an invitation to join the LPGA Tour immediately after that and went on to become the second player in LPGA Tour history to win majors as their first two titles.

The first to do so was one of Chun’s childhood golfing idols, Se Ri Pak, also from South Korea. The World Golf Hall of Fame inductee in 2007 won five majors, including three Women’s PGA Championships, and 25 times on the LPGA Tour, inspiring the ascension of Korean female players.

“She’s just on fire,” world No. 8 Brooke Henderson, who shot a 1-under 71, said of Chun. “Sometimes In Gee does that. Sometimes she just plays so well, and nothing bothers her, and it’s really cool to see. Hopefully I can be more like her tomorrow and make some more birdies and climb up the leader board.”