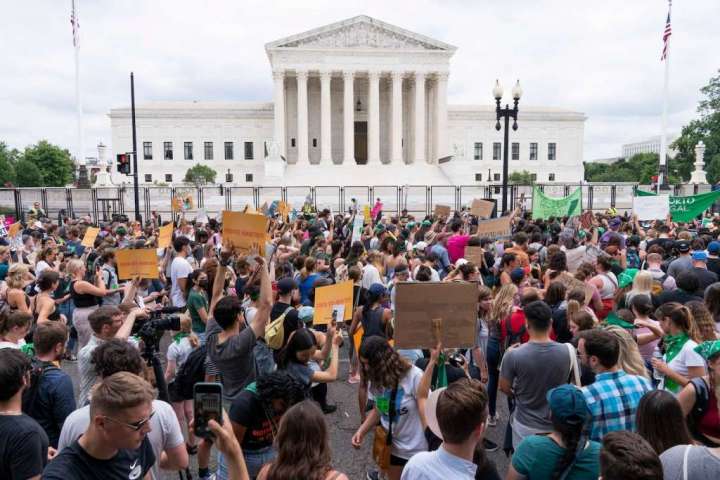 The Supreme Court’s decision to eliminate the constitutional right to abortion is an unfolding tragedy for American women and an indelible stain on the court itself. The harm to women is immense but can be ameliorated with efforts in the public and private spheres to safeguard access to abortion. The damage to the court cannot be undone.

This radical conservative majority — unheeding in this case even of the conservative chief justice — has proven itself unmoored from the rule of law, and therefore unworthy of the public esteem that can be its only source of enduring authority.

With the vote of five justices to overrule Roe v. Wade and Planned Parenthood of Southeastern Pennsylvania v. Casey, American women have lost a right that was guaranteed them for a half-century, an unprecedented elimination of an individual freedom.

Justice Samuel A. Alito Jr., writing for the majority in Dobbs. v. Jackson Women’s Health Organization, trumpeted the overruling as a way to “return the issue of abortion to the people’s elected representatives.” That is precisely the problem. Deciding whether to continue with an unwanted pregnancy is an intimate moral choice — one that should be left to the individual who would be forced to carry the pregnancy to term, not to the whims of the government in whatever state they happen to live.

The three liberal justices, in a joint dissent, powerfully underscored the implications of the court’s action. “Whatever the exact scope of the coming laws, one result of today’s decision is certain: the curtailment of women’s rights, and of their status as free and equal citizens,” they wrote. “Yesterday, the Constitution guaranteed that a woman confronted with an unplanned pregnancy could (within reasonable limits) make her own decision about whether to bear a child, with all the life-transforming consequences that act involves. … But no longer. As of today, this Court holds, a State can always force a woman to give birth, prohibiting even the earliest abortions.”

The existing landscape of abortion rights is far different in 2022 than it was in 1973, when Roe was decided. In many antiabortion states, the court’s ruling will make an already difficult situation — with practical and legal barriers to abortion access — that much worse. But the emergence of medication abortions — the method in 54 percent of cases — means the risks to women’s lives and health will be less than they were in the years before Roe. The mailbox will become the new back alley. With educational outreach and funding, many women would be able to obtain these drugs.

None of that is to diminish the outrage of the court’s action and the ugly underlying reality: The critical thing that has changed is the composition of the court itself. “The majority has overruled Roe and Casey for one and only one reason: because it has always despised them, and now it has the votes to discard them,” the dissenters assert. “The majority thereby substitutes a rule by judges for the rule of law.” That is an astonishing indictment of their conservative colleagues, but it is fully justified.

Seven justices — including five nominated by Republican presidents — found in 1973 that the Constitution protects a woman’s right to choose. Five justices — all nominated by Republican presidents — refused 19 years later, in Casey, to jettison that right. “Neither law nor facts nor attitudes have provided any new reasons to reach a different result than Roe and Casey did,” the dissenters, Stephen G. Breyer, Sonia Sotomayor and Elena Kagan, write. “All that has changed is this Court.”

There is no better proof of the radical nature of the majority’s actions than the concurring opinion by Chief Justice John G. Roberts Jr. The chief justice voted to uphold the Mississippi law — but said there wasn’t a need to overrule Roe and Casey to do so, just to determine that states did not have to wait all the way until the point of fetal viability to prohibit abortion. As an intellectual exercise, his argument isn’t entirely convincing, but as a matter of judicial prudence — don’t decide more than is necessary — it is wise.

Roberts used more temperate language about his conservative colleagues than did the dissenters. The ruling delivered “a serious jolt to the legal system.” A “narrower decision” would be “markedly less unsettling.” Still, his message was unmistakable: These are restless justices, not to be dissuaded from their mission.

Will they stop at abortion? The majority forswears any interest in going after other rights similarly grounded in the right to privacy. “Nothing in this opinion should be understood to cast doubt on precedents that do not concern abortion,” it insists, arguing that abortion presents a distinct case because of the “destruction” of “potential life.”

This would be more convincing if Alito, the author of the opinion, hadn’t joined Thomas in a statement just two years ago lamenting that the same-sex marriage ruling, Obergefell v. Hodges, had supplanted states’ ability to address the issue, much as he says about abortion. And the court’s insistence that the Constitution only protects rights that are “deeply rooted in history” would apply with equal force to contraception or same-sex marriage. “Either the mass of the majority’s opinion is hypocrisy or additional constitutional rights are under threat,” the dissent says. “It is one or the other.”

My guess is hypocrisy. But who knows what this majority is capable of. Every day its radicalism reveals itself.