They wanted rule of law, so China tried them in secret 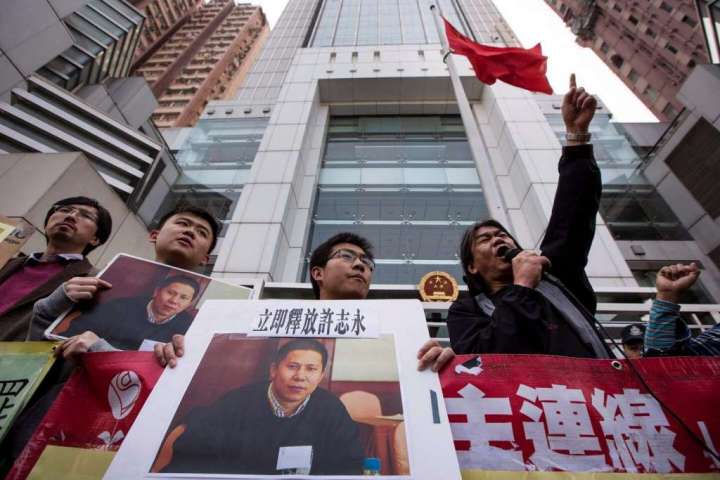 Two prominent Chinese advocates for citizen rights and the rule of law in China were tried for subversion this week in what family members said was an opaque legal process designed to conceal from people the plight of the country’s human rights defenders.

Xu Zhiyong, a founding figure of the New Citizen’s Movement that called for constitutionalism in China, and Ding Jiaxi, another leading figure in the movement, stood trial on Wednesday and Friday, respectively, in eastern China’s Linshu county, according to relatives and supporters.

The two were accused of running an illegal organization with the intent to overthrow China’s political system. Actions cited as evidence in an indictment from August 2021 included filming an illegal documentary, organizing training sessions on nonviolence, and holding “secret meetings” in the cities of Yantai and Xiamen.

33 years after Tiananmen, China crushes movements before they can start

Luo Shengchun, Ding’s wife who now lives in the United States, described the process as having taken place in “pitch darkness.” Her husband’s lawyers said they could not provide her additional information about the case. Supporters who tried to attend the trial were thrown out of their hotel rooms in the middle of the night. All Luo received was a text message informing her that the hearing was taking place.

“It’s getting ever worse,” she said in an interview. “The power of defense lawyers has been stripped to zero, and every step of the way they must sign a nondisclosure agreement. Even calling this case a state secret has no legal basis, because all they did was organize two private gatherings. Yes, they talked about human rights, but that should be allowed under freedom of speech.”

Neither China’s Justice Ministry nor the courthouse where the trials took place responded to requests for comment.

Under the decade-long tenure of Chinese President Xi Jinping, intolerance for human rights advocacy has grown to the point where even private events can lead to harsh punishment, and these cases, often deemed to touch on national security, increasingly take place almost entirely behind closed doors.

Renewed Chinese Communist Party control over the legal system also means attorneys who hope to defend activists must battle for basic rights like meetings with their clients or being able to review case files.

Even in 2015, when Chinese law enforcement launched a nationwide crackdown on human rights advocates, detainees were able to disclose some details of proceedings through their lawyers or relatives, but such advocacy is no longer possible, said Wang Yu, a Beijing-based rights lawyer who was detained during that roundup.

“There is no public attention, their families can’t protest, [and] their lawyers can’t mount a good defense,” she said. “How are you going to deliver a fair verdict on this case? It’s just impossible.”

Before Xi, the movement led by Xu appeared to be gaining limited but significant traction. In 2003, Xu was a rare independent candidate elected to Beijing’s Haidian District People’s Congress. Over the next decade, his advocacy on equal education rights and civil participation drew Chinese media attention — and increasing official scrutiny.

In 2014, after a campaign calling for officials to disclose their wealth, Xu and Ding were both jailed on charges of gathering a crowd to disrupt public order. At the time, Xu’s trial drew widespread attention, including in Chinese media.

In contrast, the hearing on Wednesday proceeded in almost complete silence. His lawyers, under threat of disbarment, were unable to speak to the press. Calls from fellow Chinese human rights lawyers for Xu’s and Ding’s trials to be open to the public were ignored. The courthouse did not release any statements about the hearings.

After his release in 2017, Xu kept a low profile. For a year, he wrote a history of the “citizen’s movement” and his ideas, which was published on his blog in 24 chapters. Slowly and quietly, he began to meet with other activists. Together with Ding, he organized two casual gatherings, including one in the southern seaside city of Xiamen in December 2019.

That meeting sparked a nationwide hunt for Xu and his colleagues. After weeks on the run, Xu was eventually captured in February 2020, in the southern city of Guangzhou, where he had been in hiding at a friend’s home.

Likely adding to the case against Xu is a letter he addressed to Xi that he published while on the lam, in which he said that Xi, China’s most powerful leader since Mao Zedong, was “not smart enough” to govern and called for him to step down.

“Of course, it’s easy for anyone who surrounds themselves with sycophants to develop an exaggerated sense of themselves. That’s made all the worse by a system that censors discordant views and leaves room only for fawning approval. There are no voices that dare to disagree,” Xu wrote.

As Xi’s tenure lengthens, the crackdown on Chinese rights lawyers and activists has shown no sign of slowing. More severe charges for similar advocacy have meant harsher punishments, leaving family members increasingly concerned for the health of their imprisoned loved ones. These fears are often worsened by the continued secrecy even after sentences are handed down.

One such case is that of anti-discrimination activist Cheng Yuan, who was jailed in 2020 for subversion. Shi Minglei, Cheng’s wife, said she fears that her slender husband will be unable to withstand the physical labor common in Chinese prisons.

“Since he was transferred to a new prison, his letters stopped and he isn’t allowed to make phone calls,” she said in an phone interview from her home in the United States. Like in the cases of Xu and Ding, Shi has been barred from seeing any of the court documents relating to her husband’s trial, which are classified as a state secret. “We ask for an explanation but are always told ‘there is no reason — you just can’t see it.’ The whole trial process took place inside a black box.”