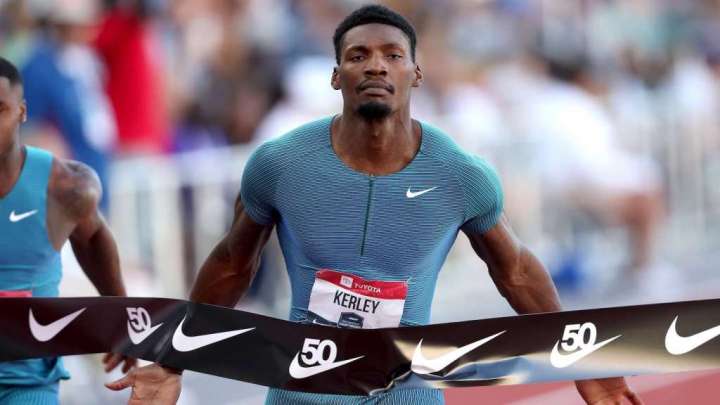 Fred Kerley spread his arms out wide and stuck out his tongue as he floated down the front stretch, all alone, nobody close to him. He had spent the past year defying those who doubted him, validating — and then surpassing — performances that had once been surprises. In less than 10 seconds, Kerley had obliterated any remaining doubt about who is the fastest man in America, if not the entire world.

At the U.S. track and field championships in Eugene, Ore., Kerley claimed the national title in the 100 meters, established himself as the favorite in next month’s world championships and became one of the fastest men in American history. Kerley won the final in 9.77 seconds despite a subpar start, about 90 minutes after he had detonated a semifinal heat in 9.76 seconds, fastest in the world this year and a time only two American men — Tyson Gay and Justin Gatlin — have topped.

As Kerley affirmed the full arrival of a new leading man in American men’s sprinting, the women’s 100 meters provided a shock for the second consecutive day. One night after favorite Sha’Carri Richardson failed to escape the preliminary round, collegiate sprinter Melissa Jefferson out of Coastal Carolina, who two weeks ago finished eighth at the NCAA Championships, pulled an upset in 10.69 seconds, an astonishing time that will not count in record books because of a plus-2.9 tail wind.

Kerley won bronze in the 400 meters at the 2019 world championships, and track adherents pegged him as an Olympic medal contender in the event — and then he stopped running it. At the urging of his coach and to much criticism within track circles, Kerley dropped down to short sprints at the start of 2021. He validated his choice in Tokyo, winning the silver medal in 9.84 seconds, missing gold by four-hundredths of a second.

In the past year, Kerley has only strengthened his hold on the marquee event. Hugely muscled and towering over his competitors, Kerley powers down the track like a runaway truck, his violent strides building one on another.

Kerley revealed his form and intentions in Thursday’s opening round, dusting his heat in 9.83 seconds — a personal best and the fastest time in the world this year — even as he cruised at the finish. He separated in his semifinal race, too, crossing with the benefit of a strong-but-legal tail wind.

In the final, Kerley broke behind the pack, a departure from the explosive starts from his previous two races. But he chewed up the track, pulled even with Trayvon Bromell, the winner at the U.S. trials last summer, and then pulled away from everybody. Marvin Bracy-Williams nipped Bromell for second in 9.85, but Bromell qualified for next month’s world championships with a third-place finish (9.88), giving himself an chance to redeem his performance in Tokyo, where he failed to make even the semifinals.

“I got another opportunity, man,” Bromell said in an on-track interview.

Coleman missed the Tokyo Olympics while serving a one-year ban for missing three drug tests in a calendar year, even though the Athletics Integrity Unit stated it found no evidence Coleman used performance-enhancing drugs. Coleman called this year “a learning process getting back into the art of sprinting.” He has yet to regain the form that made him a world champion and, at 9.76 seconds, the seventh-fastest man ever. But he believes he can by next month.

“I’m the same guy,” Coleman said. “I feel it’s there. If you have a long layoff, obviously it’s going to affect you in some kind of way. This whole season for me is a learning experience. But I feel like that same guy is still in me. I just got to pull it out.”

The women’s 100, at first, was defined by who wasn’t there. Richardson finished fifth in her Thursday heat in 11.31 seconds and didn’t make it out of the opening round. Two weeks earlier, she had finished second in 10.85 seconds at the NYC Grand Prix. She will attempt to make the world championships this weekend in the 200 meters.

Richardson was not alone in surprising. Neither Teahna Daniels nor Jenna Prandini, both Tokyo Olympians in the 100 meters last summer, reached the final.

Aleia Hobbs, the 2018 national champion, entered as the favorite. She came out of the blocks slow but gradually pulled to the front. In the final 30 meters, as Hobbs appeared ready to nudge into the front, Jefferson surged ahead and maintained the lead. She broke the tape with a lean. When she realized she had won, Jefferson’s eyes bulged and her mouth opened wide.

“Two weeks ago, I knew the biggest thing I had to work on was focusing on my lane and focusing on my race and trust in what I’ve been doing,” Jefferson said. “Today, I just had a clear mind and just ran.”

Hobbs still finished second, just in front of Twanisha Terry, and made her first national team as an individual. At the U.S. Olympic trials last summer, Hobbs endured a devastating series of events. Race officials ruled Hobbs had false started in her semifinal, a controversial decision that left Hobbs broken and confused. She was crying in the corner of Hayward Field when her coach informed her, minutes before the final, that the ruling had been reversed. Hobbs rushed to the start line with her blocks. Frazzled, Hobbs finished seventh and missed an Olympic qualifying spot.

Hobbs ended up making it to Tokyo as part of the U.S. 4×100 relay pool, and she eventually sprinted for the team that won a silver medal. Now she will take on the dominant Jamaican trio of Elaine Thompson-Herah, Shelly-Ann Fraser-Pryce and Shericka Jackson on U.S. soil at the world championships.

“It’s an amazing feeling,” Hobbs said. “One of the best feelings.”

In the 400-meter hurdles, world record holder Sydney McLaughlin breezed to a semifinal victory in 52.89 seconds, the kind of race her dominance has rendered obsolete as a world-class time. Not long ago, breaking 53 seconds represented greatness in the event. On Friday night, McLaughlin trotted the final quarter of the race, even stutter-stepping before clearing the final hurdle.