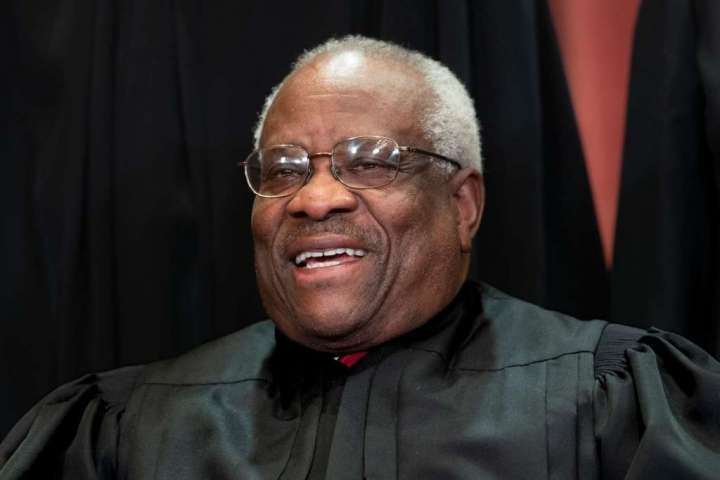 In an opinion concurring with his conservative colleagues on the Supreme Court to overturn the fundamental right to an abortion, Justice Clarence Thomas wrote on Friday that striking down Roe v. Wade should also open up the high court to review other precedents that may be deemed “demonstrably erroneous.”

Among those, Thomas wrote, was the right for married couples to buy and use contraception without government restriction, from the landmark 1965 ruling in Griswold v. Connecticut.

“In future cases, we should reconsider all of this Court’s substantive due process precedents, including Griswold, Lawrence, and Obergefell,” Thomas wrote on Page 119 of the opinion in Dobbs v. Jackson Women’s Health, also referring to the rulings that legalized same-sex relationships and marriage equality, respectively. “Because any substantive due process decision is ‘demonstrably erroneous’ … we have a duty to ‘correct the error’ established in those precedents.”

Thomas added, “After overruling these demonstrably erroneous decisions, the question would remain whether other constitutional provisions guarantee the myriad rights that our substantive due process cases have generated.”

As SCOTUS overturns Roe today, Justice Clarence Thomas’s concurrence lays out other rights enshrined in settled case law that he says the high court should “reconsider.”

Following Friday’s culture-shaking opinion in Dobbs, health advocates, legal experts and Democrats are wondering whether the Supreme Court’s conservative majority could eye the right to contraception in the future. The Griswold case is mentioned or cited nearly two dozen times in the Dobbs ruling, which was widely celebrated by Republicans and the antiabortion movement.

The five other conservative justices who joined in the decision, however, explicitly tried to reassure in their opinion that those other rights will not be targeted. The opinion by the dissenting justice “suggests that our decision calls into question Griswold, Eisenstadt, Lawrence, and Obergefell. … But we have stated unequivocally that “[n]othing in this opinion should be understood to cast doubt on precedents that do not concern abortion,” they wrote.

In an address to the nation, President Biden denounced Thomas’s explicit focus on the right of couples to make their own choices on contraception — “a married couple in the privacy of their bedroom, for God’s sake.”

“This is an extreme and dangerous path the court is now taking us on,” Biden said.

Audrey Sandusky, the National Family Planning and Reproductive Health Association’s senior policy and communications director, told The Washington Post that the opinion shows there is an “appetite among at least some on the Court to dismantle a whole landscape of rights, including the right to access contraception and the fundamental right to privacy.”

Pointing to instances when states have deemed certain contraceptive methods as abortifacients, or substances that can induce abortions, Sandusky said the court’s decision will embolden more of those kinds of state policies.

“Today’s ruling throws chaos into reproductive health and rights in this country at a time when the family planning provider network is already stretched far too thin and is in dire need of more support,” she wrote in an email.

The interest around Griswold stems from how the constitutional protections for abortion and birth control have long been linked. In Griswold, the Supreme Court invalidated a law prohibiting birth control, arguing that the prohibition violated a fundamental “right to privacy.” This right to privacy was the foundation for Roe v. Wade.

“Would we allow the police to search the sacred precincts of marital bedrooms for telltale signs of the use of contraceptives?” Justice William O. Douglas wrote for the majority on June 7, 1965. “The very idea is repulsive to the notions of privacy surrounding the marriage relationship.”

But the precedent on contraception has come up decades later with the justices on today’s Supreme Court. During her confirmation hearing in 2020, Amy Coney Barrett declined to answer whether Griswold was decided correctly, on the grounds that a full ban on contraception at the state level was “unthinkable.” The case came up again from Justice Sonia Sotomayor during oral arguments for Dobbs, which looked at a Mississippi law that would ban almost all abortions after 15 weeks of pregnancy.

“In Roe, the court said … that there are certain personal decisions that belong to individuals and the states can’t intrude on them,” the liberal justice said at the time. “We have recognized that sense of privacy in people’s choices about whether to use contraception or not.”

If the Supreme Court undermines Roe v. Wade, contraception could be banned

Since a draft opinion of the Dobbs case was leaked last month, several Republican lawmakers have signaled their willingness to restrict emergency contraception in addition to abortion, a subject legislators have rarely discussed in public. In March, Sen. Marsha Blackburn (R-Tenn.) called the Griswold decision “constitutionally unsound.” In May, Mississippi Gov. Tate Reeves (R) refused to rule out the possibility that his state would ban certain forms of contraception. Blake Masters, a GOP Senate candidate in Arizona, had said on his website that he would “vote only for federal judges who understand that Roe and Griswold and Casey were wrongly decided.”

“The Supreme Court is a different branch of government. They can look at whatever comes before them,” McCarthy said. “I just know what we are doing, and what we have today is that life matters.”

When he was asked again, he repeated, “The Supreme Court is a separate branch of government; they take their positions.”

McCarthy refuses to answer a question about if he would support SCOTUS revisiting gay marriage and contraception, saying it’s “a different branch of government” pic.twitter.com/ipkAjUStIs

“Here’s how you can bring this litigation and claim that this was decided wrongly,” she added.

Sobel said that there is a possibility that litigation may come, such as if a state were to ban IUDs or contraception and someone sued.

Critics decried Thomas for saying precedents like contraception should be reviewed by the Supreme Court, despite being established law for decades.

“It does not end at abortion,” wrote Rahna Epting, the executive director of the liberal group MoveOn. “Republicans will not stop until they have stripped away every freedom they can’t load with bullets.”

Some legal experts say they saw this ripple effect coming if Roe was ever defeated. It was inevitable that the decision overruling Roe would open to the door to the reconsideration of precedents, said Stephen Vladeck, a professor at the University of Texas Law School. But now that the justices aren’t as hesitant to overrule precedent and GOP state leaders are more willing to push the envelope, it is possible Griswold could be headed toward a reversal.