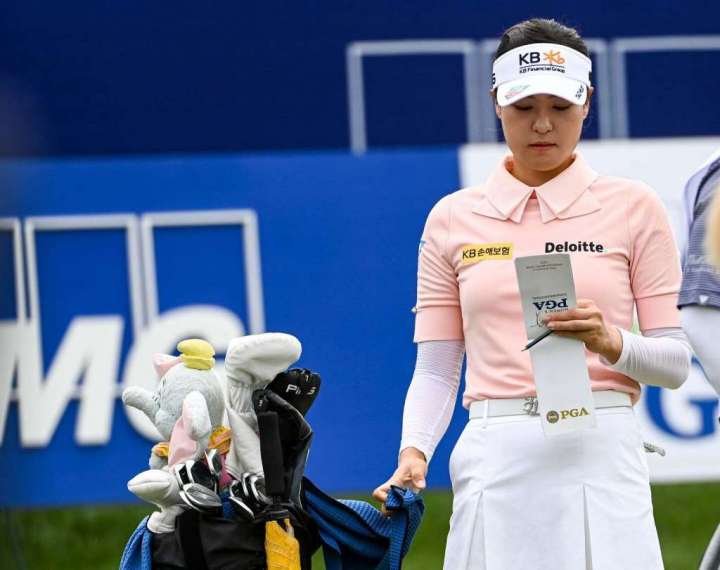 The commotion around the green began to unfold when American Lexi Thompson, gap wedge in hand, landed her approach to the par-4 17th roughly five yards beyond the hole, eliciting modest applause for a player few, if any, on the LPGA Tour can match when it comes to ball-striking and distance control.

Then the murmurs grew louder, eventually turning into outright shouts of disbelief and exuberance as the ball drifted back toward the flagstick, gaining velocity until it disappeared into the cup for an eagle. Thompson wasn’t able to witness the ball dropping from her position on the fairway, but she heard the roar reverberate throughout the grounds at Congressional Country Club.

It was the highlight of the second round at the Women’s PGA Championship — and it still left the world’s sixth-ranked player with plenty of work to do in pursuit of leader In Gee Chun.

Thompson’s eagle was the springboard for a 67, tied for the low round on the day. Yet Thompson, at 3 under, will enter the weekend trailing Chun by eight strokes. Chun, who followed a stunning first-round 64 with a cool 69, is six shots clear of closest pursuers Lydia Ko of New Zealand and American Jennifer Kupcho.

“Honestly, before I started today, I felt a little pressure for sure after I had a great first round,” Chun said. “Now I am in a good position. Expectation is really high. It was a little tough to focus. I believe it’s another process in my life. I want to see the big picture and enjoy the next two days.”

Thompson at least enters the weekend with a glimmer in the third major of the year and the first women’s major championship contested at this storied property in Bethesda.

“I’m comfortable to be sure,” said Thompson, a fan favorite. “Today went really well. … I just came in today with a positive attitude. And same going into the weekend; if I go out and play like I did today, just solid and committing to my shots in the process of my routine, we’ll see where it takes me.”

Thompson, 27, shot seven strokes better than her opening round as she seeks a second major championship and first since the 2014 Kraft Nabisco Championship. Her best finish at the Women’s PGA Championship was third in 2015 at Westchester Country Club in Harrison, N.Y.

Thompson, an 11-time winner on the LPGA Tour, also is bidding to end the longest winless drought of her career. She last won at the 2019 ShopRite LPGA Classic.

“If I have a bad day, it’s not the end of the world,” Thompson said after a round that included a divot improbably landing down her shirt from the fairway at No. 16. “Still a blessing just to be even out here.”

Ko, meanwhile, matched Thompson’s round thanks in large part to amassing five birdies on her front side and saving par at the 18th, statistically the most difficult hole this week, with a pitch from the tall grass hugging the fairway that settled within a foot of the pin for a tap-in 4.

The best finish for Ko at the Women’s PGA was a second in 2016 at Sahalee Country Club in Sammamish, Wash.

“I feel like the game is in a pretty solid place,” Ko said. “At the same time, it’s very difficult to win. The level of play on the tour is incredible. You can see by the scores week in and week out.”

Ko, 25, had been winning with regularity, often with ease belying her youth, not long after she turned professional in 2013. From 2014 through 2016 she claimed a dozen triumphs, including both of her majors, but she has won only three times since, including in January at the LPGA at Boca Rio in Boca Raton, Fla.

Ko became the youngest player, male or female, to reach No. 1 when she did so in 2015 at 17 years 9 months 9 days. She has flirted with victories over her five most recent events, finishing in the top five four times, including fifth at the U.S. Women’s Open at Pine Needles in Southern Pines, N.C.

“When things are going well, everything looks good,” Ko said. “But I think the important thing is for me to realize that sometimes I’m not — most of the time — I’m not going to have a perfect round.”

Chun came as close to that as anyone on tour Thursday morning, taming the 6,894-yard layout that was playing even longer with two-plus inches of rain that fell overnight. The South Korea-born two-time major champion wasn’t as sharp in the second round after she opened with three birdies in five holes.

She made consecutive bogeys at Nos. 7 and 8, where she hit into a greenside bunker, splashed out back into the fairway and chipped to just inside the fringe. She then missed a lengthy putt for par.

But she regrouped on the back nine, bookending it with birdies on Nos. 10 and 18 to enter the weekend in command. Among those chasing are Americans Caroline Inglis and Jennifer Chang as well as Canadian Brooke Henderson, ranked eighth in the world.

“You know, it’s a major championship, and anything can happen, and it’s only halfway,” said Henderson, who is tied for fourth at 4 under. “Like I said, I think I’ll have to play extremely well and make a lot of birdies and put myself in a good position on Sunday.”