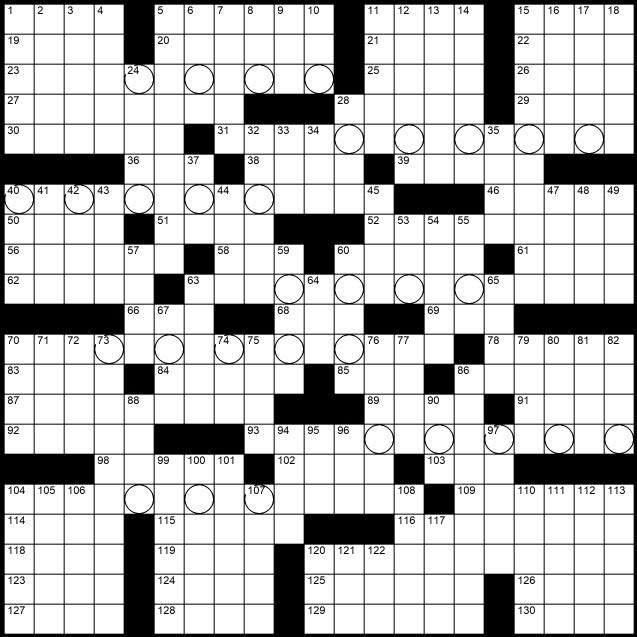 Today’s puzzle features phrases where, if you jump from one circled letter to the next, you’ll spell out a type of house.

The revealer is at 120A: [Party rental that may make you jump for joy … and a hint to this puzzle’s circled words] which is BOUNCE HOUSE.

Something I relearned the hard way while making this puzzle is that finding phrases with appropriate alternating letters becomes very limiting very fast the longer your target word is. There’s only a small number of house types that can work for a theme like this, and anything above five letters (like A-FRAME, PALACE, and MANSION) won’t yield many answers at all. Even some five-letter house types like DACHA and MANOR and VILLA came up empty in my search.

Some other answers and clues:

Speaking of clue angles that I found funny, I need a few paragraphs for 34D: [“Desert ___” (satirical video game conceived by Penn and Teller involving a drive from Tucson to Las Vegas)] which is BUS. Here’s a brief description of “Desert Bus”: You drive a bus from Tucson to Las Vegas, and that’s basically it. It takes eight hours of real time to complete the drive, you can’t pause the game and the bus constantly drifts to the right, so you can’t just let go of the controller and let the game run. If you do, the bus comes to a stop in a ditch and you get towed back to the beginning … which *also* takes the same amount of real time for the tow truck to complete its journey back. Pretty much nothing happens the entire time except for an occasional bug splattering on the windshield, and if you finish the drive, you get one point. You then have the option of making the return trip from Las Vegas to Tucson, which would take another eight hours and your reward for doing it would be, yet again, one measly point. You can watch a (thankfully) brief review of the game here and read a longer New Yorker review of it here.

Penn and Teller thought of the concept in the mid-1990s in response to politicians who complained about violence in video games, so they wanted to create the world’s most boring game as a satire — because if there’s one thing that would actually drive you to madness while playing a video game, it would be simulating the real-life experience of driving a bus for eight hours while nothing else happens. “Desert Bus” (and the Sega CD game it was included on, “Penn & Teller’s ‘Smoke and Mirrors’”) was never released to the public, but found its way into internet lore when someone got a hold of a copy. It’s even become a game that the sketch comedy group LoadingReadyRun plays for charity, where people rotate in and out over several days to complete as many “Desert Bus” runs as possible while streaming it for fans online. I can hardly imagine just how much commitment it must take to play a game this boring for that long, but since 2007 they’ve raised millions for Child’s Play, an organization that donates toys to children’s hospitals.

Anyhow, I’ve wanted to use this clue for BUS for a while, and from early 2020 to mid-2022, that answer never even showed up in one of my grids … until the Downs-only “It’s the Only Way” puzzle in April, and that clue felt too out-there for a Downs-only challenge when I wanted every clue to be really easy. Good thing I got another opportunity so soon.

That’s enough about “Desert Bus,” so here’s a heads-up about next week’s puzzle: It’s big (23×23 squares) and it has a meta. Set aside a little bit of extra time for solving it. I hope you enjoy it whether you crack the meta or not.

What did you think?

My teen says they’re nonbinary. How do we know it isn’t a phase?

Carolyn Hax: Mother-in-law insists they’re moving away because they ‘hate’ her

Ask Amy: Now that I’m married, I miss living with my family

Miss Manners: Why do we call pets ‘babies’ and pet owners ‘parents’?