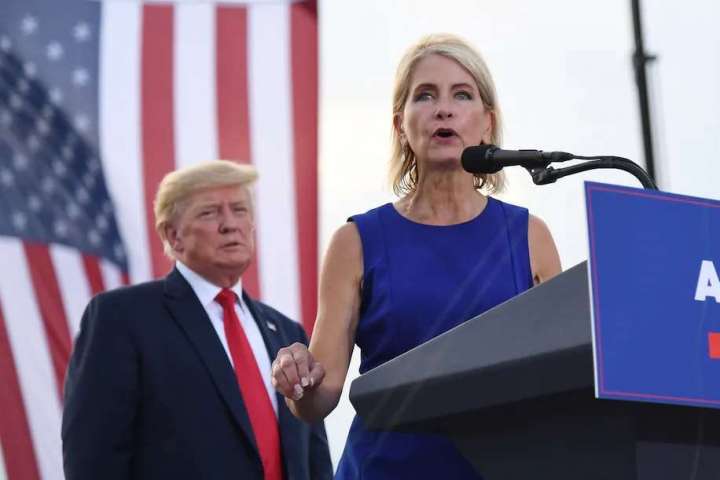 A Republican lawmaker called the Supreme Court’s decision to overturn the nationwide right to abortion established nearly 50 years ago in Roe v. Wade a “victory for white life,” which was met with cheers at a rally held by former president Donald Trump.

“President Trump, on behalf of all the MAGA patriots in America, I want to thank you for the historic victory for white life in the Supreme Court yesterday,” Rep. Mary E. Miller (R) said at the rally Saturday night in Mendon, Ill., referring to Trump’s former campaign slogan, “Make America Great Again.”

She began clapping her hands as spectators, some clutching red “Save America” placards, also began to applaud.

Her remark drew widespread condemnation on social media, and Miller’s team swiftly issued an explanation for what it deemed to be “a mix-up of words.”

Abortion will soon be banned in 13 states. Here’s which could be next.

Miller’s spokesman, Isaiah Wartman, told the Associated Press that the Illinois Republican misread her prepared speech and was supposed to declare the divisive court ruling a victory for the “right to life.”

Trump — who has endorsed Miller against GOP Rep. Rodney Davis after Democrats redistricted them into competing for a single seat — was hosting the rally ahead of the state’s hotly contested primary on Tuesday.

An Illinois race turns into battle over GOP response to Jan. 6

The words “white life” became a top trend on Twitter in the United States.

Republican Congresswoman Mary Miller, to Trump: “I want to thank you for the historic victory for white life in the Supreme Court yesterday.”

Make sure everyone sees this.
pic.twitter.com/BkV28QQK6z

“I am retweeting this statement by GOP Rep Mary Miller about white life for your information,” wrote Rep. Ted Lieu (D-Calif.).

Others pointed out that many in the crowd seemed unfazed by Miller’s comment. “Whether it was a slip or not, the audience heard ‘white life’ and didn’t flinch. They applauded,” tweeted columnist Ahmed Baba, who writes for the Independent.

Madeleine Albright warned before her death about the rising Fascism in the US. Never assume liberal democracy is the default, that progress won is in the bank and doesn’t need constant forceful protection. https://t.co/6Kc0eaLWte

On Friday, Miller hailed the high court’s decision as “a joyous victory.” She said Roe v. Wade had “done untold damage to our country,” and she accused the “cruel abortion industry” of deceiving Americans. She thanked Trump for helping to overturn Roe by “appointing Supreme Court justices who value life.”

Trump, who to promised to appoint anti-Roe justices, nominated Neil M. Gorsuch, Brett M. Kavanaugh and Amy Coney Barrett, who were all part of the 5-to-4 vote to overturn the 1973 ruling, along with Justices Samuel A. Alito Jr. and Clarence Thomas.

This is not the first time Miller has been scrutinized for comments in her speeches. Last year, she was forced to apologize after quoting Adolf Hitler at a “Moms for America” event in Washington.

“Hitler was right on one thing. He said, ‘Whoever has the youth has the future,’” Miller said during the rally. Her remark, just two days after she was sworn in as a House member, led to calls for her resignation on social media and from Democrats.

“I sincerely apologize for any harm my words caused and regret using a reference to one of the most evil dictators in history to illustrate the dangers that outside influences can have on our youth,” she said.

‘Three percenters’ truck at Capitol belongs to husband of congresswoman who said, ‘Hitler was right on one thing’