Rudy Giuliani gets caught in another lie — at a supermarket 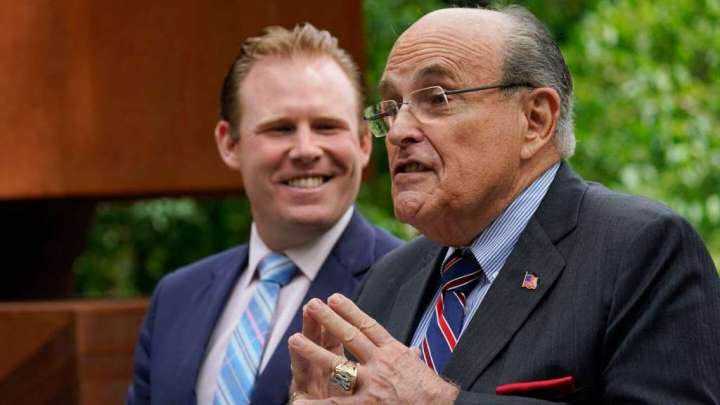 Not for the first time, Americans face a conundrum over whom to believe: Rudy Giuliani, or their own lying eyes?

The former mayor and current election-lie propagator, campaigning Sunday in a Staten Island ShopRite supermarket for his son, Andrew Giuliani, in his New York gubernatorial bid, was chatting with a small group of shoppers when a worker approached him from behind and gave him a clap on the back.

Surveillance footage showed the backslap — more than a pat but less than a shove — apparently startling but not harming the 78-year-old leader of the effort to overturn the 2020 election. The employee appeared to direct some words at Giuliani — witnesses quoted him as saying, “Hey, what’s up, scumbag?” — and the video ended with security leading the man out of the picture and Giuliani pointing an index finger at him.

Let us stipulate, right away, that violence is unacceptable, and that the worker, said by Giuliani to be upset by Giuliani’s antiabortion views, should face whatever legal consequences may come. (He was arraigned Monday on misdemeanor charges over what his lawyer called a “tap.”) And yet the supermarket shenanigans, as captured in the video, resemble not in the slightest the preposterous tale of criminal brutality that Giuliani turned them into.

How the mighty have fallen! The progenitor of the “big lie,” stripped of his law license for that, is now fibbing in the produce aisle — and stocking up on embellishments about the backslap as if it were double-coupon day.

Sunday, he said he felt as if “somebody shot me” and “I just about fell down,” whereupon he would have “probably cracked my skull.”

At 7 a.m. Monday, Giuliani reported that “I got hit on the back as if a boulder hit me. It knocked me forward a step or two … It hurt tremendously.” In an online news conference, he fancied himself the victim of “some criminal banging you on the back … as hard as he could” and announced that “I’m going to go see a doctor later. It was painful all night.”

Four hours later, Giuliani held another online news conference, this time alleging he was “hit so hard” the blow almost toppled the woman standing next to him. (The woman, he claimed, had asked to examine the injury and “sort of massaged it and said that was a terrible blow.”)

The video, however, showed Giuliani in no danger of toppling from the backslap. Informed that authorities were downgrading the charges and releasing the worker, Giuliani declared that New York had become “the wild, wild West” and that the employee posed a grave risk to public safety. “I worry about this little punk for you, because if he can come and hit me, a 78-year-old man, next thing he does is gonna hit you,” Giuliani told his Facebook Live audience. “Between now and the next time we catch him, who knows how many more people he is going to hit,” Giuliani warned. (The worker had no prior criminal record.)

Giuliani was conscious of the gap between his version of events and the one shown in the video, for he claimed that the video was “deceptive” and amounted to just “the little bit shown to you by the dishonest press.” (Actually, the 30-second security video, which showed before, during and after the slap, was first obtained by the Giuliani-friendly New York Post.)

Giuliani, raspy voiced, wild-eyed, prone to rambling asides and struggling with his webcam, might have been on firmer ground if he had said the slap had knocked the sense out of him. Then again, he didn’t make much sense before the supermarket contretemps, as the House Jan. 6 select committee has made clear, with testimony about his election-night drinking and his bogus claims of votes in garbage cans, shopping carts and suitcases.

We may never understand what makes a man like Giuliani tell a lie when it can be so easily disproved. Maybe he thought it would help his son’s gubernatorial bid. Maybe he believed it would help efforts underway by Republican Party officials to tar the left for violence after the Supreme Court’s overturning of Roe v. Wade. Or maybe he can no longer tell the difference between fact and fiction.

“I said, let’s get him arrested, let’s make an example out of him,” Giuliani said of his reaction to the slap. Instead, he made another example of himself: a man so morally confused that even a trip to the supermarket means loading his cart with lies and conspiracies.