Here are the al-Qaeda and ISIS leaders killed in U.S. strikes or raids 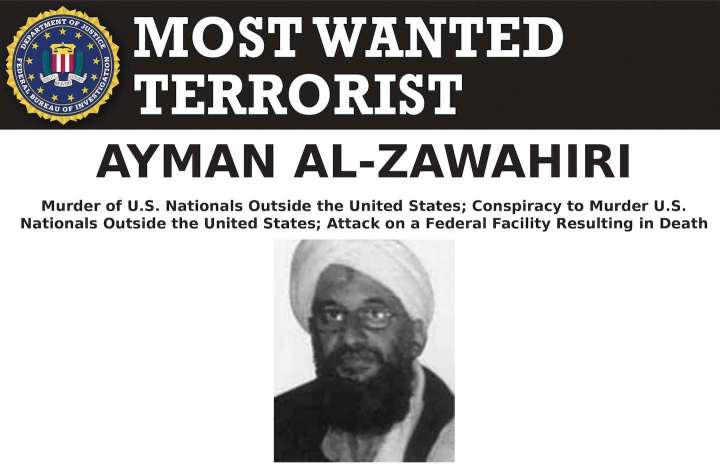 The United States killed al-Qaeda leader Ayman al-Zawahiri in a drone strike in Kabul over the weekend, President Biden said Monday. Zawahiri, 71, was one of the world’s most-wanted terrorists and, alongside al-Qaeda founder Osama bin Laden, oversaw the attacks of Sept. 11, 2001.

He was largely considered the brains behind the notorious terrorist group — pioneering a movement that prized spectacular attacks and the indiscriminate slaughter of civilians.

Both Zawahiri and bin Laden escaped U.S. forces deployed to Afghanistan in late 2001. Zawahiri’s whereabouts had remained a mystery, even after Bin Laden was killed in a raid by U.S. forces in Pakistan in 2011.

A loud blast was heard in the Afghan capital at 6:18 a.m. on Sunday. A spokesperson for the Taliban wrote in a tweet that an airstrike hit “a residential house” in the capital city and claimed it was “carried out by American drones.”

Biden said the U.S. intelligence community located Zawahiri earlier this year, when he moved to downtown Kabul to reunite with members of his family. The decision to strike was made a week ago, when Biden said he was advised by intelligence officials that conditions were “optimal.” None of Zawahiri’s family members was hurt, and there were no civilian casualties, Biden said.

The attack against Zawahiri is the first known counterterrorism strike there since the withdrawal of U.S. forces from Afghanistan last August. News of the operation drew bipartisan praise in the United States and celebration from some foreign governments. But some experts and rights advocates have previously questioned the ethics and efficacy of such operations.

Here’s a look at several past operations that targeted top Islamic State and al-Qaeda leaders.

The White House and U.S. military announced in July that Maher al-Agal, a key Islamic State figure who worked to build ISIS networks outside of Iraq and Syria, was killed in a U.S. drone strike in northwest Syria.

Operation officials said at the time the strike would undercut the group’s ability to plan and carry out attacks globally: Agal was considered to be one of the top five Islamic State leaders in Iraq and Syria.

He was one of two targets of the strike outside Jindires, about 35 miles northwest of Aleppo. A second individual closely associated with him, whom the military did not identify, was “seriously injured” in the strike.

Biden praised the development at the time, saying it “demonstrates that the United States does not require thousands of troops in combat missions to identify and eliminate threats to our country.”

Thirteen people died during the raid, including six children and four women, according to local first responders. Biden said at the time that there were no U.S. casualties.

The officials said the mission was planned for months. It took place as concerns mounted over the resurgence of the Islamic State and bore echoes of the U.S. operation in Idlib two years earlier that killed Abu Bakr al-Baghdadi, Qurayshi’s predecessor.

Who is the ISIS leader killed in the U.S. raid? Here’s what to know about Qurayshi and northern Syria.

President Donald Trump announced in October 2019 that Baghdadi, then the Islamic State’s commander, had died during a U.S. military operation in Syria.

Baghdadi, who assumed leadership of the Islamic State of Iraq in 2010, declared an Islamic caliphate in Iraq and Syria that at its peak controlled an area the size of Britain and inspired terrorist attacks around the world. The group is known for its brutal tactics and extreme interpretations of Islamic texts.

A U.S.-led military coalition drove the Islamic State from the last of its territory in March 2019 — but Baghdadi, who rarely appeared in public, remained at large.

ISIS fighters launched a brazen attack to free their comrades

In a nighttime operation on Oct. 26, 2019, helicopters carried a team of U.S. Special Operations troops into northwest Syria to launch an assault on a militant compound there. Baghdadi retreated into a “dead-end tunnel” and detonated an explosive vest, killing himself and three of his children, Trump said.

Trump boasted that Baghdadi “died like a dog.” News of the his death was welcomed by leaders across Europe and the Middle East.

Two U.S. service members were lightly wounded in the operation, officials said, and other militants were also killed, including two women said to be wives of Baghdadi who were wearing explosive vests.

The intent of the operation had been to capture Baghdadi, Defense Secretary Mark T. Esper told CNN at the time.

The mission came as Trump faced criticism for his decision to pull back most U.S. forces in northern Syria — a move seen by critics as a betrayal of Kurdish allies who had fought the Islamic State alongside Americans and provided intelligence for the operation.

Qurayshi took over as the Islamic State’s leader several days after the raid. A Pentagon report in February 2020 found that Baghdadi’s death had little impact on the group’s command structure or operations.

Hamza bin Laden, a son of al-Qaeda founder Osama bin Laden who some saw as a potential rising star in the terrorist network, was killed by U.S. forces in a counterterrorism operation in the Afghanistan-Pakistan region, Trump said in September 2019.

Trump did not offer additional details. Previous reports indicated that Hamza had died earlier, leaving uncertainty around the timing of the operation.

One of the al-Qaeda founder’s many children, Hamza was “responsible for planning and dealing with various terrorist groups,” Trump said in a statement, describing his death as a blow to the militant network’s leadership.

Trump later called Hamza “the heir apparent to al-Qaeda,” and terrorism experts described him as an appealing figure to younger militants as al-Qaeda competed with the Islamic State for recruits.

Some analysts, however, questioned Hamza’s influence in al-Qaeda. And the killing of senior al-Qaeda leaders in U.S. strikes in Yemen and Libya have had little impact in stemming the spread of the group’s ideology or reach.

When President Barack Obama took office in 2009, he instructed CIA Director Leon Panetta to make killing or capturing bin Laden — whose organization carried out the 9/11 terrorist attacks — a top priority.

On the night of May 1, 2011, Obama and senior officials watched from the White House Situation Room as Navy SEALs flew from Afghanistan to Abbottabad, Pakistan, to raid a compound where they believed bin Laden was hiding. The U.S. team killed bin Laden, 54, and took his body and a trove of papers and personal belongings.

“We got him,” Obama said when it became clear that bin Laden was dead, The Post reported that week.

Addressing the public after the operation, Obama called it “the most significant achievement to date in our nation’s effort to defeat al-Qaeda” and said the world was “a better place because of the death of Osama bin Laden.”

The Post later reported that the CIA had used stealth drone aircraft to monitor the compound. The discovery of bin Laden in Pakistan raised questions in the United States about Pakistan’s reliability as a counterterrorism ally. Pakistan’s prime minister called the U.S. assault “a violation of sovereignty.”

Polls shortly after the raid showed widespread approval of it by the American public, and U.S. allies praised the operation. Rights groups and some lawyers questioned whether the killing was legally and ethically justifiable, arguing that U.S. forces should have attempted to capture bin Laden alive and put him on trial.

The raid and decade-long hunt for bin Laden were dramatized in the 2012 film “Zero Dark Thirty.”

Obama said two days after the raid that the United States had photos of bin Laden’s body but would not release them, giving rise to conspiracy theories. Legal action to try to force their release since then have failed. Officials told reporters that bin Laden was buried at sea in line with Islamic tradition.

Six people were killed in the strike, including a woman and a child, military officials said.

The strike took place three years into the Iraq War, which the George W. Bush administration had started based on false claims that Iraq had weapons of mass destruction and that Iraqi leader Saddam Hussein was harboring al-Qaeda. Zarqawi, Bush administration officials incorrectly alleged, served as a link between al-Qaeda and Hussein’s government.

“Zarqawi’s death is a severe blow to al-Qaeda,” Bush said in a speech at the White House the following day. “It’s a victory in the global war on terror, and it is an opportunity for Iraq’s new government to turn the tide of this struggle.”

The Islamic State grew out of al-Qaeda’s Iraqi affiliate several years later and branded itself as a more ruthless alternative.