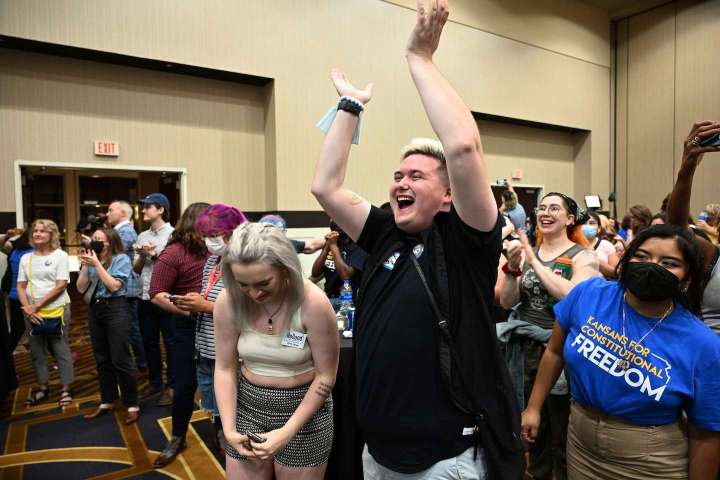 In the 1850s, political violence in the Kansas territory — “Bleeding Kansas” — was a warning that America’s democratic process was losing its ability to resolve the country’s foremost disagreement. On slavery, a patchwork of state-level settlements would not be viable for long. Either abolitionists or pro-slavery forces would need their vision codified unconditionally — and walled off from political movements in the states.

Kansas might again be a bellwether in a polarized country, but this time the lesson is less ominous. Its Tuesday abortion referendum suggests that the most divisive moral question of the 20th and 21st centuries — in which both sides seek to claim the mantle of 19th-century abolitionism — can be fought out democratically in the states.

For decades, American liberals — and the Supreme Court — held that the right to abortion was too fundamental to rest on the approval of popular majorities. On the other side, since the court’s June decision overturning Roe v. Wade, conservative interest has grown in national legislation that would ban abortion even in pro-choice states.

The Kansas plebiscite, which delivered a 59 percent to 41 percent pro-choice victory, calls both positions into question. The first post-Roe abortion referendum shows that the absolutist pro-life movement is a political minority, and that its prospects for codifying strict antiabortion laws in federal legislation are remote.

But it also undermines the pro-choice ideological premise that was the foundation of Roe: that states can’t be trusted to give abortion policy a fair hearing through a process of political give-and-take. America’s traditional model of democratic federalism has plenty of running room left.

To be sure, this referendum had some unusual characteristics. In 2015, Kansas’s Republican legislature passed, and the governor signed, a bill severely restricting second-trimester abortions. In 2019, the state’s Supreme Court, in an unwieldy 115-page decision, invalidated the law as a violation of the Kansas state constitution’s general liberty guarantee.

With Roe overturned, pro-life Kansans sought to set aside their state court’s decision, as well. They proposed a constitutional amendment that would, according to the explanatory statement on the ballot, “affirm there is no Kansas constitutional right to abortion” under any circumstances.

This tangled backdrop to the referendum forced voters to navigate double negatives, and the campaign may offer lessons for how each side can frame the issue to its advantage in future elections. Yet Kansans turned out in droves to decisively reject the amendment, with several Republican counties falling well short of majority support for the pro-life position.

Only 16 states have a stronger Republican lean than Kansas, according to the Cook Political Report index. No matter the peculiarities of this referendum, it’s hard to square the nearly 18-point pro-choice margin in Kansas with the prospect that 51 Republican senators — representing more than 25 states — would vote to ban abortion in all 50 states and stay in office for long.

If the GOP wins both houses of Congress and the presidency in 2024, strict pro-life bills will surely be introduced. But even if they passed the House, a handful of pro-life Republican senators could allow them to be blocked by a Democratic filibuster (that supposedly “anti-democratic” Senate rule can sometimes steer policy in a more popular direction).

Kansas is now an outlier among solidly red states, many of which either ban or will soon ban most abortions, including under “trigger laws” crafted while Roe was still in effect. How to explain those laws in light of the registered popular sentiment in Kansas? Part of the answer might have to do with gerrymandering or the incentives created by partisan legislative primaries, as opposed to popular referendums.

But many state legislatures passed their pro-life statutes when the issue was purely notional, because abortion remained a federal constitutional right. Legislatures will be forced to hew more closely to the opinions of their voters if the laws they pass are immediately binding. That doesn’t mean strongly pro-life legislation won’t continue to go into effect: Indiana’s GOP legislature is moving ahead with such a bill, though voters have not yet had a chance to intervene in a legislative election.

It’s a military maxim that the important aim of a conflict is not so much to defeat the adversary but to convince him he is defeated. Bleeding Kansas was the prelude to a terrible war because neither side of the conflict over slavery could ever be convinced politically of its defeat. Since the 1973 decision in Roe, liberals have “won” the abortion debate. But far from convincing conservatives they had lost, the judicial mandate made the fight appear all the more important.

In most states, the political process is unlikely to produce an abortion regime as expansive as the one maintained by the Supreme Court for 49 years. But abortion rights that do exist will rest on a more legitimate foundation. It’s popular to warn of political fracture or civil war, but today’s conflicts come with more room for compromise than in the 1850s — and America’s raucous democracy might just be able to sustain an imperfect balance.