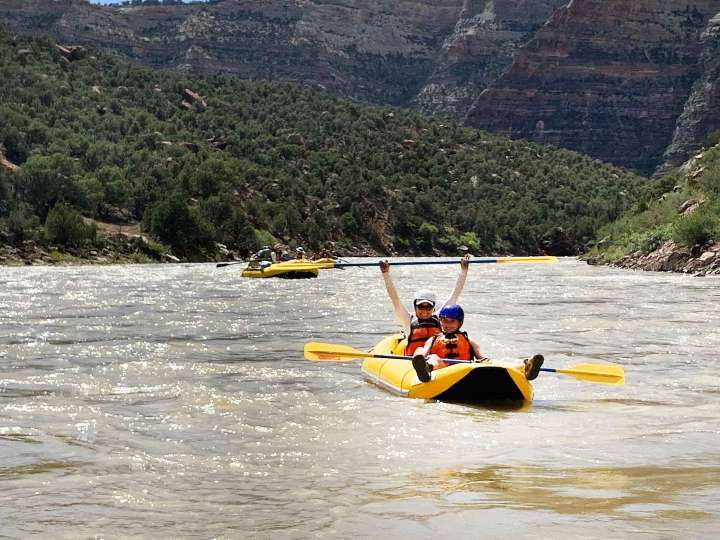 It is almost silent as our flotilla meanders westward to the Yampa River’s confluence with the Green River. Save for the sounds of oars slicing through water and songbirds chirping from the lush vegetation on the river’s banks, we — 21 guests and six river guides — are perfectly still as we float past enormous sandstone canyon walls. Even the kids appear to be transfixed, their eyes pinned to the glassy river surface or the rock walls that have come alive with the sun’s light as it climbs into the sky.

We’ve spent the previous five days rafting the last undammed tributary in the Colorado River Basin. Until now, our trip has been far from silent. There has been the crash of Class III and IV white-water rapids, and gleeful shrieks when those rapids sent bracing river water into the boats. The kids, seven in all, have peppered the guides with questions, laughed until they fell out of their camp chairs, played loud games of tag and hide-and-seek, and asked for seconds of dessert. They have not been silent. Ranging in age from 10 to 16, they bonded quickly on the first of our five days on the trip. Since then, they’ve become a tightknit cohort, and their energetic bond has spread to the rest of us, seven middle-aged parents and seven older folk. We started the river trip as strangers, but within 24 hours of setting out on the Yampa, we have become a team of like-minded adventurers.

Granted, the river guides carry the responsibility for our adventure. Not only are they tasked with getting us safely through the myriad rapids and hauling us into the boat should one of us fall out, but they’re also in charge of keeping us fed and hydrated while teaching the history of this remote, stunning, prehistoric place.

Of all the rivers in the Colorado River tributary, the Yampa is the last without any dams. In May and June, melting snow from the Colorado high country causes the Yampa to swell, making for prime boating conditions. We are here in early June, and the water levels feel sporting at Deerlodge Park, the boat ramp in Dinosaur National Monument where we launch our trip.

I wanted to bring my family onto the Yampa, because it’s free-flowing. The river’s location within the monument protects it, but one of the guides explains that it continues to be threatened by diversion projects upstream. I’m a novice boater and am captivated by the prospect of an undammed river in the West. I’ve read enough by environmental activists such as Ed Abbey and Marc Reisner to know that rivers have inspired enormous controversy. As Mark Twain is famously believed to have said, “Whiskey’s for drinking, water’s for fighting over.” That the Yampa has resisted efforts to build dams along its scenic stretches seems to represent a small victory for nature.

I also chose the Yampa for its beauty and history. On this trip, we’re voyaging through time as we travel west through the Yampa’s magnificent sandstone canyons. The rock dates to the Jurassic Period, which ended roughly 145 million years ago, and is part of the Morrison Formation, a unit that extends throughout the Western United States and, according to the National Park Service, often contains the fossils of dinosaurs, among other creatures.

There are also an abundance of cultural relics left by the nomadic, Indigenous people who used the Yampa’s canyons for about 1,000 years. Our guides promise early on that we will see petroglyphs, pictographs and a massive natural dome that inspires as much awe as the Notre Dame Cathedral in Paris.

Then there’s the actual act of floating. The Yampa is known to be a playful river with several big rapids that lead up to a massive one: Warm Springs. Formed by an immense landslide in 1965, this rapid ranges from Class III to Class IV, depending on the water height. Before plunging through the ferocious, roaring section, we walk alongside the riverbank, up and over rocks, to scout Warm Springs from the safety of firm ground.

I admire the power of the water, so ferocious that it looks alive. I don’t have the knowledge to know exactly what line we’re scouting, and this makes me especially grateful for our guides, die-hard river rats whose maneuvering of the oars and navigation through tricky sections of the river appear effortless, even when the situation is difficult. This becomes clear about 45 minutes after scouting Warm Springs, when one of the guides gets caught in a hole toward the end of the rapid. Her boat tips upward in a move known as “high siding.” She’s the last boat to run the rapid, and those of us on the downriver side watch wide-eyed as she manages to right her raft and liberate it from the rapid’s hold. It’s an act of strength and expertise, and her equanimity is remarkable, even as she later acknowledges the difficulty.

Afloat on a tranquil river, paddlers dip into a different kind of current events

Then again, most river lovers are pretty chill, even as they nurture a passion bordering on fanaticism when it comes to white water. They are unlike any other enthusiasts I know. River people rave about trips from decades past and each winter dutifully apply for coveted permits awarded by federal agencies on a limited lottery basis to float the country’s wildest rivers. If they’re lucky enough to get one of these permits (and few are), they plan expeditions that require navigational expertise and massive amounts of gear. They wax rhapsodically about the freedom of the river and how time changes on the water. They call it “river time,” and they speak of the sublime beauty of leaving everyday life behind and becoming one with the weather, the water, the natural world. Their friendship circles revolve around other equally avid boaters, and many pass on their love of the river to their kids through multigenerational trips.

I think about this on our last day, during the silent part of our float. I’m not the kind of person who typically thinks it would be fun to camp with 17 strangers for the duration of a workweek. And yet here I am on our final day, feeling sad about the prospect of saying goodbye. This trip — and the camaraderie between all of us — has helped to chip away at the anxiety I’ve accumulated over recent years. Pandemic anxiety. Sadness over the death of a loved relative. My own fears of aging and complicated emotions as my children grow older and more independent. Each day on the river, under the sun and in sync with the water’s motion, I have relaxed in a way I didn’t even know I needed.

And it’s not just me. In conversations with others on this trip, I sense that we’re all processing big things — at least the adults. The kids are painting their nails, wrestling in the sand and skipping rocks. But the grown-ups are grateful for being disconnected from cell service and the news, from the pressures of home and society and family. Being on the river is an exercise in being present, and with each passing day, being in the moment becomes easier.

As our flotilla rounds the final bend on the Yampa, just before it flows into the Green, we reach an area known as Echo Park. A guide breaks the silence by slapping his oar on the water. The sound ricochets off the sandstone walls and circles back. Another guide slaps an oar, and another bellows out. The echoes come back and inspire the rest of us to unleash our own voices.

It could be a cacophony. But instead, the sounds braid together as we strangers have braided our own lives over these past few days and return something more melodious than not.

As we round a bend, I look back toward Echo Park and call out. But we’ve passed through the sweet spot. No echo answers me. I see only the sandstone walls and calm water. Above is the hot sun and a tall blue sky. The river’s momentum propels us forward. Ready or not, it will soon be time to go. And when the time comes, and I reluctantly step out of the raft and onto the boat ramp, I understand more intimately why some people upend their lives for river trips. Because one trip on a beautiful, wild river is simply not enough.

Oars has operated commercial river trips since 1969 and has a range of trips in the United States and elsewhere. Yampa River trips run in May, June and early July, after which the water levels drop too low for a viable raft trip. Yampa trips can be four or five days, and prices start at $1,349 per adult.

A pantry-friendly veggie burger starts with canned mushrooms and beans

I overachieved to mask my ADHD. It’s common for women.

Ask Amy: Atheist wants an honest but kind way to bow out of religious activities

Louise Fletcher, ‘One Flew Over The Cuckoo’s Nest’ actress, dies at 88