PetSmart offered free training. But it saddled employees with debt. 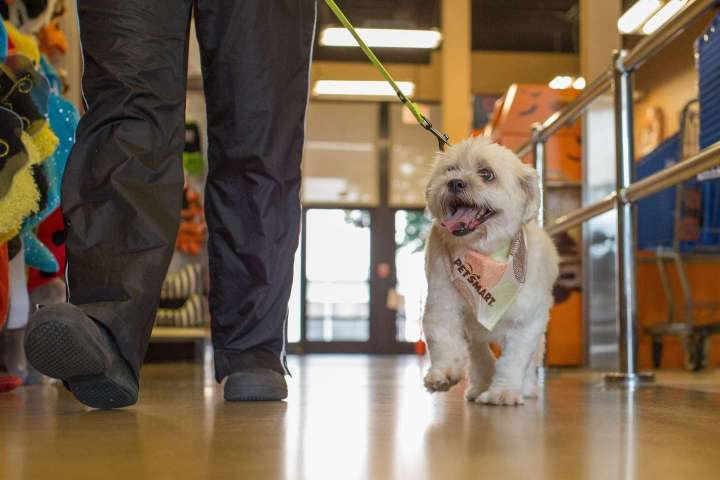 BreAnn Scally started working at PetSmart because she thought it would help her build the skills she needed to one day open an animal rescue, her childhood dream. Growing up, she used to spend her days walking her nana’s dogs, sometimes dragging her blanket into their kennel to snuggle.

Scally, 24, got a job in February 2021 as a “bather” at a PetSmart in Salinas, Calif., hoping to become eligible for “Grooming Academy.” PetSmart’s website touts the “free paid training” as a part of a “career glow up,” with 800 hours of hands-on, supervised training “valued up to $6,000!”

She didn’t realize until months later, she says, that the papers she’d signed to start Grooming Academy and receive grooming tools had locked her into an agreement to stay with the company for two years, or else repay the entire cost of the “free” training.

Americans adopted millions of dogs during the pandemic. Now what do we do with them?

Now Scally is suing the country’s largest pet retailer, in a complaint that alleges PetSmart traps aspiring groomers in an unfair arrangement that allows the company to profit off training and uses debt to discourage workers from leaving their jobs.

“The financial goals that I had, that I was so close to, they’ve become further and further from my reach because of this,” Scally said.

PetSmart said that it does not comment on pending litigation, but that it is “committed to supporting the professional development of our associates.”

The complaint alleges that instead of the free training and grooming tools promised, PetSmart keeps workers on the hook for $5,000 — or $5,500 should they accept a grooming tool kit — if they are fired or quit before two years.

The debt is reduced to $2,500 (or $2,750 with the grooming tool kit) if the employee leaves more than a year after the first anniversary of the start of Grooming Academy.

This practice violates a core tenet of labor and employment law that the employer pay for the cost of doing business, according to Rachel Dempsey of Towards Justice, a nonprofit that represents workers in litigation, who is one of Scally’s attorneys. With Grooming Academy, PetSmart is effectively charging its workers for training while making money off the grooming jobs they complete in the process, Dempsey argues.

Under California law, there is no regulatory requirement for grooming certification. In the absence of such requirement, the law says employers are responsible for the cost of required training that is incurred for the employer’s benefit, the complaint says.

“No matter how you characterize the training … PetSmart is doing something illegal,” Dempsey said. “You cannot make employees pay for their own training or pay to work for you.”

David Seligman, executive director at Towards Justice and another attorney for Scally, said that, broadly speaking, restrictive agreements like the one PetSmart requires for its groomers allow employers to pay workers less and provide fewer benefits, “because they don’t have to worry about one of the primary ways employees exercise their power which is by quitting and finding a better job.”

Many PetSmart groomers make barely above minimum wage, the complaint notes. Scally was making $15 an hour.

“For these workers, $5,500 could be more than two months of pay. As a result, leaving their jobs in search of higher wages could lead to difficulty paying rent or putting food on the table,” the complaint alleges.

The job market is beginning to show cracks

Michael Rubin, an employment lawyer with Altshuler Berzon in San Francisco, argues that the debt “can be used to ensure a workforce that is more compliant” and “far more fearful” about speaking up.

“The fact that someone has gone through PetSmart Grooming Academy isn’t going to enhance that person’s ability to get another job in the field,” Rubin said. “It really maximizes their chances of sticking around PetSmart long enough that the debt is paid off.”

PetSmart has faced criticism over conditions in its salons before: A 2018 investigation by NJ Advance Media found that at least 32 dogs had died “during or within days” of grooming at PetSmart since 2015, when the company was purchased by the private equity firm BC Partners.

PetSmart said in a statement that its academy-trained groomers receive more than 800 hours of instruction, “significantly more than any state licensing program.”

“We love and care for the pets in our care as if they are our own,” the statement said. “We perform more than 13 million grooming appointments per year, and we will never waver on our industry leading standards that millions of pet parents entrust us to uphold.”

Former employees told NJ Advance Media that the company’s groomer training “can fall short of what’s advertised.” Workers said that they “have seen unprepared trainees rushed into stores because of short-staffing” and that “many felt either ignored or retaliated against when they spoke up about safety concerns or wrongdoing by colleagues,” according to the investigation.

Walmart cut its profit outlook. Here’s why that might worry rivals.

Jenna Wait, PetSmart’s quality and education leader in California, has been with the company since 2008. She started out as a bather and worked her way through Grooming Academy before serving as a district trainer for eight years.

“Grooming is a skill and it takes time to master,” Wait said. “There’s so much more than people think.”

Grooming Academy takes four weeks, Wait said, three of which are spent working alongside a district trainer so trainees can get close supervision as they learn about coats and products and breed standards, working their way from simple shave-downs to hand-cut scissors techniques for poodles.

“One of our strongest features is the amount of time that we spend working hands-on with our groomers,” Wait said.

But Scally said the reality she found was far different: After a week of workbook training, she said, she was dropped into the deep end of salon styling.

The salon manager responsible for Scally’s one-on-one training was also supervising several other groomers and bathers while maintaining her own schedule of grooms. Scally said she learned by watching other groomers and working through training exercises on her own, when she wasn’t answering phones, checking out customers, scheduling appointments and keeping the salon clean. Sometimes she and the other workers were so busy they’d go a whole shift without a break or meal, according to the complaint.

How to create a pet-friendly office that everyone can tolerate

Scally loved working with dogs despite the challenging environment, but after seven months of struggling to get by, she was forced to accept that she couldn’t support herself (and her three cats and dog) while working at PetSmart.

“I was basically just scraping up dollars every week to make it to my next check and get a couple gallons of gas to get home,” Scally said.

It was only when Scally tried to leave that she realized her “free paid training” had left her with a $5,500 debt to PetSmart. Scally said that when she approached her manager, she was told PetSmart was unlikely to try to collect if she could sell enough products and groom enough dogs to make the money back before quitting. So she said she kept track of the revenue she brought in and didn’t quit until September 2021, when she thought she’d made enough.

But in January, a collection notice appeared on Scally’s credit report for $5,500. She said the debt made a huge dent in her credit score, preventing her from co-signing a lease on an apartment with her partner. She put off her plans to return to veterinary school because she didn’t want to take on more loans with a lower credit score.

Scally now works as an animal care technician, doing cage changes and health observations on lab rodents. It was the best job she could find that still let her work with animals.

“For me to have this financial burden of paying back $5,500, it’s disheartening because I could have done something else,” Scally said. “I could have possibly paid an online grooming academy $500 for probably more than what I got for what PetSmart charged me.”