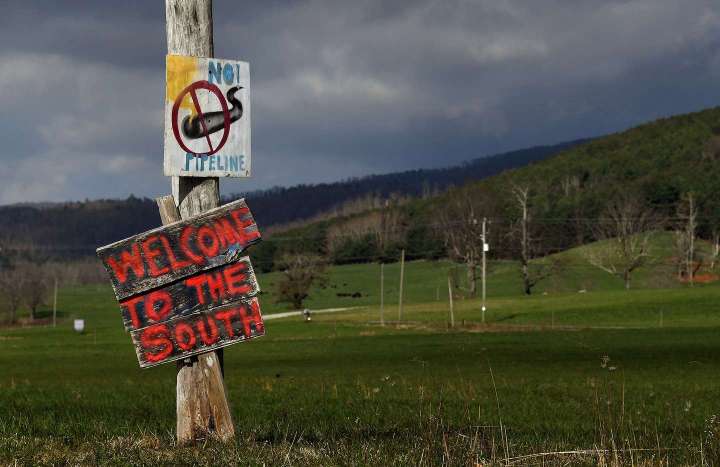 The deal this week that secured the support of Sen. Joe Manchin III (D-W.Va.) for major economic legislation contained a small provision that could have an outsized impact in federal courts.

In an early version of the talks, Democratic leaders agreed on a proposal that would move future litigation involving a particular natural gas pipeline proposed in Manchin’s state to be heard by the U.S. District Court for the D.C. Circuit and that judges weighing the cases would be randomly assigned. Experts say the ramifications of such a deal would go beyond the controversial Mountain Valley Pipeline project that has long been stalled by the courts over environmental concerns.

“It would create a new pathway for lobbyists” to demand “congressional forum-shopping” for pet concerns, said Michael Gerrard, an environmental law professor at Columbia University, on the grounds that “’Joe Manchin did it for them; why can’t you do it for me?’”

It’s not clear what language will be used in a final agreement. A longer draft bill that has circulated among environmental and energy lobbyists, first published by Bloomberg, says only that federal courts “shall randomly assign cases seeking judicial review of any Federal authorization of a covered project to the maximum extent practicable to avoid the appearance of favoritism or bias.”

The word “practicable” leaves plenty of wiggle room for courts to assign cases as they see fit.

The idea of legislation that affects only Mountain Valley Pipeline is raising hackles, but anything written broadly enough to include other projects might garner resistance from companies satisfied with their local appellate courts. People involved in the negotiations said the draft is changing constantly and will not be final until a vote in late September; a spokeswoman for Manchin called this draft “outdated and incomplete.”

As its name suggests, the pipeline first proposed in 2014 goes high and low in its 303-mile path through West Virginia and Virginia. From its inception, environmentalists have fought the plan as polluting waterways and damaging rock; landowners have protested the use of eminent domain to seize their property. After numerous legal battles, including one that ended in a consent decree over violations of Virginia law, the pipeline is now years behind schedule and billions of dollars over budget.

A spokeswoman for the company did not return a request for comment but told the Virginia Mercury that “MVP is being recognized as a critical infrastructure project that is essential for our nation’s energy security, energy reliability, and ability to effectively transition to a lower-carbon future.”

Federal courts make their own rules regarding assignment of judges to cases. In the Fourth Circuit, as in most federal courts, cases are initially assigned randomly, but related litigation is often given to the judges who have become familiar with the facts and legal issues involved.

The same three-judge panel has heard most of the Fourth Circuit cases involving the Mountain Valley Pipeline — Chief Judge Roger L. Gregory, who was given a recess appointment by President Clinton before his nomination by George W. Bush, and Judges Stephanie D. Thacker and James A. Wynn Jr., both Obama appointees. The Fourth Circuit has ruled that federal agencies failed to consider erosion, construction runoff or the impact on endangered fish species when approving permits and that the company would not complete work crossing streams quickly enough.

It’s not clear that the D.C. Circuit would rule differently if new permits are issued and challenged, but the company behind Mountain Valley Pipeline has made clear it blames these particular judges for its woes. Their lawyers recently took the unusual step of demanding a new set of judges, saying that repeated adverse rulings from the same panel has created “the perception of a deck stacked against large infrastructure projects generally and one private party specifically.”

Noting that the same judges had ruled in favor of the pipeline on other issues, the project’s opponents responded in a filing that “MVP’s track record in permit challenges reflects systemic flaws in the permitting of MVP’s pipeline, rather than ‘a deck stacked against’ it.”

The court denied the request for a new panel, and the full Fourth Circuit declined to reconsider the panel’s judgments.

Joe Lovett, executive director of Appalachian Mountain Advocates, one of the group’s challenging the pipeline in court, called the potential agreement to move all future litigation to the D.C. Circuit “crazy.”

“It would call into question the legitimacy of our federal courts, even as that legitimacy is being questioned on issues like abortion and voting rights,” he said. “To preserve the integrity of the courts, I hope this effort fails.”

There are other provisions in the circulated draft that could help Mountain Valley Pipeline “as well as hundreds of other renewable energy, transmission and highway projects dealing with the same permit approval delays due to confusing overlapping requirements,” said Alex Herrgott, president of the nonprofit Permitting Institute and an infrastructure official under President Donald Trump. But the words “Mountain Valley Pipeline” do not appear.

Sam Sankar of Earthjustice, a law firm that works on environmental advocacy, said directly requiring new judges review the Mountain Valley litigation would be seen as “improper and potentially illegal interference in an ongoing case.” So the draft “might be a hint or viewed or thought of as a hint to this panel or the Fourth Circuit more broadly to reassign those cases. It does not strike me that its likely to have much of a direct effect. Those judges will make their own decisions.”