Just when you thought Josh Hawley couldn’t stoop any lower … 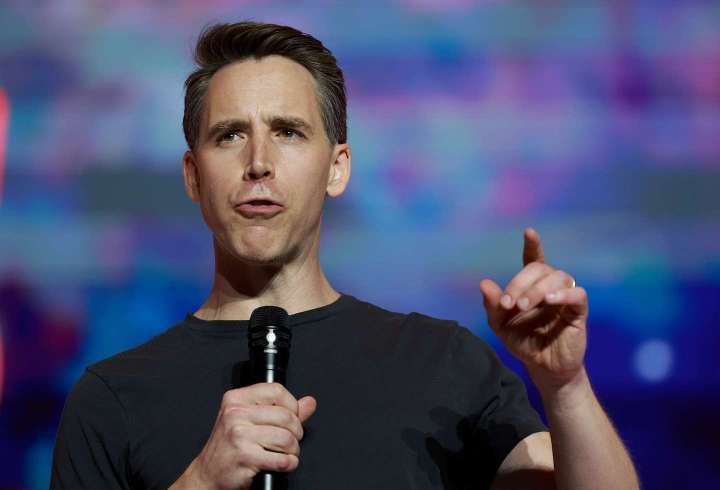 Take a can of beer, add light rum and stir frozen limeade concentrate into the mixture. Voila! You’ve whipped up a cocktail known as the Missouri Jackass. Surprisingly, the drink is not named for the state’s junior U.S. senator.

Josh Hawley (R-the nearest full-length mirror), last seen dashing in fear from the Jan. 6 mob he helped incite — he was the guy who raised his fist as high as his ludicrously tight-fitting suit would allow — is back in the news for his lonely stand against NATO membership for Finland and Sweden. In search of a position that would set him apart from his rivals among the Senate’s young conservatives, Hawley arrived at the cockeyed notion that adding two robust military powers with vibrant economies would somehow increase NATO’s burden on U.S. resources.

By “lonely” I mean that Hawley was the only senator to vote no. Minority Leader Mitch McConnell (R-Ky.) looked ready for a stiff drink as he contemplated this epic display of grandstanding idiocy. “If any senator is looking for a defensible excuse to vote no, I wish them good luck,” McConnell said — fully aware that the Missouri, um, senator had already announced his opposition. “This is a slam dunk for national security that deserves unanimous bipartisan support.”

A slam dunk indeed. Sen. Tom Cotton (R-Ark.) shares Hawley’s boundless ambition, although in Cotton’s case, there is some justification for it — not least a military experience that permits him to understand certain basics. Said he: “Aside from their military strength and economic power, Finland and Sweden also allow us to turn the Baltic into a NATO lake, bottle up Russia’s Baltic fleet, cut off its isolated military base at Kaliningrad and expose Russia itself to much greater risk in the event of conflict.”

In his defense, Hawley has lately been occupied with other matters. He is the author of the forthcoming book “Manhood,” which promises to be a worried meditation on a topic that, in my experience, is rarely discussed by people who are secure in their own. Perhaps his research was so solitary and all-consuming that it left no time to consult a map or a history book.

Had he done so, he might have learned that Cotton is correct: Given their location, Finland and Sweden add far more to NATO than just their robust economies and their well-trained and well-equipped militaries. In strategic terms, the shift of these nations from neutral status to NATO membership is a massive failure for Russian President Vladimir Putin. In the necessary effort to impose a steep penalty for Putin’s aggression in Ukraine, this is a huge success, at negligible cost.

Attempting to rationalize his vote, Hawley argued that NATO expansion could only mean weakening U.S. resistance to Chinese hegemony in the eastern Pacific. But this muddled thinking can’t survive first contact with logic. The competition with China is not (yet) a primarily military competition. While China is certainly increasing its military capacity, it remains a weaker power compared with the United States. Nor is the competition primarily a matter of economic strength. The U.S. economy continues to be the largest and most diversified in the world.

Today, the most important aspect of U.S. competition with China is in the sphere of expectations. Nations worldwide are looking to the future and placing their bets. Perceptions of strength and perceptions of weakness both tend to be self-fulfilling, and if other countries perceive that China is rising while the United States is in decline, the actions they take will strengthen China and further weaken the United States. Nations will invest in China, align with China, borrow from China and curry favor with China.

It is unfortunate that the world must choose. For a generation, the United States has made extraordinary efforts to encourage China’s development in hopes that it would join the peaceful and prosperous world order stretching from Europe across the Americas and on to the Pacific powers of Japan, Australia, South Korea and so on. Unfortunately, under President Xi Jinping, the Chinese Communist Party has tightened its grip, squelched liberty, menaced its neighbors and knocked its own economy off-kilter. Xi has turned to muscle-flexing to distract his people from his own parade of errors and outrages.

Every new ally the United States embraces is another vote for the Western way of peaceful progress. Bringing Sweden and Finland, two of the world’s leading economies and strong democracies, out of neutrality and onto the U.S.-led team is not a distraction from the competition with China. It’s a major victory.

These are serious matters with real implications for human freedom. The Senate is to be commended for its overwhelming and bipartisan action. As for Hawley, maybe a little beer, rum and limeade would make him easier to tolerate.