Mandela Barnes could save the Democrats from Manchin and Sinema 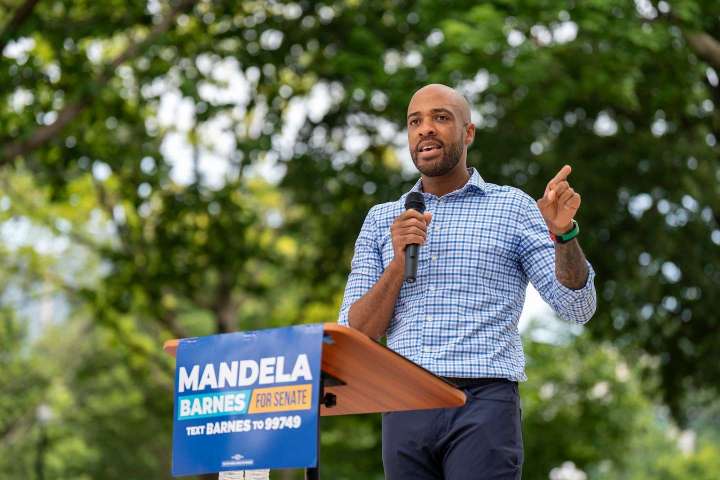 Mandela Barnes could become a model for progressive and Black candidates if he wins Wisconsin’s U.S. Senate race this fall — and also give the Democrats a Manchin-and-Sinema-proof Senate majority.

Barnes effectively won the Democratic Senate primary when his top three opponents all dropped out of the race last week and endorsed him. Barnes’s primary victory on Tuesday won’t be a big upset; he is the current lieutenant governor after all.

But it wasn’t a given either. Many officials, operatives and even voters in the Democratic Party tend to view candidates who are progressive, women and/or people of color as less likely to win general elections, even though the evidence for these views is fairly thin.

In terms of these electability perceptions, Barnes launched his Senate run last summer with a bunch of liabilities: his past support of Medicare-for-all; a picture that had been taken of him and posted online in which he is holding a T-shirt that calls for the abolition of the Immigration and Customs Enforcement Agency; and perhaps most important, that he is a young Black man (now 35 years old) running in a state that is more than 80 percent White and that Donald Trump won in 2016. Wisconsin has a long history of progressive politics, including current senator and Medicare-for-all backer Tammy Baldwin (D), but it is mainly a history of White progressives.

In both overt and subtle ways, some of Barnes’s opponents, as well as journalists and more centrist Democrats, spent much of the past year suggesting he wasn’t a great candidate for the party to nominate against incumbent Republican U.S. Sen. Ron Johnson.

So how did Barnes clear the primary field?

First, he repositioned himself slightly on policy. While emphasizing his progressive views on issues such as supporting unions and abortion rights, Barnes did make not Medicare-for-all a centerpiece of his campaign, and he repeatedly noted that he does not back abolishing ICE or reducing police funding.

Second, Barnes was able to get endorsements not only from progressive Democrats like Sen. Elizabeth Warren (Mass.), but also from more center-left figures in the party, such as Sen. Cory Booker (N.J.) and House Majority Whip James E. Clyburn (D-S.C.) He got those endorsements because while a big part of his brand is being a progressive, Barnes has a broad network within the party, having served as a community organizer in Milwaukee, a state representative and one of the few Black lieutenant governors in the country.

Third, with the Democratic Party constantly worried it is not doing enough to connect with Americans who are middle or lower income, Barnes emphasized his humble background. He grew up in a low-income area in Milwaukee, the child of a public school teacher and a factory worker. (His parents named him Jesse Mandela Barnes as a tribute to the South African icon, and Barnes has long gone by “Mandela.”)

Finally, Barnes’s campaign consistently touted any poll that showed him defeating Johnson, directly addressing any questions about his electoral viability.

It’s not fair that Black and progressive candidates have to go out of their way to prove their electability. After all, White centrist Democrats lose all the time, too.

Nor is it ideal that left-wing Democratic politicians sometimes have to abandon well-grounded positions on policing or health care to prove their electoral viability.

That said, 2020 Democratic presidential candidates like then-Sen. Kamala D. Harris (Calif.), Sen. Bernie Sanders (I-Vt.) and Warren would likely have done better against Joe Biden if they had spent more time emphasizing that they could win the general election and played down some of their most divisive stands. Policies like Medicare-for-all and abolishing ICE have almost no chance of getting adopted, so progressive candidates who tout them create electoral problems for themselves without any practical benefit.

Without making all those moves, it’s not clear that Barnes would have won the primary and had the chance to show he can win a general election. How Barnes cleared this perceived electability bar could be an important lesson for progressive candidates and candidates of color, who are sometimes blocked by Democratic activists, donors and voters during primaries because of doubts about their general election chances. If Barnes beats Johnson, expect to see Black and progressive candidates borrow from these tactics, particularly if they are running statewide in swing states.

But a Barnes general election victory isn’t assured. Despite all of the discussion in the primary about whatever individual liabilities Barnes might have, his biggest challenge will be the same one his White opponents would have faced: running in a swing state in a year when their party controls the White House. Candidates in those circumstances often lose. While Johnson is a controversial figure, he’s still an incumbent who won a close race in 2016.

A Barnes win would be a huge coup for Democrats. He could help the party keep a majority in the Senate. He could also be part of a real Senate Democratic majority, as opposed to the tenuous control Democrats have now, always needing the votes of enigmatic Sens. Joe Manchin III (W.Va.) and Kyrsten Sinema (Ariz.). Victories by Barnes and the Democrats’ Senate candidate in Pennsylvania, Lt. Gov. John Fetterman, would give the Democrats 52 seats in the chamber, as long as the party’s incumbents also win their races.

And because he would be another “skinny kid with a funny name” who also is Black, young, charismatic and Midwestern, a Senator Barnes would likely become a national figure.