Putin is doing his best to out-fascist Mussolini 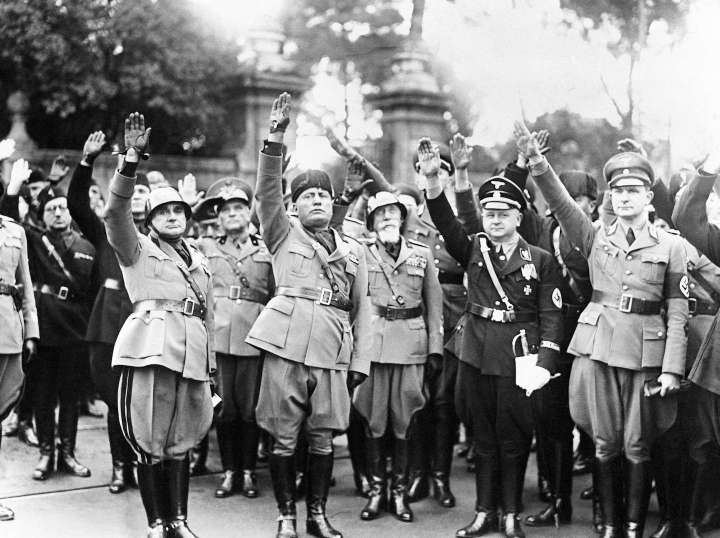 Fascism’s vitality in the 21st century marks it as the most successful fighting faith from the 20th century. So, it is well to understand fascism’s founder, who 100 years ago this October orchestrated the March on Rome (he arrived there by railroad sleeper car) that propelled him into power at 39, the youngest ruler in the world at that time. The destroyer of Italy’s parliamentary democracy has a political descendant occupying the Kremlin today.

Antonio Scurati’s “documentary novel” about Benito Mussolini, “M: Son of the Century,” was published in Italy in 2018, has received Italy’s premier literary award, and has been translated for publication in 46 countries. It is a long — 761-page — exploration of il Duce’s mind and of this: Fascism does not merely condone violence, it is violence. Set in Italy’s agony, 1919-1924, the novel bludgeons readers with depictions of the beatings and killings that made Italy resemble a nation without a state.

Mussolini’s roving bands of Blackshirts, “bursting with appetites,” wielded clubs with precision, “bashing both sides of the mouth, both mandibular joints, in order to fracture the jaws.” And there was “the castor oil routine”: “You seize a diehard socialist, ram a funnel down his throat, and force him to drink a quart of laxative. Then you tie him to the hood of a car and drive him through town …”

Three days after denouncing a massacre by his followers, Mussolini “proclaimed a general amnesty for politically motivated blood crimes committed for ‘national ends.’” This “master of exhaustion” came to power promising to tame his violent followers but instead indulged their addiction to “carefree ferocity.”

Mussolini, the anti-Enlightenment embodied, was a fervent socialist until he became a fervent fascist, a transformation from one anti-individualism to another. Scurati’s Mussolini muses:

“All people [are] shaken to their inner-most core by an irresistible desire to submit to a strong man and, at the same time, to hold sway over the defenseless. They are ready to kiss the shoes of any new master as long as they too are given someone to trample on.”

Mussolini was an unimposing 5 feet 6 inches tall — 2 inches shorter than Adolf Hitler, 2 inches taller than Francisco Franco — but was fascism: pure energy in search of occasions for aggression. As a fascist, he had no precursors; he was, however, a precursor of the performative masculinity of the bare-chested, judo-practicing, stallion-riding Vladimir Putin.

An essay in last week’s Economist establishes that Putinism is fascism: a simmering stew of grievances and resentments (about post-Soviet diminishment) expressed in the rhetoric of victimhood. Putin’s regime relies on violence wielded by the state and by state-tolerated assault brigades akin to Mussolini’s militias. Mussolini’s cult of personality was bound up with restoring the grandeur that was the Roman Empire — or at least tormenting Ethiopia. The cult of Putin the strong man promises the restoration of a supposed golden age that ended with the Soviet Union’s ignominious collapse.

As in Mussolini’s Italy, there is in Putin’s Russia what the Economist calls a “culture of cruelty” where “domestic abuse is no longer a crime” and “nearly 30% of Russians say torture should be allowed.”

As the Economist notes, Alexander Yakovlev, a democratic reformer who worked under Mikhail Gorbachev, warned us in the late 1990s: “The danger of fascism in Russia is real because since 1917 we have become used to living in a criminal world with a criminal state in charge. Banditry, sanctified by ideology — this wording suits both communists and fascists.”

The fascist aesthetic of redemptive, regenerative violence serves the fascist philosophy of national purification through the “self-detoxification of society” (Putin’s phrase). So, genocide, understood to encompass the erasure of an entire people’s cultural identity, flows inexorably from fascism. Andrew Stuttaford, writing for National Review, notes that Russians are not only destroying Ukraine’s cultural signifiers (churches, monuments, etc.), they are forcibly relocating to Russia more than “a million Ukrainians … among them hundreds of thousands of children, including, reportedly, orphans — some young enough to forget their identity and their language.”

“The engine of fascism,” the Economist says, “does not have a reverse gear. … It will seek to expand both geographically and into people’s private lives.” As Mussolini, the first fascist, said: “Everything within the state, nothing outside the state, nothing against the state.”

Putin’s regime encourages the public to show support for the Ukraine war by displaying the “Z” sign, which the Economist calls a “half-swastika.” Fascism might flourish more in this century than it did in the previous one.