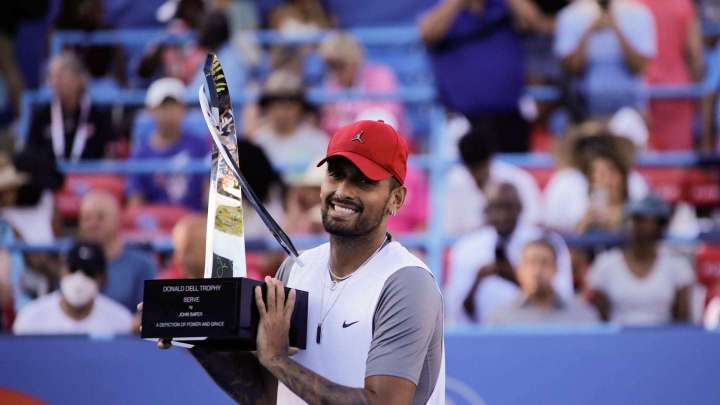 The face was familiar, but it was an entirely new Nick Kyrgios who swept the Citi Open’s singles and doubles titles Sunday.

With a dominant display of serving and fault-free on-court comportment, Kyrgios defeated Yoshihito Nishioka, 6-4, 6-3, to claim his second Citi Open singles championship in three years at Rock Creek Park Tennis Center. Then, after an hour’s rest, he teamed with Jack Sock to claim the doubles title, 7-5, 6-4, over fourth-seeded Ivan Dodig and Austin Krajicek.

With Sunday’s singles championship, the notoriously combustible but supremely gifted Australian completed a nearly flawless run in which he conceded just one set in five matches, never had his serve broken and blasted a tournament-high 96 aces, including 12 against Nishioka.

Moreover, Kyrgios was not fined once.

“I feel like I have really kind of reinvented myself this year,” the 27-year-old said during the news conference that followed his second match of the day. “Honestly, I feel as if I’m a lot older, a lot more mature. I feel like when you play on the tour and you age and you get older, you realize you shouldn’t be taking these things for granted — the way you’re feeling, the way your body feels.”

The Citi Open is part of the North American hard-court circuit billed as the “Road to the U.S. Open,” in which players compete for trophies, prize money and ranking points while honing their games heading into the season’s final major.

This year, Kyrgios has his eye on something else: climbing high enough in the rankings to get one of the 32 seeds at the U.S. Open. His Citi Open triumph, coming three years and three days after he edged Daniil Medvedev for the 2019 Citi Open trophy, has carried him a long way toward that goal. By reaching Sunday’s final, Kyrgios was assured of vaulting from 63rd to 42nd. By winning the tournament, he will climb to 37th on Monday.

A top-32 ranking will assure him of a U.S. Open seed, which is likely to protect him from facing a top opponent in the first round. Depending on how many top pros opt out — whether because they’re injured or have chosen not to be vaccinated for the coronavirus — a slightly higher ranking could guarantee a seed.

For Kyrgios, who has spent much of his 10-year pro career not caring about rankings (or professing not to care, at least), it represents a turnaround. If it also represents a newfound commitment to maximizing his talent in the years ahead, so much the better.

A former world No. 1 junior, Kyrgios reached a career-high No. 13 in 2016 but bristled at the expectations that followed. He competed intermittently and at times undermined his career by pitching profane tantrums and turning in halfhearted efforts on the court.

But at the start of the 2022 season, Kyrgios said, he began investing more in his training and preparation. Reaching last month’s Wimbledon final, where he outplayed defending champion Novak Djokovic in the early going, affirmed that the sacrifice was worth it.

The Citi Open was the first singles event Kyrgios contested since his four-set loss to Djokovic, who claimed his seventh Wimbledon title and his 21st major.

“I think you have got a small window after a Grand Slam that people kind of fear you before they step out on the court,” Kyrgios said. “I feel like I made the most of it this week. I’m really happy with my performance.”

The Kyrgios-Nishioka final wasn’t the championship pairing fans expected when the draw was unveiled. But upsets were a daily occurrence as Washington’s late-summer heat and humidity got the best of some — including American Taylor Fritz, who retired from his third-round match while trailing in the third set. He later confessed embarrassment on social media that his vision “was going fuzzy” and he felt as if he were going to pass out.

All 16 seeds, as well as former No. 1 Andy Murray, were ousted in the earlier rounds, with the 96th-ranked Nishioka single-handedly ushering out four: top seed Andrey Rublev, No. 7 Karen Khachanov, No. 11 Alex de Minaur and No. 16 Dan Evans. All told, Nishioka beat five higher-ranked players in five consecutive days, putting together the most impressive run of his pro career. As a result, the 26-year-old from Japan will vault from 96th to 54th when the ATP rankings are retabulated.

Nishioka is not physically imposing. Just 5-foot-7 and 141 pounds, he nonetheless is a tricky left-hander who is at his best when he plays with abandon and doesn’t think about the stakes. That was his winning formula, he explained, behind his straight-sets upset of Rublev in a semifinal Saturday.

That was difficult to do Sunday against Kyrgios, against whom he was 0-3 in their previous meetings, with the prospect of his first ATP 500 level title at stake.

It was just past 5 p.m. when they stepped onto Stadium Court, but the 89-degree heat felt like 97 degrees when factoring in the humidity.

Kyrgios broke serve to open the proceedings. As the match unfolded, it was clear that Kyrgios had the more varied game, able to generate pace, play wicked angles and flick deft drop shots. With his big serve working well, Kyrgios faced only one break point in the first set, fending it off with little trouble, and closed it with relative ease.

Kyrgios opened the second set as he did the first, breaking Nishioka to build on his lead. By then, shadows had crept across the court, and Kyrgios would soon hold the Citi Open trophy again.