Kalorama house is on the market for $4.5 million 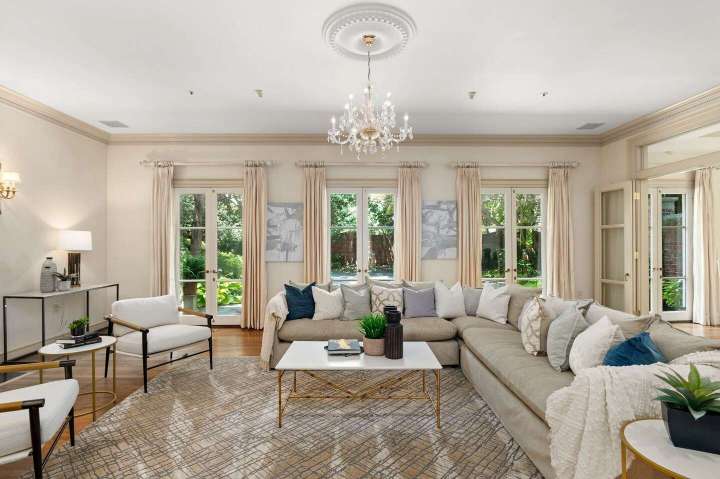 The odd-numbered side of the 2300 block of S Street NW, in D.C.’s Kalorama neighborhood, has just two private homes — the one Jeff Bezos (owner of The Washington Post) reportedly bought in 2020 and this house, both built in 1958. The rest belong to the Netherlands, Pakistan, Mauritania and China. Across the street are the former Textile Museum (which Bezos bought in 2016 and converted into a private residence) and the Woodrow Wilson House.

Augusto Lopez-Claros and his wife, Mirta Lopez, who have lived all over the world, were less interested in who their neighbors are than what the location offered.

“Over the previous two decades, work had taken us to Moscow, London, Geneva and Madrid, and we were looking for a property that was in the center of the city, close to the museums, the Kennedy Center (we are both classical music enthusiasts) and green areas, such as the Rock Creek park,” Lopez-Claros wrote in an email.

ShareShare
View PhotosView Photos
Next Image
Kalorama house | The 1958 house is in D.C.’s Kalorama neighborhood. It is listed at just under $4.5 millon. (Constance Gauthier)

The couple, who bought the house in 2011, also wanted a home that allowed them to entertain large groups comfortably. They enjoy inviting guests for talks and dinner parties. But they weren’t the first people to take advantage of the house’s layout. Several other notable Washingtonians have lived and entertained here.

Philip M. Stern is believed to have been the first owner. Stern was a philanthropist, author and Democratic Party activist. He served as a deputy assistant secretary of state for public affairs in the Kennedy administration. His books include “The Best Congress Money Can Buy” (1988); “The Great Treasury Raid” (1962); and “The Shame of a Nation” (1965). He spent several months in 1974 as a special investigative reporter on the life insurance industry for The Washington Post.

Taylor also had worked in the Kennedy administration, serving as special counsel to and executive vice chairman of the newly formed President’s Committee on Equal Employment Opportunities, forerunner of the Equal Employment Opportunity Commission. He was the first non-White person to direct the staff of a presidential committee. He is credited with coining the term “affirmative action.” Taylor later was director of the Export Import Bank under President Lyndon B. Johnson.

Mishal al-Sabah, now crown prince of Kuwait, is listed in the deed records as owning the house from 1983 to 1988. Requests to the Embassy of Kuwait to confirm his ownership went unanswered.

Ellen Tauscher paid $1.5 million for the house in 1996, shortly after she was elected to the House of Representatives from California. Tauscher, who was one of the first women to hold a seat on the New York Stock Exchange, served in Congress for more than a decade. She resigned her seat in 2009 to join the State Department as a senior arms control adviser to President Barack Obama.

After taking possession of the house, Mirta Lopez worked closely with Jennifer Gilmer Kitchen and Bath in Bethesda, Md., to update it. On the third floor, the owner’s suite bathroom and dressing area were transformed. The fourth-floor bathroom also was redone. Carpeting was removed, revealing near-pristine hardwood floors. Both kitchens — the main one on the second level and the catering one on the first level — were revamped. A room next to the main kitchen was turned into a breakfast area.

But several of the home’s original features were not touched, including the sweeping spiral stairway and the wall of windows next to it, both of which span all four levels. In the marble foyer, the sculptural stairway provides a stately entry to the house.

“It was one of the features that we found very attractive,” Augusto Lopez-Claros said by phone from Madrid, where he is head of the Global Governance Forum. “The combination of the circular stairway and the very large window that goes from the first to the fourth level really gave the house an enormous amount of light.”

Mirta noted that the stairway is not steep and, therefore, is easy to climb. For those who don’t want to take the stairs, an elevator runs to all four levels.

Because the house is built into a hill, both the entry level and the second level open to the outdoors. The living room has several glass French doors that lead to a walled courtyard in the rear. There is parking for three cars in front of the house, and a cleverly concealed, attached garage has room for a fourth car. Rather than a traditional garage door, the opening to the garage looks like a set of glass French doors with shutters.

“It’s a very comfortable, easy house,” Mirta said. “It has a lot of natural light. It has a wonderful flow when you have guests. … But aside from that — this is a little bit esoteric — I think every house has a soul and this house is one of the happiest houses.”

The five-bedroom, seven-bathroom, 6,700-square-foot house is listed at just under $4.5 million.