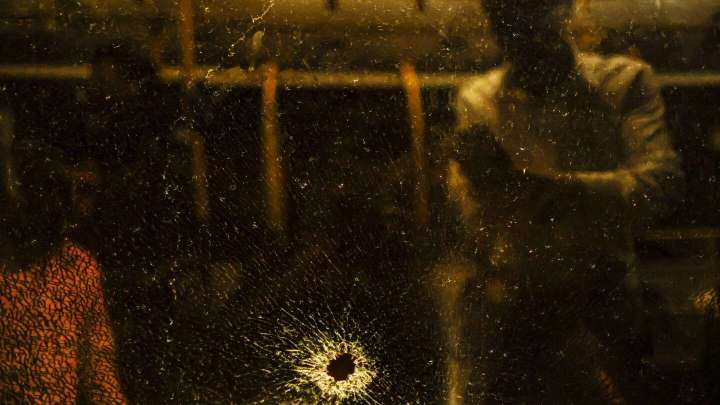 JERUSALEM — Eight people were injured, among them U.S. citizens, in a suspected Palestinian gun attack on a bus near Jerusalem’s Western Wall in the Old City early Sunday, Israeli police and medics said.

The alleged shooter turned himself and his weapon in hours after fleeing the scene and setting off an extensive manhunt, according to Israeli Police Commissioner Yaakov Shabtai.

Tom Nides, the U.S. ambassador to Israel, said he was “deeply saddened to confirm that Americans were injured in this attack.”

“I’ve spoken with the families and will keep them in my prayers,” he said in a statement on Twitter.

Both Nides and the U.S. Office of Palestinian Affairs said in statements early Sunday that they strongly condemned what they described as a “terrorist attack.”

A spokesperson for the U.S. Embassy in Jerusalem declined to provide further details about the victims, citing privacy concerns. They spoke on the condition of anonymity in accordance with embassy protocol.

The shooting comes less than a week after Israel and militants in the Gaza Strip reached a tentative truce to end several days of fighting that killed at least 47 Palestinians in the blockaded enclave, and amid an ongoing Israeli crackdown in the occupied West Bank after violence flared there this spring.

Sunday’s attack in Jerusalem happened about 1:30 a.m. local time in two locations near the entrance to the Western Wall, one of Judaism’s holiest sites.

A gunman opened fire on a bus and vehicles by a parking lot, and then ran into the adjacent Palestinian neighborhood of Silwan, according to Israeli police.

Israel’s emergency medical service said that it treated people with gunshot wounds on the scene and that seven were hospitalized.

Two of the injured were in critical condition, among them a pregnant woman who was shot in her abdomen and underwent emergency labor, Israeli media reported.

Israeli Prime Minister Yair Lapid condemned the attack Sunday and warned that “all those who seek our harm should know that they will pay a price for any harm to our civilians.”

New York Gov. Kathy Hochul (D) said she was working with the State Department amid reports that state residents were among the injured.

“I am horrified by the terror attack in Jerusalem, and by the news that a family of New Yorkers has been impacted,” she tweeted.

No Palestinian group took responsibility for the attack, and Israeli police did not immediately release further details about the alleged shooter.

A spokesperson for Hamas, the militant group that rules Gaza, praised the “heroic operation” against the “arrogance of the occupation’s soldiers and extremist settlers.”

U.S.-backed peace plans since the 1990s have called for a Palestinian state in east Jerusalem, the West Bank and the Gaza Strip. Israel claims Jerusalem as its undivided capital, which most of the international community rejects.

The country is gearing up for another round of elections, its fifth in less than four years, in which security, as well as economic issues, are typically key concerns among voters.

Violence in Israel had subsided somewhat since the spring, when at least 19 people in several cities were killed in a spate of Palestinian attacks with guns, knives and a vehicle. Since then, Israeli forces have conducted near-nightly raids on West Bank communities and killed dozens of Palestinians.

Among the dead this spring was Palestinian American Shireen Abu Akleh, a veteran journalist for Al Jazeera who was killed in May while covering clashes in the Palestinian city of Jenin. The Washington Post and other major media outlets concluded that Israeli forces likely fired the shot that killed Abu Akleh, who was far from any fighting.

Israel said its own investigation found the source of the bullet inconclusive, but that its soldiers did not deliberately shoot. A U.S. investigation released in June said the gunfire was likely to have come from Israeli forces but concluded it was probably unintentional, angering Abu Akleh’s family.

Steve Hendrix contributed to this report.