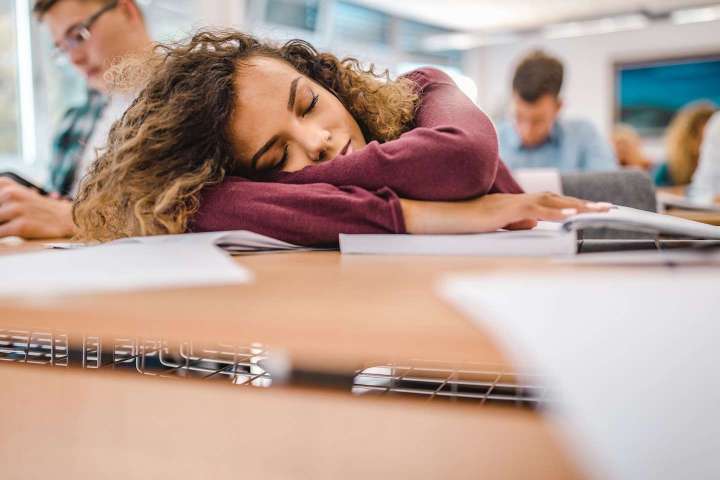 Last month, when a 2019 law took effect in California demanding that public high schools begin classes no earlier than 8:30 and junior highs at 8 a.m. I was ready to celebrate — except for one thing. What took so long?

It was decades too late for me, who lived across the street from my high school and was still late most days. I was tired. So tired. And my experience was, apparently, more common than not.

Sleep deprivation is a major issue among teens, so much so that the American Academy of Pediatrics has been calling for later junior high and high school start times since 2014. It’s “an important public health issue,” they said, one with implications not just for safety but for “academic success.”

But fewer than 1 in 5 high schools currently does what’s best for their students. For this, we can mostly blame a combination of inertia, school administrators and teacher unions, which have staunchly fought both parent-driven and legislative efforts to push opening times to match teenagers’ inner clocks.

The issue for the kids is their circadian rhythms, the biological clock that dictates when to sleep and wake up, are substantively different than those of adults. They suffer what’s known as “delayed sleep phase,” what seems to be a need for later and more sleep occasioned by puberty. This renders them “incompatible with aspects of modern society, notably early school start times,” as one study put it.

To an almost puzzling extent, many school officials have argued that the issue of teen sleep deprivation is overblown. They’ve claimed state usurpation of local control (this was a common cry in California), that later starts will result in greater transportation expenses, and that students will just stay up later and turn up at school equally tired. They also argue that later start times cut into after-school time for homework, sports and jobs.

The objections can be countered fairly easily. Leaving the decision to individual districts just means the issue will be fought over and over again. Greater transportation expenses? A number of districts that staggered high school start times found they saved money, since they could employ the same bus drivers to do multiple trips.

But it’s when schools claim teenagers won’t benefit that the case for earlier start times completely falls apart. The evidence is impossible to dismiss.

Studies of schools that have already made the switch show teens — who all too frequently stay up into the wee hours of the morning — do not take advantage of later school bells to stay up even later. Instead, they get more shut-eye — about a half-hour a night, according to a study published in the journal Science Advances, after Seattle shifted its high school start time one hour later. They are also less likely to be late for their first class.

And their work benefits, too. When the suburban Denver community of Greenwood Village shifted its junior high school start time from 8 a.m. to 8:50 a.m. and high school from 7:10 a.m. to 8:20 a.m., students were less likely to claim they were too tired to complete their homework. Standardized test scores go up. The way they spend their leisure time improves, too. A 2019 paper in the Economics of Education Review found teenage boys with later school start times spent less time watching TV and playing video games.

Later start times improve both physical and emotional health. At a time when children’s mental health issues are in all but a crisis, a later school day can mean lower rates of self-reported depression among teens, according to a 2010 study in the journal Archives of Adolescent and Pediatric Medicine. And student athletes who get more sleep are less likely to get injured.

Shifting school starts is so powerful that Teny Shapiro, an economics professor at Santa Clara University, has found beginning school an hour later is the functional equivalent of cutting class size by a third. As for parents, the change makes getting their kids up in the morning easier. Andrea Howe, a California parent, told me when her two high schoolers needed to get to their first class by 7:50 a.m, they were “zombies.”

But the status quo works for teachers, many of whom would like to hit the snooze button on making this change. When Education Week recently asked teachers to comment online about their preferences, many said they believed the gains were exaggerated. Others talked about the inconvenience — to themselves. “Teacher absences are up because they can’t get those 4 p.m. appointments anymore.” Cue the tiny violin.

Are there downsides to the shift? Certainly. It’s true that the added afternoon time can cut into extracurricular activities or work after school . But we shouldn’t be asking high school students to endure chronic sleep deprivation so they can take on one more activity — and it’s worth noting that students working more than 20 hours a week can lead to worse academic performance.

In the United States, we like to say we put children first. Pushing high school start times later would be an easy way to do so. Kudos to California for taking the issue of older children and sleep seriously — now it’s up to other states to heed the alarm.