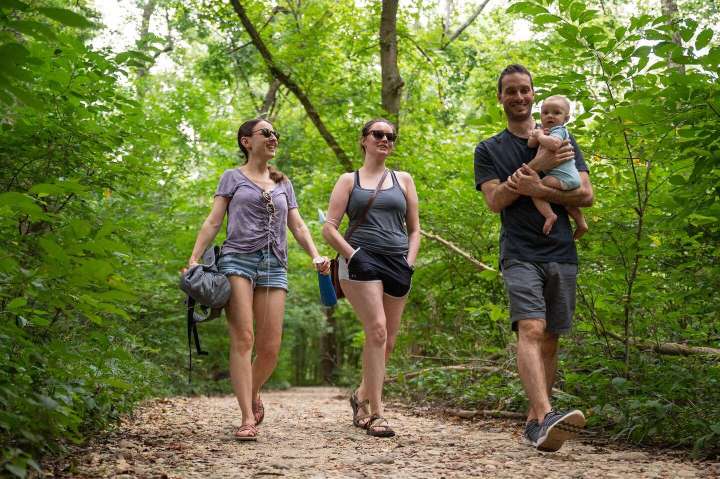 Year-round, elegant colonials and ramblers, with their classic details, red brick and stonework, grace Colonial Village in Northwest Washington. But each year in May, these homes — many of them dating to the 1930s and 1940s — reveal their most lovely secrets in a self-guided garden tour. For some neighbors, it’s a highlight of the year.

“Sometimes, from the front of the home, you just never know,” neighborhood resident John Goodloe Jr. said of the hideaway landscaping and pollinator gardens the tour reveals. “What really makes it special is that even a home that you think is just like any other home, when you get a chance to go inside, you realize that it’s something unique.”

Goodloe, 45, grew up in Petworth but attended Shepherd Elementary and fell in love with the neighborhood young. He and his wife moved to neighboring Shepherd Park in 2005 before buying their home in Colonial Village in 2019; their 14-year-old just completed eighth grade at Deal Middle School.

Residents find plenty of reasons to stay in Kings Park

Colonial Village is a hideaway green gem at the northern tip of Washington, edged on nearly every side by the lush, leafy wilderness of Rock Creek Park. On streets facing parkland, such as Parkside Drive NW and Portal Drive NW, homeowners tend to take full advantage of the view with prominent picture windows. Shaped like a butterfly, the neighborhood includes some 400 homes bounded to the east by 16th Street NW and to the west by the park and the D.C.-Maryland border.

According to the Shepherd Park Citizens Association, the neighborhood organization supporting both Colonial Village and Shepherd Park, the history of Colonial Village began in 1930, when a developer, the Edson W. Briggs Company, began building replicas of historic American colonial homes. The first was a reproduction of the Yorktown, Va., house where George Washington accepted England’s surrender to end the Revolutionary War in 1781.

As the neighborhood took shape in the decade that followed, it was also part of a darker history: the exclusion of Black and Jewish people from ownership. Goodloe, who is Black, uncovered his 1939 home’s original restrictive covenant earlier this year when he looked up the deed. Racial restrictions on homeownership were struck down by the Supreme Court in 1948, and the diversity that has blossomed in the neighborhood since then is all the more meaningful in light of the ugly past.

“I fell in love with the neighborhood before,” Goodloe said. “But then recognizing this transformation and our part in that just made me appreciate our place and space in it that much more.”

Colonial Village sees little annual turnover. Brenda Mejia, an agent with Compass who moved to Shepherd Park in 2013 and has been selling homes in Colonial Village since 2017, said just 11 homes have sold in the neighborhood this year, ranging from $2.8 million for a five-bedroom, 5,400-square-foot updated residence with a cobblestone front to $985,000 for a three-bedroom on 16th Street. No homes are currently on the market, she said.

“A lot of people don’t even know about this neighborhood, because it is a little bit off the beaten path. And there’s no Metro, there’s no sign when you go by it,” she said. “So people either grew up here and return, we have a lot of that. Or they learn about it from a friend or their Realtor. I think mostly word of mouth — that’s my impression about how people end up here.”

Kate Snyder, 48, who moved to Colonial Village with her husband, Seth, in 2014, said their 7-year-old loves walks and bike rides in Rock Creek Park. The nearness to nature, she said, became even more valuable during periods of pandemic isolation.

“This is the first time in my adult life that I’ve had windows on all four sides of my house; it’s great. And it made covid so much more bearable, to be able to have a space in my backyard to sit,” she said. “This is a really nice neighborhood to raise kids and have a family.”

The neighborhood is entirely residential, with no commercial district. But residents say Silver Spring, a short walk to the west, offers the benefits of a nearby downtown. Parkway Deli and Restaurant, just over the border in Maryland, is a particularly popular spot for a bite. Most are also looking forward to a major redevelopment of the historic Walter Reed campus, just east of 16th Street. That project, expected to be completed in 2023, will include a row of new retail options anchored by a Whole Foods.

Ed Atkins, 77, who has lived in Colonial Village since 1996, said he monitored that development while serving on the board of the Shepherd Park Citizens Association and is enthusiastic about the added value it will bring to the area. Atkins said another favorite nearby spot is the AFI Silver Theater and Cultural Center in downtown Silver Spring, which shows a mix of classic films and new releases.

But for him, too, the greatest local attraction is the park.

“I go for walks and observe nature, the changing seasons,” he said. “And I think it just brings a peaceful feeling to me.”

Transit: The D31 and S9 bus lines have stops along 16th Street NW; the nearest Metro station is Takoma on the Red Line, 1.5 miles outside neighborhood boundaries to the southeast.