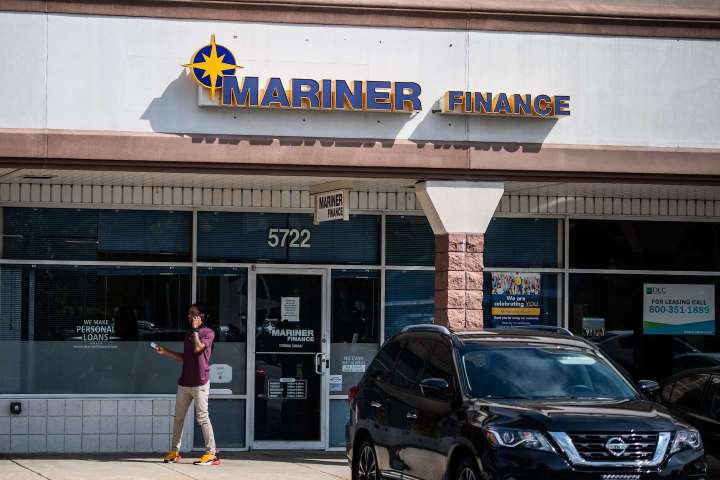 A loan company controlled by one of the nation’s largest private-equity firms is engaged in a nationwide scheme that takes advantage of low- and moderate-income consumers, according to a lawsuit filed by five states.

Mariner Finance adds costly insurance policies and other products to loans without the knowledge of borrowers and deceptively induces them to refinance their debts to generate fees for the company, according to the lawsuit filed Tuesday by attorneys general in Pennsylvania, New Jersey, Utah, Washington, Oregon and the District of Columbia.

‘A way of monetizing poor people’

The lender is owned by an investment fund managed by Warburg Pincus, a Wall Street private-equity firm. The president of Warburg Pincus is Timothy F. Geithner, who, as treasury secretary in the Obama administration, condemned predatory lenders.

“Mariner’s unlawful behavior is motivated by the high-growth demands of its owner,” said the lawsuit, filed in U.S. District Court for the Eastern District of Pennsylvania.

The company “padded its bottom line by deceiving hard working [people],” Pennsylvania Attorney General Josh Shapiro said in a statement. “Products consumers never asked for and often didn’t realize they’d been signed up for were tacked on to a kind of loan that we already know people struggle to pay back. These tactics are predatory.”

Executives at Warburg Pincus and the lender denied any wrongdoing.

“Mariner Finance delivers a valuable service to hundreds of thousands of Americans who have limited access to consumer credit,” according to an emailed statement from Warburg Pincus. “Throughout our ownership of Mariner, Warburg Pincus has always supported ethical business conduct, compliance with all applicable state & federal regulations, and a high standard of customer care.”

The statement noted that the company’s operations are subject to frequent examination by state regulators.

State officials said they began investigating Mariner Finance after The Washington Post published a story in 2018 featuring the company and the role of private-equity firms in consumer lending.

The Post story detailed the company’s practice of mass-mailing live checks to consumers who, if they cashed them, were obligated to repay the money at interest rates of over 30 percent.

Mariner’s targets “are often in financial crisis, decidedly unfamiliar with receiving unsolicited checks in the mail, and in desperate need of economic relief,” according to the lawsuit. “Mariner uses live checks as an entrée to the most vulnerable portion of the targeted population.”

The story also reported that the company made millions of dollars from the sale of insurance policies of questionable value and, while it borrowed money at rates as low as 5 percent, the company charged interest rates as high as 36 percent.

The Wall Street private-equity firm was instrumental in Mariner’s growth. When Warburg Pincus acquired Mariner, the company had 57 branches in seven states. Today, it has over 480 branches in 27 states. Mariner manages $2 billion in loans every year, according to the lawsuit.

“Over the course of nearly four years, Mariner has cooperated with the investigation and provided data, documents and testimony that clearly demonstrates the legality of its products and the vital support they provide to consumers,” Mariner founder and chief executive Josh Johnson said in a statement. “The states’ allegations are based on minimal consumer interviews, the details of which were never shared with Mariner, and reflect a misunderstanding of the law, or simply a decision to ignore any evidence which negates their claims.”

“A full and fair consideration of the investigation evidence should lead to this matter being immediately dismissed with no further action,” Johnson said.