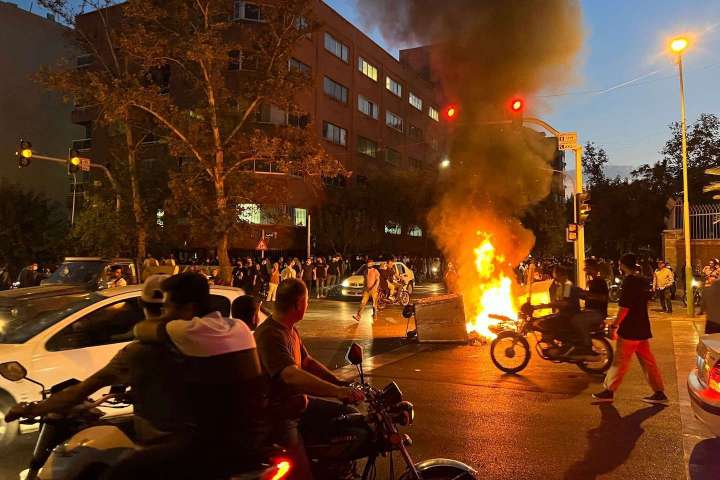 Protests in Iran over the death of a young woman while in the custody of its so-called morality police continued into the fifth day, with at least seven people killed and hundreds injured or arrested, according to activists.

The death of Mahsa Amini, 22, a Kurdish woman from western Iran, during a visit to the capital last week has stirred outrage over the government’s increasingly strict enforcement of ultraconservative dress codes for women, compulsory since Iran’s 1979 revolution.

The case has drawn worldwide interest and condemnations from the United States, the European Union and the United Nations.

Amini was detained as she exited a metro station, and she suffered a heart attack and slipped into a coma while in custody, state-affiliated media said. Her family insisted that she had no previous health problems. Activists asserted that she may have been beaten by police. Authorities released edited CCTV footage of Amini at the police station, but her family has demanded the release of unaltered footage.

The heightened international scrutiny of Iran’s human rights record comes as its arch-conservative president, Ebrahim Raisi, gave his first speech to the U.N. General Assembly in New York on Wednesday. Raisi did not address Amini’s death, and accused the West of having a “double standard” on human rights.

Wednesday was the fifth day of unrest across Iran, with protests in numerous places, including Tehran, the capital. Two people were killed Tuesday as security forces fired on protesters in the Kurdish city of Saqez — Amini’s hometown — while two more died in the town of Divandarreh and a fifth was killed in Dehgolan, according to Hengaw, a Norway-based rights watchdog.

The claims could not immediately be independently verified by The Washington Post.

In Tehran, photos from the scene of one protest showed demonstrators crowded around a burning motorcycle. Videos posted on social media appeared to show protesters injured after clashing with authorities. Internet access was restricted in parts of the country.

Other images showed protesters burning headscarves and shouting slogans attacking Iran’s supreme leader. Some used Amini’s Kurdish first name, Jhina, in a reference to discrimination Kurds face in Iran. Among those arrested was Yalda Moaiery, a prominent photojournalist, her father told the Committee to Protect Journalists.

The governor of Kurdistan confirmed the death of three protesters, which he described as “suspicious.” The semiofficial Fars News Agency reported that security forces dispersed demonstrators in a number of cities, and that police arrested the leaders of some of the protests. State media has covered the protests, but has described them as illegal, violent and caused by instigators.

In an apparent effort to calm the public, the provincial aid to Ayatollah Ali Khamenei, Iran’s supreme leader, paid a two-hour visit to Amini’s family home Monday and promised that “all institutions will take action to defend the rights that were violated,” the semiofficial Tasnim news agency reported.

Authorities shared edited video from a CCTV camera that showed Amini looking healthy while entering the police station, and then later showed her collapsed on the ground and being brought to an ambulance. But her family has demanded the release of the entire footage, calling the clips insufficient evidence.

The police commander of the greater Tehran area told reporters that Amini was wearing a hijab that violated rules requiring women to wear a headscarf and dress conservatively. He said she didn’t resist detention and even made jokes in the police van.

Amini’s father, Amjad, said that the week before the incident they had been in Tehran without problems.

“There was no problem with my daughter’s manto,” he told the state-backed Tasnim news agency Tuesday, referring to a long coat that women in Iran wear as part of the required dress code, “and she was wearing hijab.”

Iran doubles down on abortion and contraception restrictions

U.S. Secretary of State Antony Blinken called on the Iranian government “to end its systemic persecution of women and to allow peaceful protest,” in a tweet Tuesday.

The acting high commissioner for human rights at the United Nations, Nada Al-Nashif, issued a statement Tuesday expressing alarm at her death and calling for an independent investigation.

“Mahsa Amini’s tragic death and allegations of torture and ill-treatment must be promptly, impartially and effectively investigated by an independent competent authority, that ensures, in particular, that her family has access to justice and truth,” she said.

“The authorities must stop targeting, harassing, and detaining women who do not abide by the hijab rules,” Nashif added, calling for a repeal of mandatory hijab regulations.

In its own statement Monday, the E.U. said what happened to Amini was “unacceptable and the perpetrators of this killing must be held accountable.”

Before leaving for New York, Raisi told reporters at the Tehran airport that he has no plans to meet with President Biden on the sidelines of the event, the Associated Press reported. Indirect negotiations between Washington and Tehran to revive a 2015 nuclear deal appear to be close to stalled.

Raisi, a hard-line cleric who assumed office last year, has called for strict enforcement of the dress codes. Last month, a video appeared to show a woman detained by Iran’s increasingly assertive guidance patrols being thrown from a speeding van.

The government crackdown sparked a protest movement over the summer by Iranian women, who photographed themselves without headscarves and posted the pictures on social media.

Kareem Fahim in Istanbul and Paul Schemm in London contributed to this report.