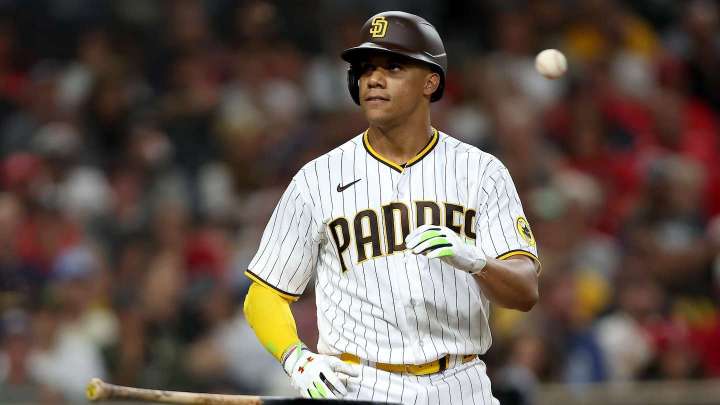 When the Washington Nationals were mulling a trade of Juan Soto at this season’s deadline, they asked an exorbitant prospect price. Soto is a rare talent, so they had to ask for a rare return. But even more uncommon were the circumstances in which they decided to trade him — namely, that any team that acquired Soto in August would have him for at least three playoff pushes. For teams such as the San Diego Padres, who plan to contend for the next three seasons, his impact could be legacy-altering.

But until recently, Soto was largely quiet as the desperate Padres clung to their wild-card spot. He was hitting so poorly, so un-Soto-like, that he was far more noticeable in his offensive absence than his presence in the middle of the order. He battled a back injury in late August that forced him out of the lineup. He drove in a run just once every five games. He looked a little more fidgety in the box, a little less certain about the Soto shuffle, a little more — frankly, uncomfortable.

How Albert Pujols pulled himself to the cusp of 700

But unfortunately for anyone who hoped the Padres would have a compromised version of Soto in their wild-card series matchup next month, he is looking much more comfortable now. Since Friday, Soto is 7 for 15 with a home run, six RBI and two doubles. The Padres are 4-0 in that span. Still, since his arrival in San Diego, Soto entered Wednesday batting a very un-Soto-like .231 with a slugging percentage of .373 in 39 games (compared with .246 and .485 in 101 games with the Nationals).

What turned things around for Soto probably will be clearest in hindsight, and a four-game revival does not a full recovery make. But the fact that he struggled should be no surprise for a player who showed himself prone to trying a little too hard to do a little too much when the star power around him in D.C. waned.

Perhaps anyone who just turned down the biggest guaranteed contract in baseball history only to be traded to a team desperate for October greatness in exchange for a massive prospect haul would be, particularly if his new team lost its other young savior to a performance-enhancing drug suspension shortly after his arrival.

For example, Soto has always been at his best when he is scattering batted balls around the field, when the line drives to left center seem to come with ease. In his career, Soto has pulled about 41 percent of balls he has put in play. In August, that number jumped to 53 percent. In September, it has been 50 percent. Soto pulled one of his two base hits against the St. Louis Cardinals on Tuesday night. He also rolled over a groundball to the right side.

But his first hit of a 2-for-3 evening in which he walked and drove in a run, seemingly a classic Soto showing, was a groundball through the wide-open left side on a pitch a few inches off the plate. It wasn’t the kind of deep line drive to left center that makes Soto special. But he was able to wait nonetheless.

“Whenever I start hitting the ball to the other way, it’s starting to go well,” Soto told the San Diego Union-Tribune on Sunday after his first three-hit game as a Padre. “Tonight, I didn’t hit it to the other way, but [doing so more recently] tells you that I’m feeling better, that I’m being patient, I’m seeing the ball better.”

“Patience” has been an interesting word for Soto since the trade, in part because Soto has not been chasing more pitches out of the zone than normal. In fact, he has been swinging less often — at pitches in the zone and out — than his career averages suggest he normally does. Since he debuted in 2018, Soto has swung at 37.5 percent of pitches he sees and chased 16.5 percent of pitches that come his way out of the zone. Both rates dropped by a few percentage points in August and September, leaving his walk rates slightly higher in his two months with the Padres than his career averages.

But for Soto, who is at his best when he allows the ball to travel further toward home plate than others can allow before casting the barrel to it in time to hit line drives the other way, patience is often as much a question of timing as it is pitch selection.

And tweaks to his timing could help him restore a more familiar contact profile: Soto has never exactly been a poster child for the launch angle revolution. His career average of 8.3 degrees is about a third of Mike Trout’s average this season and is well below the major league average of 12.1. Twice in the past four seasons, including this one, Soto has maintained an average launch angle above that 8.3 degree mark. His on-base plus slugging percentage in those two seasons is below .950. In the two seasons in which his launch angle was below his career average, Soto’s OPS was .999 or higher. His launch angle in August was 12.1 degrees. His launch angle in September, entering play Wednesday, was 13.6 degrees.

Unsurprisingly then, Soto has hit groundballs at a lower rate than his career norms over the past two months. He has hit more flyballs. He has hit significantly more popups. Just 4.6 percent of the balls Soto has put in play since he debuted qualified as popups. In September, nearly 12 percent of his contact has resulted in a popup.

While groundballs find holes and flyballs can carry, popups rarely forgive the one who hits them. On Tuesday night, Soto didn’t hit the majestic line drives to left center that suggest he is at his best. But he hit three groundballs, two of which found space as hits. In those past four games, he hasn’t popped out once.

Four games are too small a sample to declare Soto fully resurrected. And indeed, multiple teams that could face him in October have had advanced scouts following the Padres in recent weeks. They will know what was going wrong when he was struggling. They will know exactly how much he has corrected by the time the Padres get there, to a wild-card series that would match them against the defending champion Atlanta Braves if the season ended Wednesday.

And all jokes aside, no opponent would rather face the Padres with Soto than without him, no matter how much he has struggled since landing in San Diego. If he is anything like the Soto the Padres traded for, anything like the Soto who did things in his early 20s that no one has done before, he has the power to alter a three-game series — or any series, really — more than just about any other offensive threat in baseball.