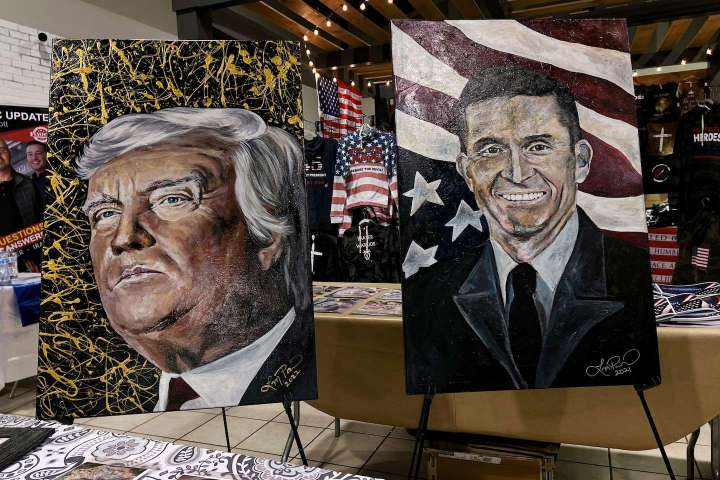 This summer, I attended the promotion ceremony of a friend, an Army general who was pinning another star on his uniform. A Christian chaplain said a blessing and then the speakers extolled my friend’s lifetime of service to the country. Finally, the general took the oath of office on a Bible held by his wife. It was all very traditional and very moving.

If you think there is anything remotely surprising about this — if you imagine that the speakers would have been extolling the joys of transgenderism or denouncing white privilege — well, you’ve been watching too much Fox “News.” Donald Trump Jr., for example, claims a “militant female” can become an admiral or general in today’s military “for no other reason other than they’re probably female,” or “if you can say, ‘Hey I’m trans.’ ” Tucker Carlson asserts: “It has been one calculated humiliation after another for the U.S. armed forces: vax mandates, anti-white ideology, sex changes, drag shows. Whatever is necessary to telegraph to the United States military you are worthless.”

Needless to say, these fanciful descriptions from bomb-throwers who never served in uniform bear no relation to reality. The U.S. military remains one of the most conservative institutions in America with traditions dating back centuries. That the military now welcomes African Americans, women and LGBTQ people — all groups that were kept out in the past — only strengthens an institution that needs to draw on the talents of the whole country to defend it.

So why are cartoonish inhabitants of the Fox News Cinematic Universe caterwauling about a “woke military”? Because the military has resisted Trumpian attempts to politicize it. The MAGA brigades want to populate the military with far-right officers who will do whatever Trump or a Trump mini-me commands, no matter how illegal.

Peter Baker and Susan Glasser’s new book “The Divider: Trump in the White House, 2017-2021” — the best account yet of the worst presidency — serves as a useful reminder of all the ways that President Donald Trump tried to harness the military to carry out his unhinged agenda. The authors report that Trump told then-White House Chief of Staff John F. Kelly, a retired Marine general, that he wanted generals as loyal to him as Nazi generals supposedly were to Adolf Hitler. (The stable genius had no idea that German officers plotted to kill Hitler.) Trump wanted “his” troops to shoot both undocumented migrants and Black Lives Matter protesters in the legs. He even listened to pleas from his disgraced former national security adviser, retired Lt. Gen. Michael Flynn, to have troops seize ballot boxes after the 2020 election.

Gen. Mark A. Milley, the chairman of the Joint Chiefs of Staff, became anathema to Trump & Co. not by embracing “critical race theory,” but by making clear that the military would place loyalty to the Constitution above loyalty to Trump. The turning point, Baker and Glasser report, came when Milley publicly apologized for being duped into walking behind Trump through Lafayette Square after it has been cleared of protesters. “Why did you apologize?” Trump demanded. “It’s a sign of weakness.” Ever since then, this combat veteran has been subject to unconscionable abuse from MAGA World. (Tucker Carlson: “He’s not just a pig, he’s stupid.”)

All of these attacks against the military for being too “woke” should be seen as part of the MAGA strategy to harness the armed forces (“the guys with the guns,” as Milley put it) to advance their authoritarian agenda. Blake Masters, the ultra-MAGA Republican Senate nominee in Arizona, has even advocated firing all the generals (“they’re left-wing politicians”) and replacing them with “the most conservative colonels.”

Unfortunately, there would be little to stop a President Trump or a President Ron DeSantis from doing precisely that as long as the Senate confirms their new generals. A MAGA president could even summon back to active duty loony retired generals such as Flynn or Don Bolduc (the GOP Senate nominee in New Hampshire) and appoint them to senior commands — as long as the Senate consents.

There would be no shortage of MAGA retirees to choose from: 124 retired generals and admirals, including Bolduc, signed an open letter last year that pushed false claims of voter fraud and argued that, under the Democrats, “our Country has taken a hard left turn toward Socialism and a Marxist form of tyrannical government.” If Trump wins in 2024, he could choose his Joint Chiefs from their ranks.

Little wonder that five former chairmen of the Joint Chiefs of Staff and eight former defense secretaries signed an open letter of their own warning that “We are in an exceptionally challenging civil-military environment” because of, among other events, “the first election in over a century when the peaceful transfer of political power was disrupted and in doubt.”

The growing chorus of MAGA complaints about the “woke military,” nonsensical as they are, indicate that the challenges will only grow. A homegrown extremist movement that has already captured control of one of the two major political parties is now trying to bend the armed forces to its supreme leader’s malign will.